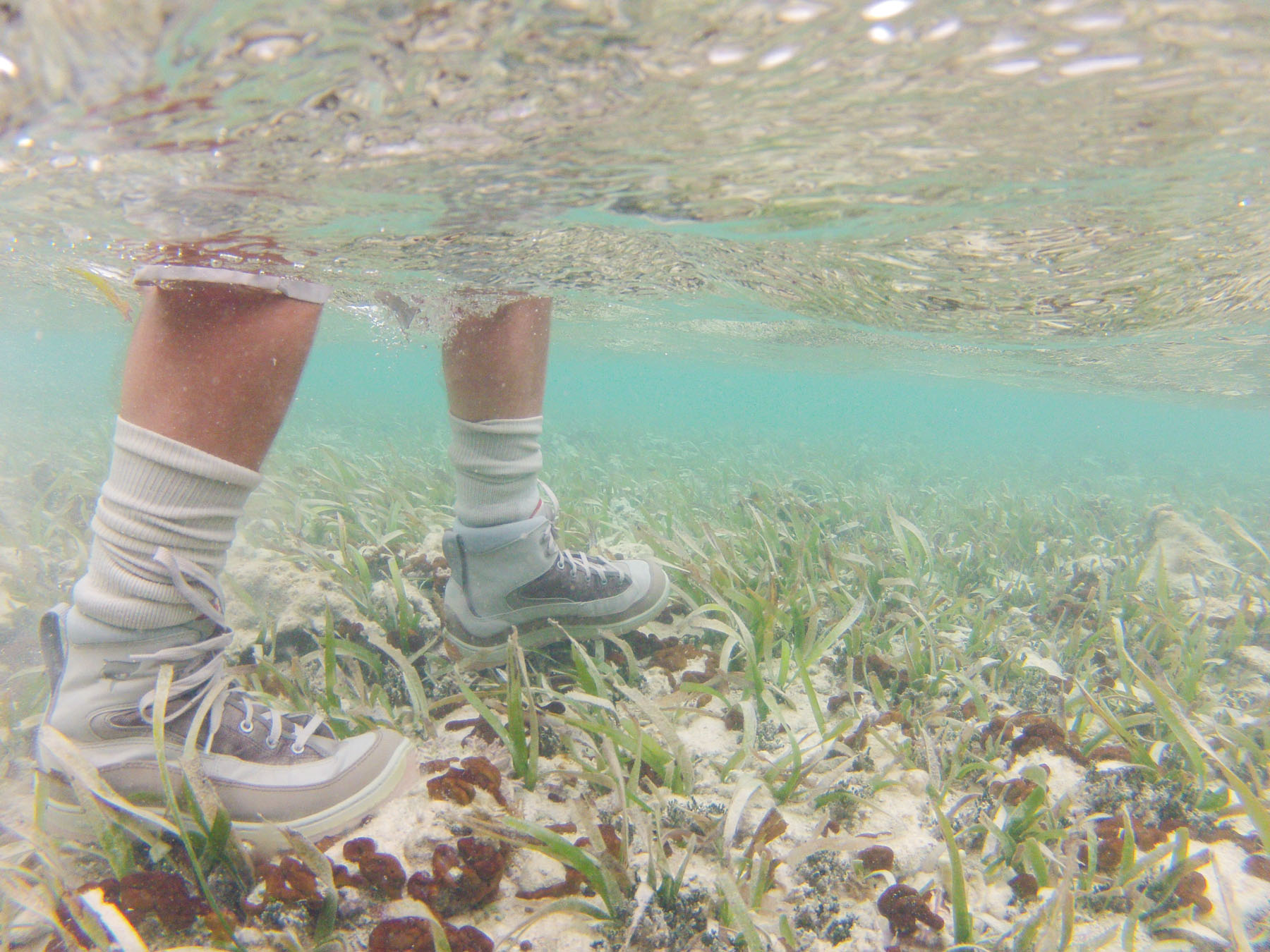 I will go to the grave stating that the only good reason to get out of a perfectly good boat is to put it on the trailer. However, I have come to the realization that while I still have not come up with a "good" reason, there are what I term "special" reasons that at times justify a fly fisherman's departure from a watercraft.

Until this past summer, you probably could count with your fingers and toes the number of times I have wade-fished. The simple truth is I hate to wade-fish; period. The one exception would be surf-fishing on foot. For some strange reason I have a fondness for that.

The reasons for my disdain for getting wet are numerous. For one, I have been popped by a stingray and have no plans for experiencing that kind of pain again. Then there are the aching feet and occasional sore muscles and joints that more often than not seem to accompany a hard day of wading. Or maybe it is the fact that, after a wade in the salt, no matter what time of year, I just feel dirty and grimy from head to toe. I'm sure there are other reasons that I could think of but...I digress.

Over the last year I have found myself fishing out of a larger boat designed and specifically rigged for fishing the beachfront and offshore. The panga is an incredible boat for running the beachfront however it is of little of use in water less than two foot deep. So occasionally we find ourselves having to wade because the weather occasionally drives us inland. It is for this reason I have started having people bring their wading boots. Having not waded on purpose for nearly fifteen years I find myself essentially learning how to do it all over again. Here are some of the things I have learned over the years and have had to relearn as I have taken to the shallows on foot as of late.

One of the biggest tips that I could give the wading fly angler is slow down. If you can hear yourself moving through the water or you are making a wake with your legs as you travel forward, you are moving too fast. Remember that when wade-fishing your vantage point is much lower than from the bow of a skiff. This makes spotting fish at a distance difficult unless they are tailing. So naturally, you will be closer to the fish when you are able to see them, and/or spook them. Also, having given up the vantage point of the bow, whatever fly line that is out of the rod tip, drags in the water. The point is that you want to get close to the fish for the easiest possible cast. If you need to cover the water faster I suggest taking longer, slower steps rather than shorter, quicker ones.

Another thing I see often, and another big no-no, is people approaching fish that are just out of their casting range while trying to cast and pulling line from their reel as they continue to close the distance. If a fish is just beyond the amount of line you already have off the reel, you have two options; strip more line from your reel and attempt the cast from where you're standing, or walk a little closer before making your cast. Never try to do both at the same time. More often than not, what happens while the person attempts walking, stripping line, and casting; they will be absorbed in too many things and absent-mindedly move forward too quickly, spooking the fish.

When wading, another good practice to avoid spooking fish is to always keep your feet in contact with the bay bottom, lightly shuffling your way forward. Lifting your feet (as though you were on land) can spook fish several ways, especially when the fish are extremely shallow and crawling with their backs out of the water. When fish are dragging their bellies on the bottom, I believe they can "feel" your footsteps. Another thing that happens when you lift your feet is that the water sloshes from beneath your feet making quite the racket below the surface. By sliding your feet you can avoid the fish detecting your approach.

Walking on top of shell is yet another way to spook fish. If you are fishing around reefs it is important to cast to the shell, not from it. Nothing will shut down them down like the sound of oyster shell crunching under a pair of wading boots. Which, incidentally, brings me to my next point.

One of the reasons I think that I have disliked wade-fishing so much over the years is because after wading an hour or so my feet would start aching and would continue to do so for the remainder of the day. The reason for this is because I never could find a pair of wading boots that fit my wide feet. I would have to buy boots that were two sizes bigger to wet wade and usually three or even four sizes larger if I was going to wear waders. And sadly, even getting oversized boots was not nearly enough. A couple of years ago the folks at Simms came out with some boots called OceanTeks. Finally someone introduced a wading boot that actually fits, which has made all the difference in my attitude towards wading. I can now wade all day long with no discomfort. To the point, it is important to have comfortable footwear if you are planning on wading all day long.

Also, for those times when you plan to wade all day, there are two things you can do to reduce fatigue and potential sore muscles and joints the following day. The first is to drink a lot of water before, during, and after your wade. Staying hydrated goes a long way to preventing soreness, as does stretching your joints and muscles before getting in the water. It has done wonders to make the days that I have to wade much more enjoyable and I suspect, that if it works for me it will work for you.