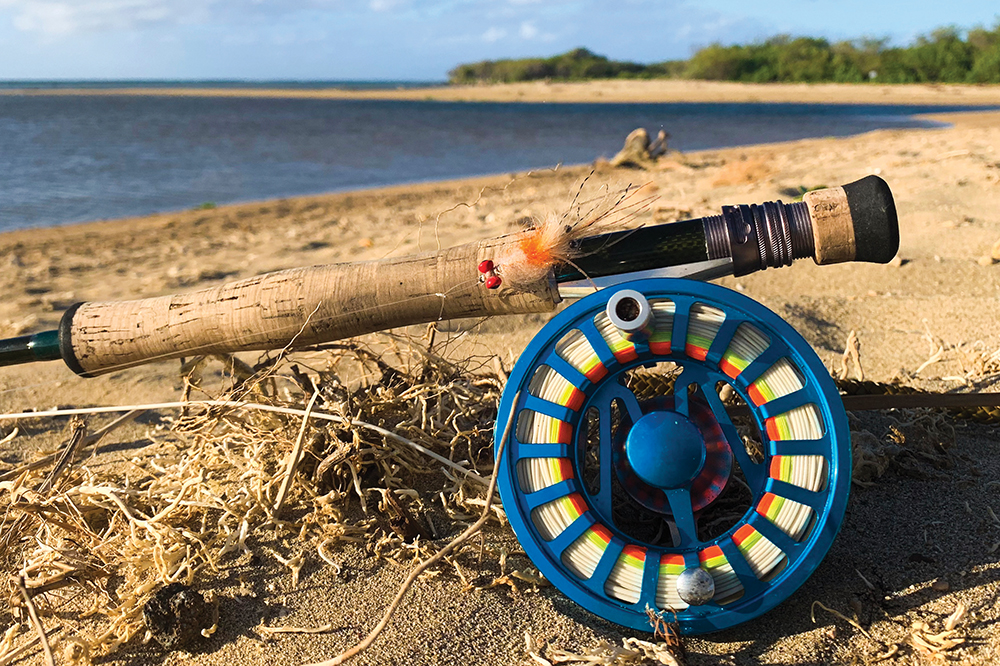 When it comes to fishing destinations, Hawaii comes to mind for anglers in search of large billfish and other pelagic species. Rightfully so, this chain of Pacific islands has produced some of the largest marlin landed anywhere in the world. However, an aspect of these islands that is often overlooked and little known to most anglers is their fly fishing.

Hawaii is one of the best kept secrets in the world for trophy bonefish; Oio in the native tongue. On the island of Oahu there are only a handful of flats that can be wade fished but rest assured there are plenty of fish to target. On top of chasing Oio, there is also a number of giant trevally that swim in the same waters. Fishing opportunities like these mixed with one of the most beautiful places on earth make it hard to pass a chance to visit.

Back around Christmas I called one of my friends to check up on him and see if he was going to be in town for the holidays. Since college he has been traveling the world and for the past year he and his wife have been living in Hawaii. During our conversation he mentioned that he wouldn’t be making it home this year but I had a place to stay if I ever wanted to come for a visit. Considering his offer, I thought when will I ever have a chance to go to Hawaii and have someone show me around and keep me away from tourist traps. I called him a week later, gave him the dates and said I’m on the way.

The time came and I had my bag packed with my 8-weight and a box of flies. I have never been bone fishing so this was going to be a completely new experience. I jumped on the plane and settled in for the eight hour flight. Staring out the window at the expanse of the Pacific Ocean, I am astounded that the Polynesians found these tiny specks of land more than 2000 years ago.

I finally landed and met up with my buddy. The next few days we explored Oahu, an incredible place with uniquely beautiful geography and scenery. The time finally came for fishing and I hired a local guide to take me on the flats to try for my first Oio.

I met Jacob at the boat ramp just after daylight and we hopped in his skiff. I looked down and noticed a beefy 12-weight outfit with a large colorful fly tied on. I assumed it was for trevally and asked what are the odds we would see one. He assured me it is not an everyday occurrence but he carried the rod for a reason. We arrive on a flat and hopped out. He gave me a quick rundown of where I needed to cast and how to strip the fly. I’ll be the first to say that I’m by no means a professional fly angler. In my experience with guides I’ve learned to be humble and do exactly as they say as they are the experts.

The weather wasn’t cooperating. We had rain clouds blocking the sun and the wind had picked up. No worries. It wasn’t long and I spotted a tail waving in the air. We made our way toward the fish and tried to get in position for a good cast. As quickly as the fish appeared it also vanished, so we continued on. The scene replayed for the next four or five sightingswith Jacob assuring me I’d get a shot soon. I looked up once again and spotted another tailing fish coming directly at us. I placed my fly directly in its path and waited for the command to begin stripping. I did exactly as instructed and watched as it showed interest for a few seconds, stopped right on top of it, and then spooked away. We had a good laugh and I was shaking from the adrenaline and excitement of what just happened.

Moving forward, I had a few more shots, some fish that didn’t want to cooperate and some that I completely blew. My redfish mentality had me casting just in front of them and Jacob patiently reminding that I needed to lead them by at least ten feet.

We finished our wade and decided to try poling a shallow reef. Jacob pointed to a fish and I made a long cast. He lost sight of it and just when we thought it was gone I felt a thump. I made a strip set and line whipped through the guides like I’d never experienced, nearly to the backing in a matter of seconds. She made a few more good runs but eventually I got her close and into the boat. My first Oio! We made a few quick photos, sent her back, and commenced the high-five routine. That one fish was more than worth all the missed shots and frustration.

We returned to the flat for another wade and before long we spotted a huge tail waving above the surface. We both knew this was my shot at a ten pounder. The fish was right on a drop-off which made it tough to see clearly, so I took my best shot and hoped. After a few small strips I felt the thump and my line took off again. After a short, hard run my line hit the reef and broke. These things happen but I have always found the “one that got away” stories as much fun as the ones I land. We didn’t have much time remaining and called it a day as I had a flight to catch.

That was one of the most fun and frustrating days of fishing I have ever experienced. I am completely hooked and fully understand why fly fishing for bones is so popular. On top of fishing and staying on the islands, we made a few hikes, ate some great food, and went to the famous North Shore to watch the surfers. I also got to visit Kauai, another small island to the west of Oahu. It was an incredibly beautiful place with colorful flowers, large ancient mangrove-like trees, and Waimea Canyon, which is often called the Grand Canyon of the Pacific.

It takes a long flight to get there but I would heartily recommend it to anyone who enjoys traveling and fishing. The sights, beaches, and food alone are worth the journey. Throw in world-class fishing and you have one heck of a vacation.