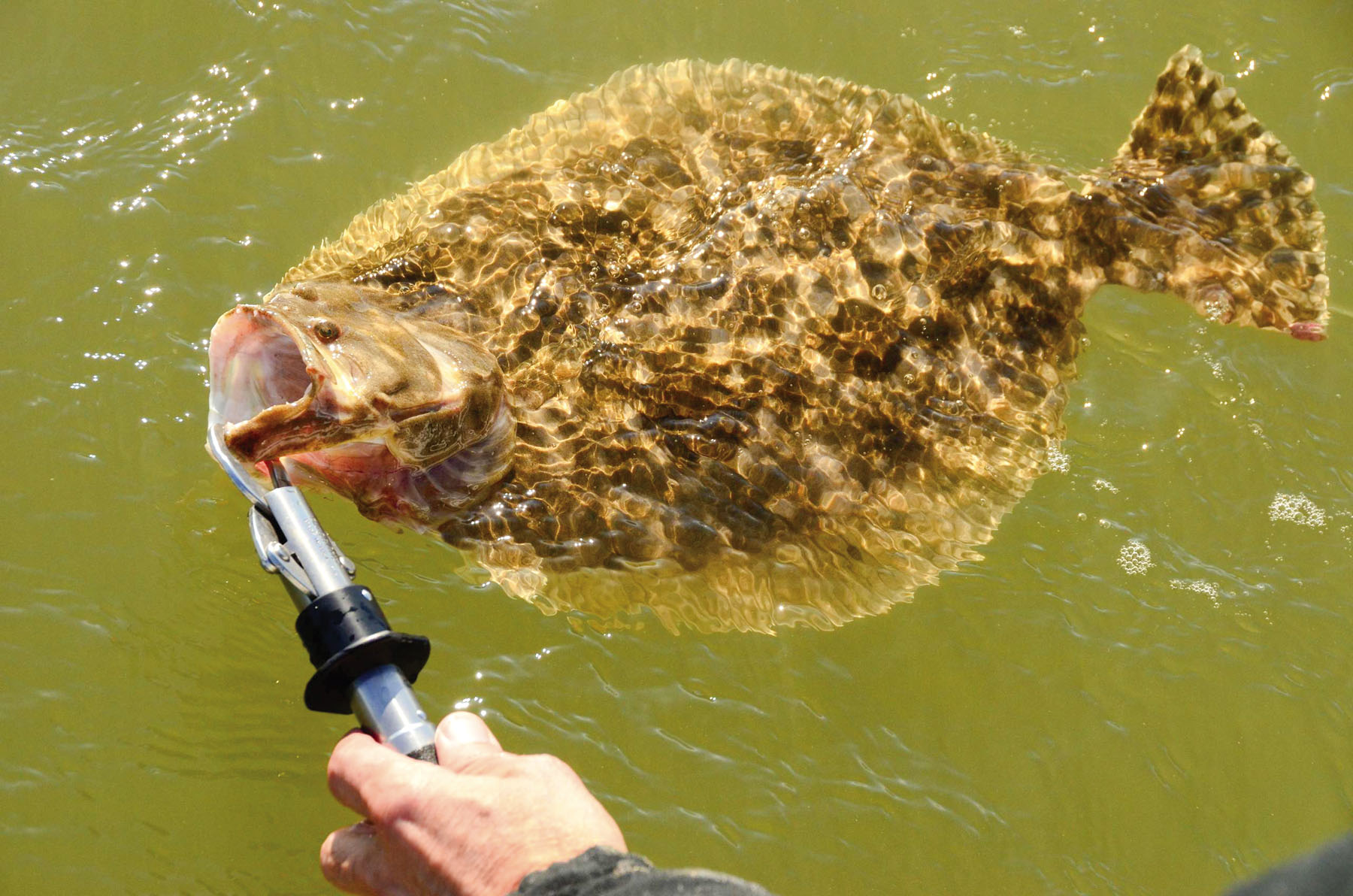 While sight-casting to flounder with any type tackle is rare, catching them on fly is not. In fact many fly anglers can count these bottom-hugging denizens as their first saltwater catch.

Most catches of flounder on fly can be attributed to the fisherman blind-casting a deep channel or bayou for speckled trout, others are incidental to the angler sight-casting to a redfish. When the red refuses the fly and the line is being stripped in for another presentation, an unseen flatfish will sometimes jump out of a pothole and engulf the offering. But, for those anglers willing to concentrate their efforts, the southern flounder probably ranks as one of the easiest caught fish on the entire Texas coast for the buggy-whipping club.

By design, flounder are the ultimate ambush feeders. They lie on the bay bottom, camouflaged, awaiting any tasty morsel to swim by. This is accomplished through their chameleon-like ability to change color to match their surrounding and also by their habit of wriggling into the sand or mud until silt covers their body. This process leaves only their eyes, which both happen to be on the same side of their body, protruding above the bay bottom. When a critter such as a shrimp, mullet, or mud minnow swims over the fish's eyes, wham! The trap is sprung. A maw full of sharp teeth takes hold and settles back to the bottom. If the baitfish is small enough it is just engulfed, but for a bigger meal such as mullet, the flatfish holds firm until it stops moving then slowly opens and closes its mouth until the meal is devoured. It is for this very reason that fly anglers have great success in catching flounder.

For most light-tackle anglers, the baits that they choose to throw are much too big for a flounder to get all the way into its mouth. This accounts for numerous missed or poor hook-ups. Lucky for the fly fisherman, most flies are the perfect size for a slam dunk, resulting in very few missed strikes.

Flounder, like any other fish can be found just about anywhere in our coastal waters. Whether in a bay shoreline, the Intracoastal Waterway, a marsh bayou, river, or a Gulf pass flounder can be found in all of these places. However, for the fly fisherman, learning to identify the points from which a flounder might choose to ambush its prey in these waters is the key to success.

Flounder typically choose to lie in areas where baitfish are funneled to them, which make them easy targets for the fly rod. The most obvious spots to find in our Texas bays are where there are small marsh drains or ditches between the bay and a backcountry lake. Some drains are as long as a football field and others are no more than a cut through a narrow strip of land.

On an outgoing tide, anglers should start out fishing where the water dumps into the bay and then move up into the cut, making their casts into the current. Working the bait with the current allows the fly to be fished on the bottom where the flounder are, rather than being pulled higher in the water column and out of the strike zone by the current. Anglers should also make an effort to cover every inch of the drain width-wise, from the shallow edges to the deepest part of the channel, because as the tide falls the fish will gradually descend from the shallow banks into the depths of the channel. As for the incoming tide, just reverse the process, working towards the bay.

When fishing bigger water such as a river, the ICW, or Gulf pass, flounder are usually found laid up on the shallow edges and drop-offs facing into the current, waiting for a meal. The best time to look for flatfish in these areas is during the fall run when the fish start moving towards the Gulf of Mexico to spawn. This migration varies somewhat from year to year in general though, it begins in late September, peaks sometime in November, and continues in some amount through December.

As for the method in which the fly is presented when fishing these bigger waters, the drill is the same, except the angler concentrates effort between the bank and the dropoff. This piece of underwater real estate can be anywhere from a foot or two wide up to 10 or 15 yards wide. Casting up current and keeping the fly near the bottom should pay off.

Anglers should also look for confluences where a smaller creek or bayou merges with another. Shoals are usually created on the points or corners where the two waters come together providing flounder the perfect place to lay up waiting for an unsuspecting school of baitfish to swim by...

The choice in tackle for flounder is about as simple as it gets. A 6-8 weight outfit will do in just about any situation, and because flounder fishing is rarely done in water deeper than about 5 ft, a floating line is all that is needed. The one exception might be when fishing a dropoff in big water where a strong current is present and getting the fly into the strike zone is difficult a sink-tip line could come in handy. Leaders should be the standard 8'-9' length with a 12-20 lbs breaking strength.

As for flies, baitfish patterns seem to work best. With that being said, it is very hard to overlook the fish catchingest fly of all-time, the Clouser Minnow. Tied in chartreuse/white or pink/white. Mr. Bob Clouser's creation probably accounts for more flounder landings than any other pattern out there. Just toss it out and bounce it off the bottom, and let it work its magic. After that, I would say that a Seaducer tied with bead-chain or lead eyes to assist the fly in getting to the bottom is a close favorite. No matter, when choosing a pattern to fish, the most important things to consider are weight, hook size, and whether or not a weed guard is necessary. The weight of the fly is important to insure the fly stays in the strike zone near the bottom. Hook size is simple- #2 and #4 with a #2 being as close to a perfect choice for all sizes of flounder there is. As for the weed guard, I personally try to avoid it when possible, however there are times when that just isn't possible.

You have hooked-upnow what? Unless you have hooked a truly unbelievable "saddle blanket" of a fish, most southern flounder can just be stripped in. Don't get me wrong, flounder do fight they just do it a little differently than most fish. The flounder will likely try to run to deeper water, and then fight their way back to the bottom. This is where they put their unique body shape to work, struggling "broadside" to the rod. However, a large fish, especially if hooked on the flats, is quite capable of taking the line away from you.

Once the fish has been fought to hand or boat side, depending on if the angler is wading or fishing from a boat, handling the fish without a net can be tricky. For the angler in the boat it's a no-brainer to get the net out. As for the wading angler that probably does not carry a net, lead the fish up onto the bank or some matted grass to remove the hook.