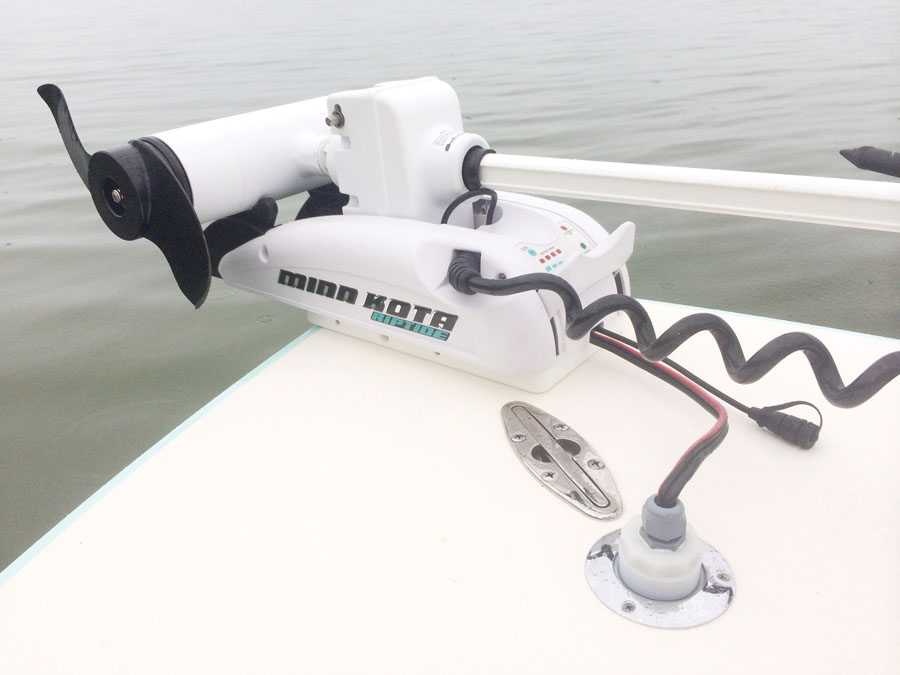 After two decades of guiding I like to think I have it all figured out. But that of course is my ego doing the thinking. In reality, I routinely come across new and better ideas that make my job easier. So this month I thought I would share some ideas and things I have either stumbled upon or been shown. Hopefully there is an idea or two you can put to use while searching for that next fish to chew on your fly.

For years I have placed a Sea Deck pad on the lids of my Yetis and turned the T-Latches around (neat trick on Yeti website to make the Tundra ice chest more fly line friendly) to make a makeshift bow platform. Well recently I got a new skiff which ultimately meant that I needed a new Yeti. I debated whether I should put a Sea Deck pad on it or perhaps a seat cushion to make long boat rides more comfortable for my customers. I decided on the cushion and everything was fine for a month or so until one day I decided to take the bow platform off of my skiff. It just so happens that the next day I wished that I had the platform back on the skiff. We came across a situation that required some elevation for the angler to see fish and so, I popped the cushion off and placed the Yeti on the bow. Needless to say my customer nearly busted his butt a couple of times before it occurred to me—why can't I have both? In short there was no reason I could not have the Sea Deck under the cushion. This set up has served me well a couple of times so far this year. yeticoolers.com

Fly fishermen are a restless bunch. None of us can seem to sit still very long before we are packing a bag and heading off in search of something more exciting. And, for the do-it-yourselfer, this usually means hooking up to the skiff and putting Texas in the rearview. Being one of these nomads I have always been nervous while traveling cross-country with my $1K plus push pole riding in its holders on the skiff. Yes folks, I have had them stolen while traveling. The solution of course comes from push pole king, Kevin Shaw, down at Stiffy. Shaw has developed the ultimate, screw together push pole ferrule that allows you to not only break down your push pole and tie it down to the luggage rack of an SUV but also to be able to have it short enough to be brought inside a motel room. In addition, the ferrule seems to be as strong as the pole itself and when put together, seems to be unnoticeable. stiffypushpoles.com

I have certainly gone off the deep end with this item. A year or so ago I had the pleasure to tie side by side with the master himself, Enrico Puglisi. After watching him tie for or a while on this very unique and monster-like vise, I finally had to question him about it. After hearing how great this vise that he had designed was and why, I was sold. I had to have one. Then I heard the price. Nope, I will not be spending that kind of money on a vise. A few months went by and I was at a buddy's house and he had gotten one. I asked him if he thought it was worth the price. "Every bit of it," he said. I sat down at his tying desk and knocked out a couple of bugs and was sold. The next day I was on the phone with Mr. P ordering one. I am not joking when I say, this vise allows you to put a fly at any angle you can possible imaging and by doing so, makes tying much more enjoyable. epflies.com

Here is another great idea from Mr. P. One of the toughest things in fly tying is to create nice flowing tapers whilst utilizing short, less than sharp tying scissors. Mr. P. obviously felt the same when he started using a pair of longer barber-grade scissors for creating his perfectly tapered EP flies. Again, a solution that is a little pricey in the grand scheme of things. But in my opinion, worth every one of the sixty-six hundred pennies. epflies.com

This is one that you should consider if you are buying a new boat or taking a skiff in to be refurbished. One of the biggest hassles of having a trolling motor on a fly fishing skiff is the snag factor that not only comes from have the trolling motor on the bow but also having the power outlet in the forward bulkhead. Mr. Brian Floyd of Islamarine came up with a way to not only eliminate having to run long wires (which means extra resistance for all you electrically savvy individuals) but also the line snagging potential of a plug in the bulkhead. In addition, it moves the plug inside the front compartment and out of the elements to help prevent corrosion for longer, trouble-free operation. He does this by utilizing a waterproof deck fitting with a cap that can be removed/installed when the trolling motor is in use or not needed and some PVC pipe fittings. For older skiffs needing a refurb, I recommend taking a road trip to the Florida Keys and having Islamarine not only install one of these plugs, but also to make your skiff like new again. Fortunately, the Maverick Boat Company was able to factory install this on my new skiff. If they had not been able to, I would have been trailering down to the keys for sure. islamarine.com

First let me say that I will never, on purpose, leave the dock without my titanium Van Staal pliers on my hip. However, there is another set of pliers that my boat never leaves the dock without. For many old-school skiff guides, there is only one pair of pliers that you will ever need—Manley Super Pliers. I remember the first time I saw an old rusted pair in my father's tackle box and did not think much about them. Then one day, many moons later, I had the chance to share a skiff with my dear friend and mentor, Flip Pallot. I was pretty surprised when instead of a pair of Able or Van Staal pliers on his hip he carried pliers like my Dad's. Then he explained the attributes of "parallel jaw" pliers. They can grip or cut anything with "unparalleled" strength. Pun intended. However, there are two downsides to the Manley's—made of carbon steel they require a lot of maintenance and also that they have a short reach. It is a good thing that they are inexpensive. tackledirect.com

Anyway, I hope I have shared some information that you will find helpful. Until next month…. Best of tides and stuff like that.