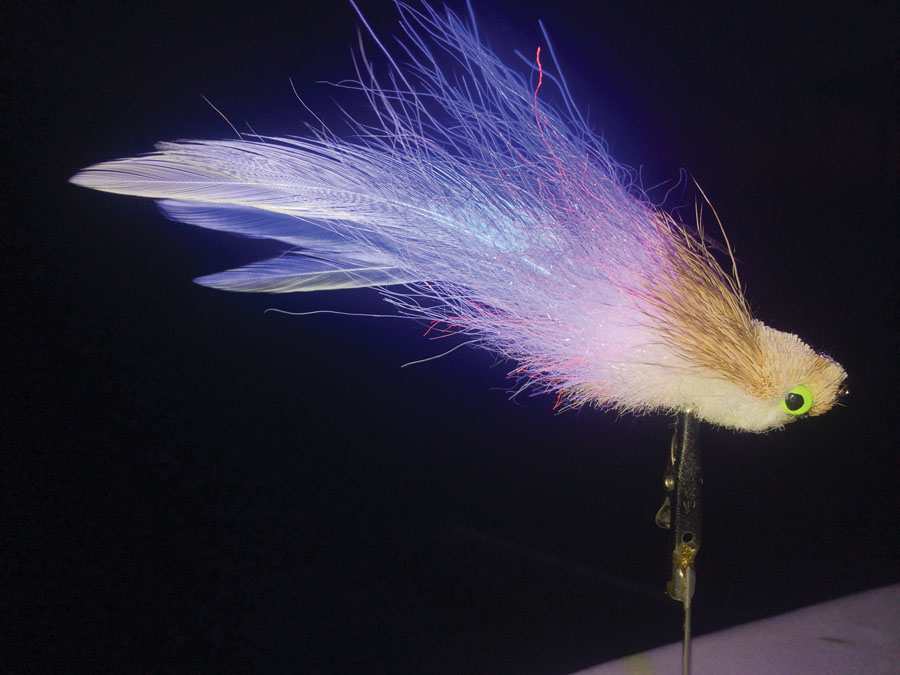 My guide buddy, Wright Taylor of Florida, always gives me a hard time about my old-school ways. No matter what it is that I do, he believes and regularly points out that I am too inflexible in my ways. I am ashamed to admit that this is not entirely untrue.

One of the many things I have been hardheaded about is the use of jig hooks in fly-tying. The reason, and you are probably going to laugh at this, is that most of the flies that I have ever seen tied on jig hooks are just outright ugly. I like my flies to be as close to perfect as possible, not only in function but also aesthetically. Now to the point; I am really starting to get into fishing flies tied on jig hooks.

You see, until just this past year, I knew of only two people who regularly fished flies tied on a jig hook, both of whom I hold in highest regard as anglers. The first, which many of you already know, was my predecessor in writing this column, Casey Smartt. Casey, if you do not know, is not only a talented angler and fly-tier but, he is just stupid good at everything he does. In fact, he has more talent in his pinky finger than I and many others have in our whole bodies. Anyway, Casey was fishing with me one day and he broke out one of his flashy-looking Clouser Minnows tied on a jig hook. Sorry Casey but, while it might be a fish catching son-of-a-gun, that thing was ugly by my standards of what a fly should look like.

The other person I know that likes to fish jig hook flies is the legendary Steve Huff. Now I have never personally seen Mr. Huff's fly box but I have spoken with him about flies and seen images of his jig flies. It is clear that he fishes a lot more than I do. Meaning, that by matter of necessity, he does not have time to sit at the vise and make all of his flies perfect as I always try. I would trade places with him any day of the week.

Anyway, upon my arrival home from Florida early last summer, Wright called and asked whether I ever tied with jig hooks. My immediate response was, "No, I don't like them because they look ugly."

"Have you tried them?" he asked.

His response was of course along the lines of hardheadedness described above.

Anyway, he sent a cell phone image of one that a friend had tied and I mumbled to myself, "He could have at least tried to make it look good."

Well, it just so happened that I had a boxful of jig hooks in assorted sizes and I sat down at the vise and a jar of rye and got to work. It took a couple attempts to come up with an "up-to-snuff" pattern but it did eventually happen. And, through a few iterations it turned out to be just outright sexy. Even better, my experiments turned one sexy fly into four sexy flies.

So now let me tell you why a fly tied on a jig hook is so special. The reason for it is simple. If the weight (lead or bead-chain eyes) is below the eye of the hook, the fly will ride hook up. This is the basic principle behind many redfish and bonefish flies but, because of the extreme bend in the hook near the eye, this puts the center of gravity lower yet, making the fly run in even truer hook up fashion. This hook up attitude (of the fly) is enhanced even more by the placement or trimming of materials. By the way, a fly that always rides hook up is a great advantage when fishing shallow waters, especially over oysters and other bottom snags.

Now for a brief description of the fly that changed my mind about tying with jig hooks. First, just imagine one of the finest redfish flies ever- the Borski's Bonefish Slider. Now imagine that fly on steroids. Seriously, the fly that I did is nothing more than a large "slider" tied with slightly different materials. (Remember folks, there is no such thing as a new fly pattern anymore. All we can do is take someone else's pattern and modify it to suit our needs).

What I did was, instead of a craft fur tail, I utilized bucktail and saddle hackles, and then wound and trimmed the body with an EP Foxy Brush (Sommerlatte's U/V Blend or Grizzly). Before winding on my brush, I tied in some eyes below the hook-shank which allowed me to then wind the brush around the eyes, somewhat burying them. Once that was done I trimmed the bottom of the fly leaving the brush full to fill the hook-gap and to assist in righting the hook (hook up aspect). Then, to finish it off, I added a clump of deer hair with the bristles filling the hook-gap and trimmed. Viola! the Borski Super Slider.

The results of fishing with this fly have been spectacular so far. In my Texas home waters it has proved very effective on blind-casting for reds and trout (again, as it was originally tied, it was large and moved a lot of water). As for Florida, it has attracted snook, redfish and even tarpon.

Well folks, despite of my latest revelation at the vise, I am still hardheaded and inflexible. However, I do recognize the need that I have for change. What is it that they say... the first step in recovery is recognizing that you have a problem?