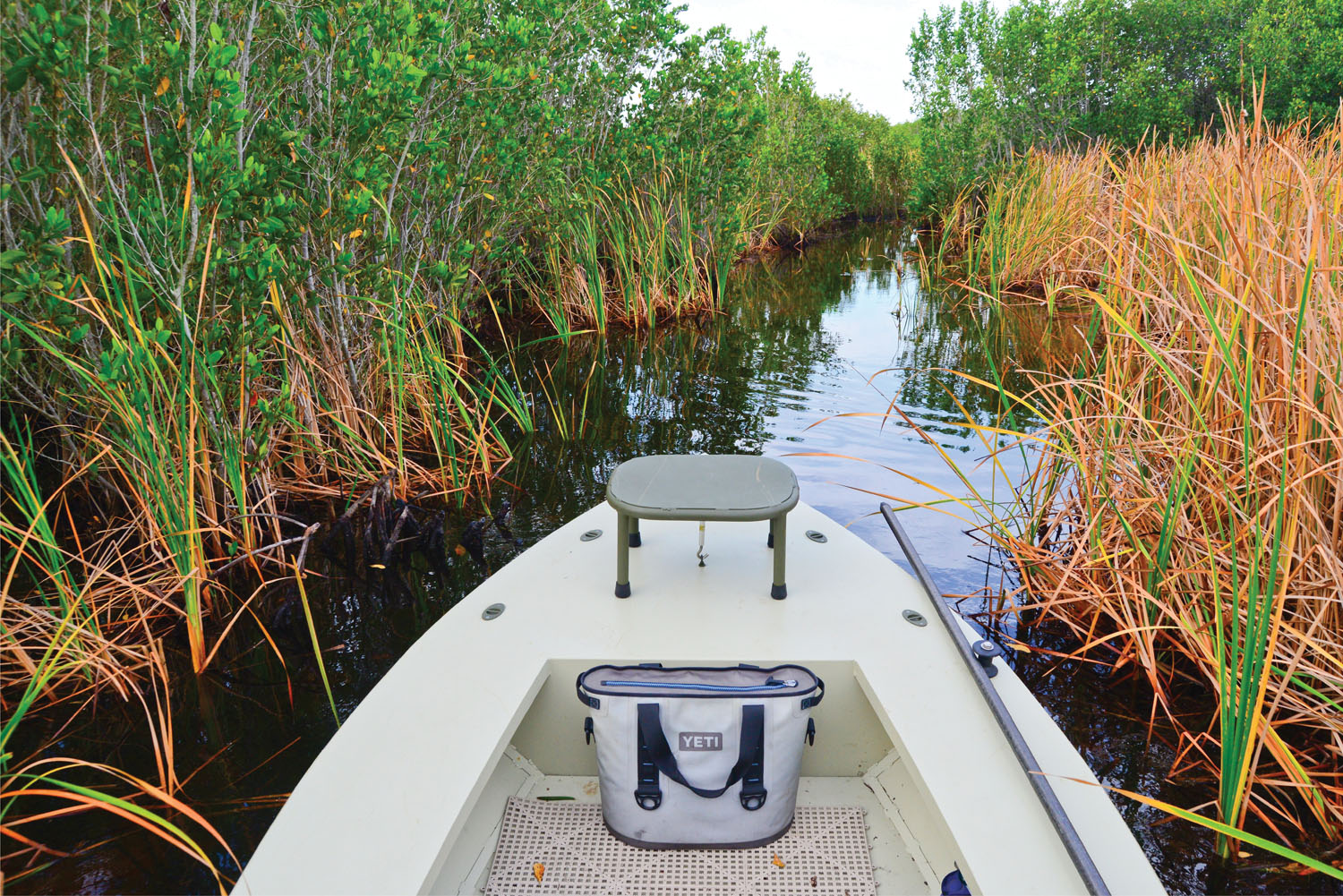 Everybody has heard the saying"Everything's bigger in Texas."

But as fly-fishermen, we shouldn't always think that way. Sometimes going small can make the difference between catching fish and heading to the dock smelling like a skunk. However, while downsizing has some distinct advantages, it can also have some equally distinct disadvantages. Let's explore the pros and cons of going small, both in Texas waters and beyond.

For example: You're fishing the flats in springtime and there are pods of tailing redfish everywhere but there is not one fish in sight over about 21 inches. Well it is springtime and the water is cool, so why not break out the 6-weight and have a little fun? Or, what if you're in some back country creek in Mexico or Belize fishing for baby tarpon? I know I would want to have a 6-weight. Another great time to have a lighter rod on the boat is when you're fishing super calm water for maybe a trophy trout when the water is slick calm, the fish are up shallow and spooky as hell. A delicate presentation is required and this is a perfect time to go light.

The above are all good examples of when going smaller is a good thing. Now let's look at when it is best to leave the lighter rod either in the skiff or even at home, even when targeting smaller fish. Let's say you have bailed out of the boat to go on a long wade, and with numerous pods of smaller redfish present have decided to take your 6-weight. Now you are a half-mile from the boat and the wind picks up. Well, you're going to end up wishing you had your 8-weight. Another time to leave the small rod at home, even when there are smaller fish present, is during summer when water temperatures get high. The prolonged fight of a lighter rod and even lighter tippet when the temperatures are high means dead fish. Now let's look closer at the whole small rod for small fish concept. What happens when you are using a 6-weight for 5-pound tarpon and a 20-pound snook comes out from beneath the mangroves and grabs the fly? I feel it's a safe bet that we would all prefer to have a 9- or 10-weight in our hands when that happens.

Another way to downsize your tackle is to go with either lighter leaders and/or smaller flies. Going this route can sometimes mean the difference in numerous eats from fish throughout the day to none. Over the years I have witnessed countless times that downsizing from a #2 fly to a #6, or even a #8 is the difference between catching a redfish or not. This scenario of course comes with its own set of problems. Number one, going to a much smaller fly usually requires going to a much smaller tippet. And, this of course means more lost fish. Whether you are talking broken tippet on the hookset or during a prolonged fight, or having a smaller hook opening up. It sometimes even means missing hooksets altogether because the smaller hook did not find the magic place in the fish's mouth to find purchase and hold.

All the other little things

Now that we have covered the most important aspect of going small, which is the tackle used to catching the fish, let's concentrate on all of the other stuff that plays a factor in not only the success in fishing that we seek, but also in the enjoyment in going fishing.

I have always be a proponent of using a smaller skiff whenever appropriate. It saves on fuel and in some cases allows me to access remote waters that are holding fish when others are not. Also, while I am not a fan of kayaks or stand-up-paddle (SUP) boards, I have not sworn off paddling altogether (more on this another time). I do in fact see the merits in accessing the shallows from them. But, like everything else, going small, especially when talking boats, comes with many inherent problems.

First and foremost, smaller skiffs can be dangerous, especially for individuals who are less than proficient mariners. The main reason for this is of course weather. None of us, and that includes the weatherman, can truly know exactly what curveball Mother Nature will throw at us from day to day. I saw it plenty from back in my Coast Guard days when conditions were forecasted to be perfect and before you knew it, we were pitching around in 8-foot seas and 30-knot winds trying to locate a capsized vessel. With that said, I would also say that I am about as experienced as they come with a very conservative estimate of 3500-4000 days on the water between the CG and my days guiding. And, on more than one occasion, I have gotten caught out in my little boat and then found myself falling to my knees and kissing the ground when we finally made it in. The point being, if you are going to go small, know not only the boat's limitations, but also your own.

There is another dangerous aspect of a smaller boat to consider, especially when operating in shallow water. Many small boats are run with a tiller rather than a helm. I have heard of, and in fact witnessed, numerous cases of both operators and passengers being thrown from their skiffs when striking submerged objects. Also, a tiller is a direct link to your engine and when that tiller moves, the engine does. Compared to a helm, there is no turning ratio between you and the motor. The point is, if you make a sudden overcorrection in steering at the exact wrong moment, this can potentially send people over the gunnel. Sure, a small skiff can be great to fish from but, getting to and from the fishing grounds can be dangerous and I cannot emphasize this enough- Wear Your Kill Switch!

So this next part of downsizing could be considered either a pro or a con. Whether you are downsizing to a smaller skiff or getting a smaller skiff as a second boat you need, and BTW, this my favorite part- NEW GEAR! A smaller skiff means less room and you of course are not going to want to weigh down your little skiff, it defeats the purpose, right? So that means you have to go shopping for a smaller ice chest, a smaller gear bag, a smaller first aid kit, etc. If you are anything like me, and I suspect the majority of you are, this is definitely a pro. However, if you have a spouse who is more worried about having a roof over the family's head and putting the kids through college, it might be considered a con.

Until next month. Be good and stuff like that!