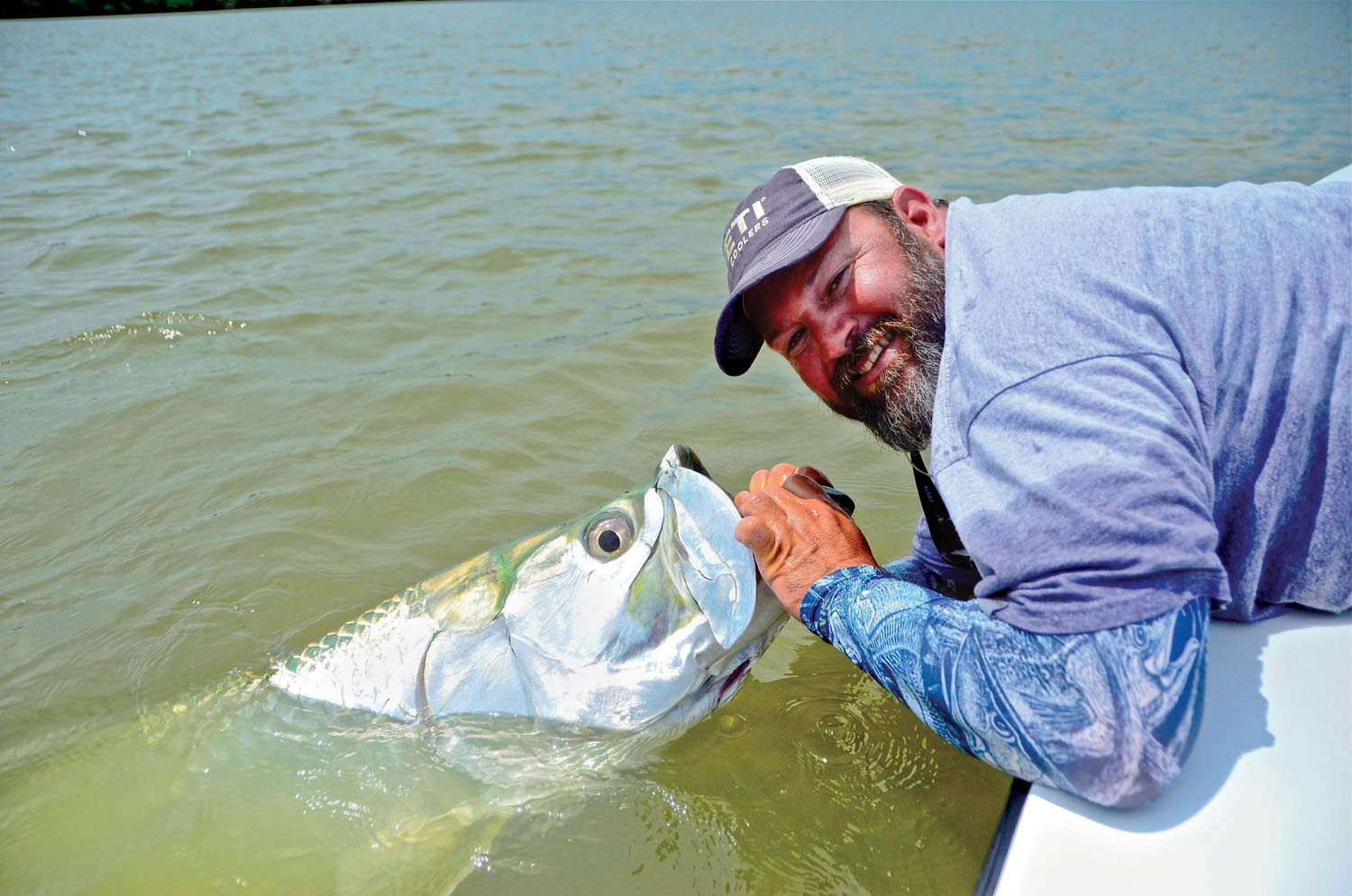 The battle is won, time for high-fives!

A major benefit of being a fishing guide twenty-plus years is having witnessed many epic fish battles. Customers and friends – incredible victories and heartbreaking defeats – pursuing mighty denizens of our oceans and estuaries.

Fist-bumps and high-fives, whooping and hollering, tears and even injuries – I have seen them all.

Successes and failures have come from anglers knowing or not knowing how to fight a big fish. In some cases, it boiled down to pure old-fashioned good or bad luck. However, there is an old saying about making your own luck. By that I mean, go fishing more often so that you increase your encounters with big fish and learn how to fight them hard.

Let’s say you have made the perfect cast and get a solid hookset. The first and most important thing you need to know about fighting a big fish is that you need to break its spirit early in the fight. To accomplish this you must start with a great fly reel that has a great drag.

I recommend only reels with a well-maintained, center-pull, cork drag such as those by Tibor or Able. I have seen too many drag failures in the more “modern” designs. Just as important, the drag must be set properly. I like about seven pounds of resistance for tippet in 16- to 25-class. You can use a Boga Grip to get an idea what seven pounds feels like – you will have a hard time pulling line from your reel.

Once the fish is on the reel and pulling hard against the drag, you will then have to apply additional pressure by palming the spool. To do this properly and safely, you should marry your thumb to your hand and reach beneath and around your reel until your fingers to reach the drag knob. Once there, start to bend your hand around until the ball of your palm starts to lightly touch the spinning spool. The most important thing is to keep your thumb away from the spinning reel handle. I have seen thumbnails torn loose, broken thumbs and, even worse, broken-off fish.

If you are fighting a fish that jumps, you have to know when to give a little. I am sure you have all heard the term, “Bowing to the king.” The king in reference here is the Silver King – AKA tarpon. Well-deserved respect for sure, however the concept of bowing and giving slack to a tarpon also applies to any large fish over say 30- to 40-pounds, that jumps during a fight.

The purpose of bowing is to prevent a hefty fish falling back onto a tight line and breaking it. It also helps prevent the hook from working loose in a hard-mouthed species such as tarpon or billfish.

Which brings me to another point: Learn to recover line as quick as possible WITHOUT SHAKING THE ROD. This is one of the biggest mistakes I see in all fish fights with a fly rod. Almost nothing will work a hook free of a fish’s mouth quicker.

Now, let’s talk about the rod. The thing that people who fish only for stream trout or back-bay reds and trout do not realize is that the tip and mid-section are really only there for casting and protecting lighter tippet when fishing for smaller fish. In regard to heavier rods for bigger fish, the tip is only for the cast. As for the mid-section, it is also a big part of the casting apparatus, however, it also provides the perfect buffer for the tippet when a fish makes long, hard runs. In regard to fighting a big fish hard, it’s all about the butt-section. This is where the real power lies.

You make the perfect cast and strip-strike. The fish flounders and you continue to strip to keep the line as tight as possible, with the rod at about a 45⁰ angle. The fish shakes its head and explodes out of the water. Keeping the line pinned against the rod handle and the line in your line hand, bow to the leaping fish by bending your knees while leaning out and reaching your rod toward the fish.

The fish re-enters the water and starts to run. You clear the line off the deck and your properly set drag starts to sing. Apply additional pressure by palming the reel. While the fish is running, you keep the rod at that same 45⁰ angle. The fish jumps again and you bow again.

The fish has slowed and it is time to recover line. You reel the line down to about 15⁰ degrees (without shaking the rod) and smoothly pull upward until you reach about 70⁰ and then reel down again. Repeat as necessary.

As the fish gets closer you begin using your legs to pull. That’s right. Use your strongest muscles of your body to fight a big fish, especially when the fight starts to go more vertical.

As you reel to the fish, begin bending your knees and then lifting with your legs rather than your arms. Once the leader inside the rod-tip and the fish is boatside, you may consider backing off the drag a bit as your guide and/or buddy tries to leader the fish.

Now it gets tricky. You must “hold” the fish by palming the reel, being instantly ready to release the pressure of your palm, should the fish decide to make sudden run. The purpose of this is to protect the leader should the fish still be green.

Lastly, you never want to bring the rod to 90⁰ until the final moments of the fight, dropping the rod to the side and bringing the leader into the hands of whoever is performing leader duties. Remain intensely alert and anticipate all manner of things that might go wrong.

Remember – The most important thing in fighting a big fish is to break its spirit quickly by applying maximum pressure and pushing your tackle and body to 100%. By doing so you greatly increase the fish’s chance to survive and fight another day.

I hope these tips shortened your learning curve. Best of tides!