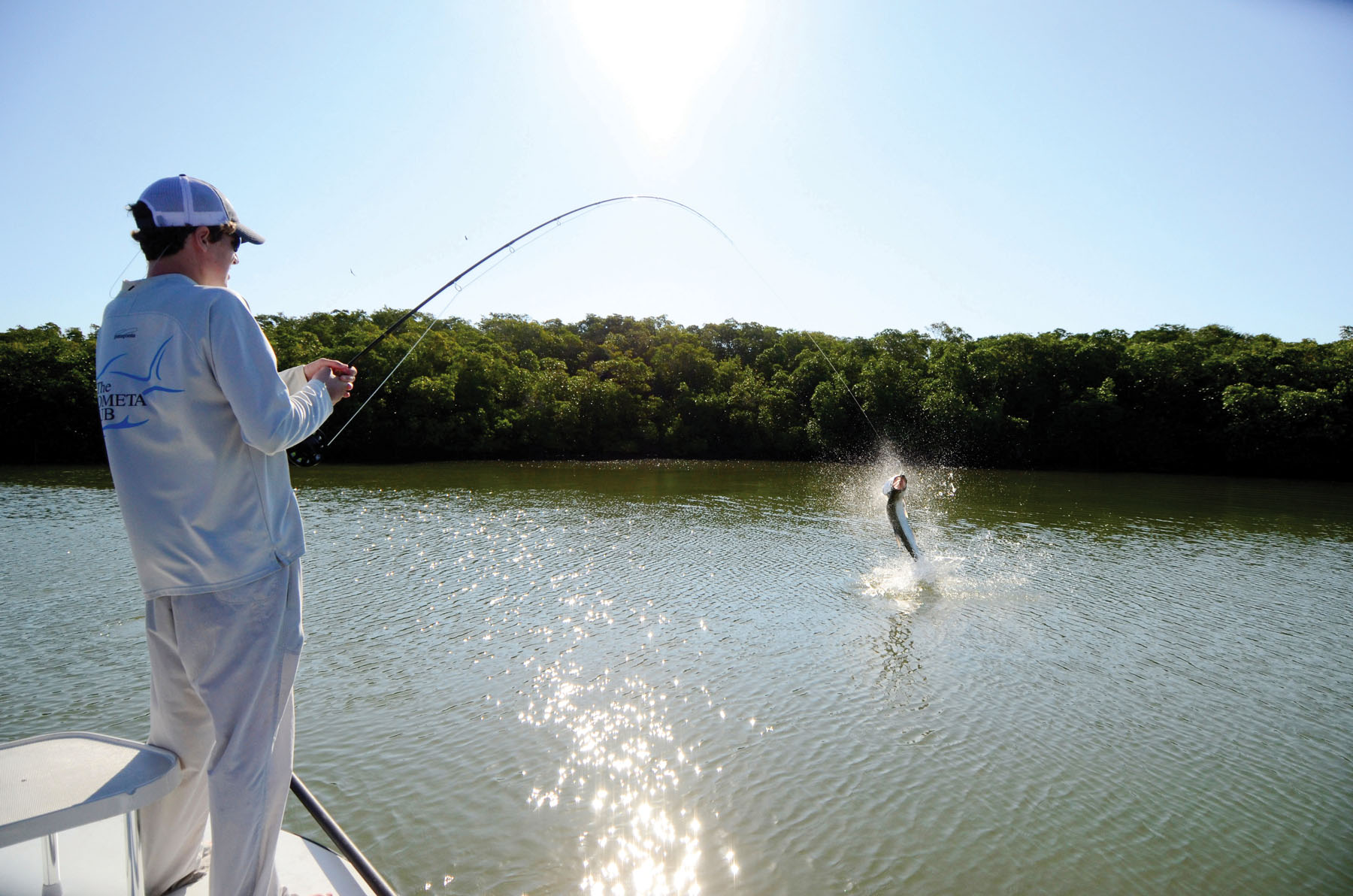 Knox Kronenberg fighting his first tarpon on fly.
The higher tides had flooded so deep into the grass that the line between land and water had become blurry. I was stressed because the higher waters had been yielding very few shots in the previous days and I had a good customer bringing his youngest son down to try to catch his first redfish on fly. As we poled down the sand flat we noticed a crash deep in the flooded saltwort and as we closed the distance noticed three reds crawling though the maze of tangled succulent. The cast was perfect and the then 12 year-old Jaxon Kronenberg was hooked up to his first fly caught redfish. What makes this story even better is that a couple of weeks earlier I had guided his 15 year-old brother, Knox, to his first tarpon on fly.

As the years have progressed I have definitely begun to see a pattern of young and upcoming fly casters who were introduced to the sport at a young age and who have become nothing short of fantastic anglers. This got me to thinkingis youth truly the key to becoming a good fly fisherman? I will submit this; it does not hurt but no, youth is not a prerequisite to becoming a good fly fisherman. All that is truly required is dedication.

Just the other day I was in the driveway washing the skiff after a long day on the water and a neighbor walked up and started asking questions. I told him that we had had a tough day but had done well the day before. He then began to tell me about watching people catch bonefish with a fly rod on television and that he really wanted to learn how to do it. He then asked me if I could teach him. I had to think about it a second and then responded, "That is up to you."

He of course asked me what I meant and I went on to explain, "I have a lot of people who step onto my boat wanting to catch a fish on a fly rod but, very few of them know how to fly fish." I went on to add, "I can certainly show you the basics but in order to get good you will have to take it seriously and dedicate yourself to getting good." I haven't heard back from him yet.

So with that said, I thought I would share with you my thoughts on what it takes to "learn the sport of fly fishing".

The first step is to take your conventional tackle and lock it in a closet. Give the key to a trusted friend for at least a year. From there it is time to clear your mind of pretty near everything you think you know about fishing and start with a clean slate.

Moving on it is time to get you your first fly rod and a quality instructor. In regards to the rod, I would personally stay away from the more expensive rods as they tend to be (but not always), very fast action rods and lack the "feel" for the beginning caster. I think that is important for the beginning angler to be able to feel the rod load. As for an instructor, these names pop immediately into my mind as being the best of the best at not only casting but as instructors- Dave Hayward, Carey Marcus, Joe Robinson and Andy Packmore. Hayward works at the fly shop in Rockport and Packmore is at FTU in Houston. I do not know if you can track down Marcus or Robinson however, they are some of the best teachers out there and I promise you it would be worth the effort if you could get them. Much to my detriment, I taught myself to fly cast but it was Hayward that helped me get the bugs out and refine my technique.

Once you find an instructor, ask them to not only teach you to cast a loop but also to strip the fly. I have had a great number of beginners show up on the boat that could throw a decent loop and could drop the fly next to a fish, only to have no clue what to do once the fly hits the water. I would also suggest, in the beginning, do not worry about trying to cast 60 or 70 feet. Learn to cast well at 30-40 feet and you will catch more fish.

Now that all of the easy stuff is done let us talk about the hardest part of learning to fly fish and that is taking the time to learn all that you can, practice, and then apply what you have learned. Remember, we live in the world of information. Instruction articles and videos can be found all over the internet and for most of us, on our smart phones. Truth be known, I guess it is why younger anglers become great anglers. They have less to forget and more time to practice what they have learned.

When I was in the Coast Guard years ago and getting qualified to become a boarding officer, our law enforcement instructors would tell us over and over that it requires thousands upon thousands of repetitions to commit an action to muscle memory. After years of fly fishing experience and seeing hundreds of fishermen cast to fish from the bow of my boat, I can tell you that this statement is as big a truth in life as any. The ones that practice are the ones that get good.