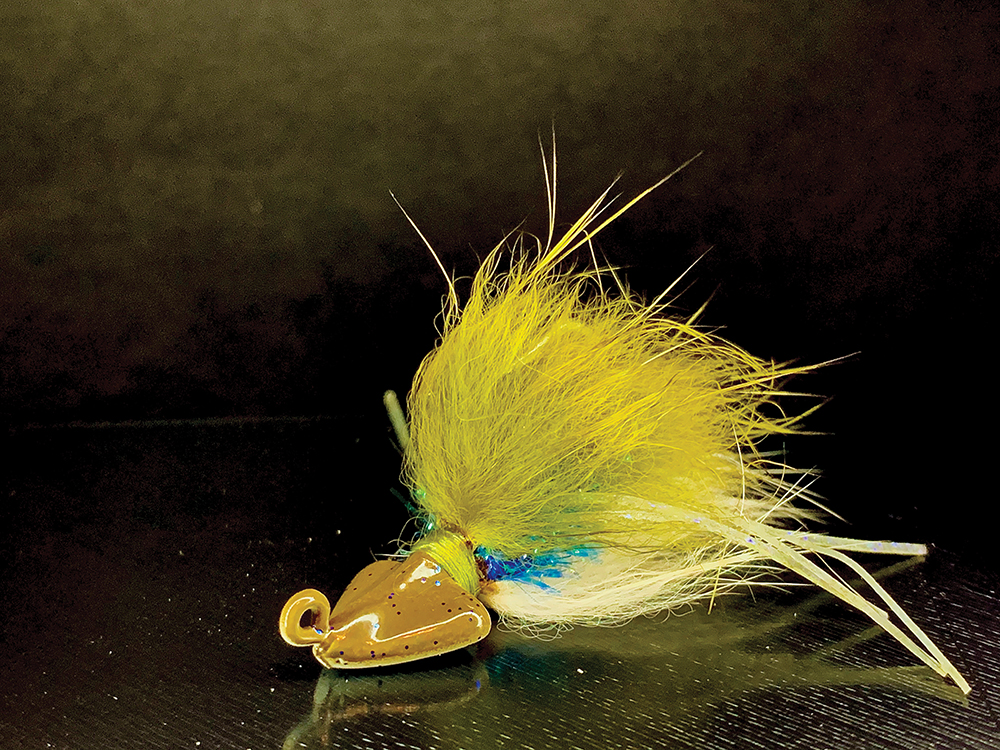 Buggs Jig was the original concept for my Convict Killer.

I have a love-hate relationship with sheepshead. In fly fishing circles they're jokingly called "Texas permit." This is fitting since I feel similarly about tropical permit. Both species will eagerly take a look at your fly, giving you a rush of adrenaline, just prior to fleeing as though insulted. As willingly as they'll take live or dead bait, it seems odd they'd be so difficult on artificial.

I will never claim to have sheepshead wired and I would cast serious doubt upon anyone who claims otherwise. These fish are just too weird to allow total confidence. I have, however, learned quite a bit about what sometimes works and what never does. If you've read this column for any length of time you know that I'm addicted to sight-casting. I'm generally chasing redfish, but I have no aversion to dropping a cast in front of anything that might eat.

Throughout the first few years of owning a poling skiff I threw flies to literally hundreds of sheepshead. I did the textbook things. I used the suggested flies, threw way ahead of them and resisted moving the fly more than just a wiggle. Fish after fish would approach and then flee for no apparent reason. Then one day I was casting a spoon-fly to redfish when I spotted a huge sheepie tailing on oysters. What the hell. The bright shiny spoon-fly is the furthest thing from the typically suggested drab sheepshead flies as you can get. The wind did what it usually does to a spoon-fly and sailed it several feet off target. To top it off, it splatted down way too hard. I cringed at my pitiful presentation. But the crazy fish rushed straight to it and snatched the spoon on the run. Go figure.

After that encounter I threw that same spoon to dozens of sheepshead, all of whom fled in terror. Then one day while scouting I spied a nice big sheepshead nosing into the marsh grass. I tossed my Buggs jig in front of the beast and he instantly inhaled it. Hmmm. That afternoon the olive colored Buggs accounted for several more with better than 50% success ratio.

For those that don't know, a Buggs jig is a lead head jig tied with rabbit fur the same as you would a fly. The jig "breathes" in the water with even the slightest movement. I'd throw it in the path of the sheepshead just close enough to get his attention and then let it sit on bottom until he found it. As he approached I'd give it the smallest movement possible by just wiggling the rod tip and bam. Fish On.

This gave me an idea. A fly tied like a Buggs that was originally tied like a fly. Full circle; the Convict Killer was born. I'm sure this fly is nothing new and somewhere there's an identical fly with a prettier name, meant for more glamorous species. Regardless, I tied up a few and went to try them out. I'd like to say they were gobbled up by every fish in the marsh. Alas, sheepies are still sheepies and never fully cooperative. But at least I upped my batting average to a respectable number.

The fly is dead simple to tie. Start with a small, sharp hook. I'll use a #8 or maybe a #6 depending on the brand. Sheepshead have a relatively small mouth that is hard as a rock and difficult to set a hook into. Smaller hooks seem to work better; make sure it’s super-sharp.

I use a small or extra-small lead dumbbell near the eye of the hook. Secure it with a few extra thread wraps and some super glue. Next cut a short strip of olive rabbit strip with black barring, about an inch and a quarter long. Poke the hook point through from the underside of the hide about an eighth inch from the end. Slide it to the start of the bend and secure with several thread wraps.

Now tie in a strip of olive cross-cut rabbit over the base of the tail strip. Make sure the fur is lying toward the rear of the fly. At this point I'll put a very light bit of glue on the base thread to help hold the rabbit strip. I don't know that it's needed, but my flies never come apart so I keep doing it.

Carefully wrap forward slightly overlapping until you reach the weighted dumbbell. A few wraps to secure it and then snip off the excess. Continue with several more wraps to fully secure the tag end of the cross-cut rabbit, pass over the dumbbell and then whip-finish at the hook eye. A little head cement and you're done. I can easily knock out a dozen in half an hour.

Having this fly tied on isn't a magic elixir, they're still spastic little boogers with unpredictable personalities. With time and experience I've learned to read sheepshead a little better. Some will be found tailing over structure similar to reds, others will be cruising the flats and the ones in the marsh will often be found nosing along edges of salt grass. They can be single or in loose schools.

I have had the least success on the larger schools on open flats. Love a school of reds, but with sheepies it usually ends with one spooked fish zigzagging through the rest of them and a suddenly empty flat. When taking a shot at a roving school you can try throwing way out front of the lead fish and then waiting patiently for them to mosey over. Once they're close enough, give a couple little twitches to get their attention and let it sit again. If you get a positive response, give it the slightest little movement by stripping maybe an inch or just wiggle the rod tip. At this point they'll either crush it to the bottom or change zip codes.

Single tailers over structure are somewhat easier. Since their heads are buried and they're preoccupied you'll need to get the cast in a little closer. How close is the million dollar question. I'll start by dropping in a couple feet away, but in the direction I feel they're headed. If they're stuck on one spot I'll make each follow-up cast a little closer hoping they'll hear the splat. Eventually they'll either come investigate or spook. If they turn on the fly, follow the same procedure as above.

Big singles in the marsh grass are the highest percentage shot in my book.  I have worked out a technique that pays off more often than anything else I’ve tried. These fish are usually keyed up and feeding so they'll be more aggressive. While those on the flats are rooting around for crabs and such, marsh fish nosing into the grass are likely hunting shrimp. Given that, I like to land the fly fairly close and tight to the shoreline. If they hear the splat they'll turn quickly. If they don't respond, hit it a little closer until they do. This is where it gets interesting.

Once you know he saw the fly and has shown some interest, quickly pull it away with a backcast. An aggressive sheepie will start frantically searching for the disappearing shrimp. Immediately splat the fly right back on him. This often results in a solid strike that would make a redfish proud…or he freaks out and you never see him again.
As I said earlier, I don't pretend to have them figured out, but if you'll dedicate some time to pursuing them you'll eventually be rewarded. Now if only I could get lucky on a permit.