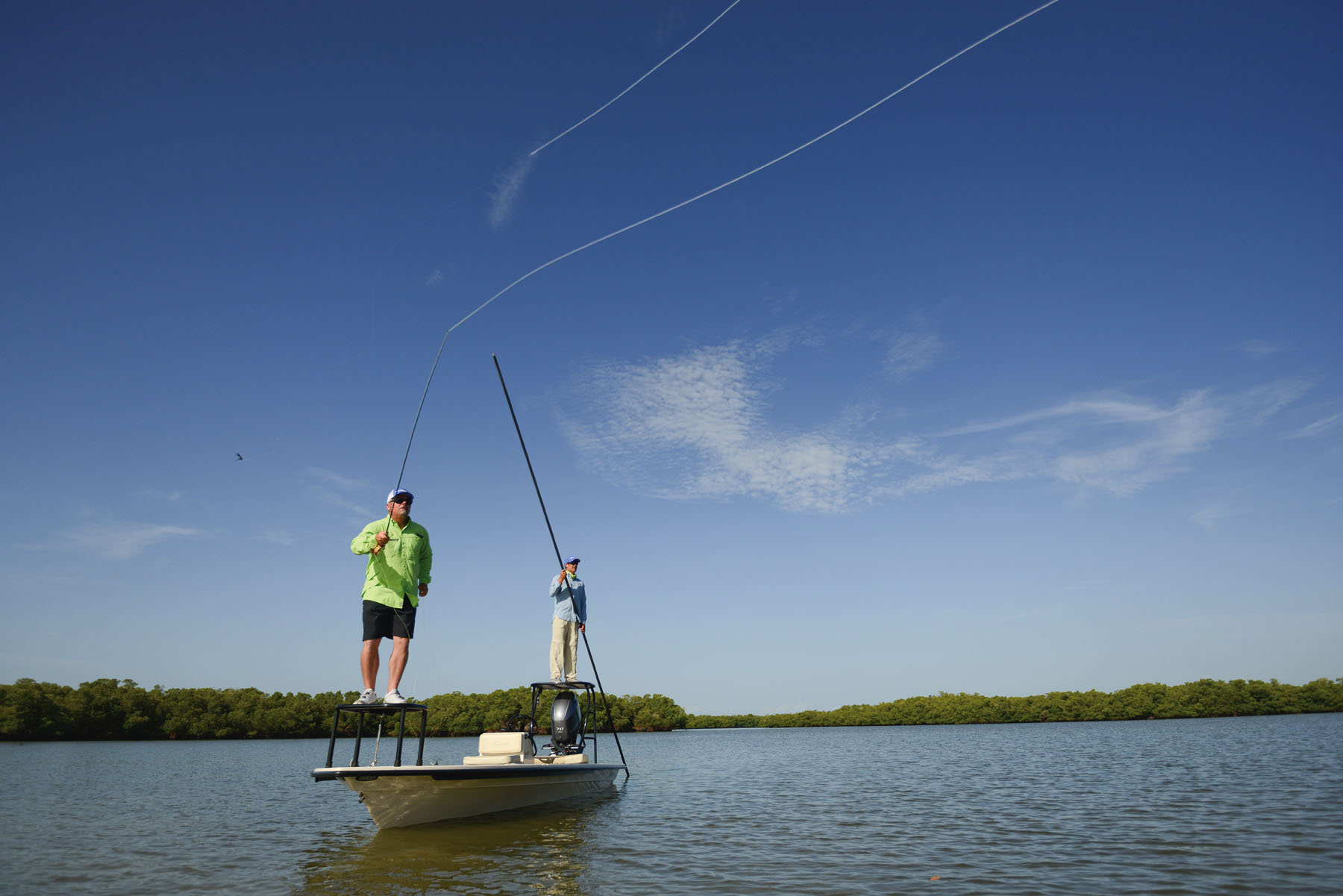 "What is the perfect boat for fly-fishing the Texas coast?"

Over the years I have run a variety of boats that have all been outfitted and rigged for fly-fishing. From my 14' jonboat to a 20' Haynie H2O to my first technical poling skiff in '98 which was a 16' Whipray, every choice I have made has been about catching fish on fly. But, it was the Whipray that changed my whole thought process in regards to the type of boat I needed.

Back then you see, like most Texans, I believed that running shallow was the key to catching fish. I have never been more wrong in my life. One week spent in the light-weight skiff with no tunnel, quietly poling into and out of the shallowest of waters, changed my mind immediately. This was it!

Since that first 16' skiff, I have had several versions of technical poling skiffs that have included three 18' Watermans, a Glades Skiff and two Ambushes. Oh yeah, let's not forget the two pangas. All these boats have been great and have served me well, however, none of them have even come close to the perfect boathence the reason for me keeping at least two boats nearly all the time. Currently I am running Ambush hull #1 which was the original prototype of that hull and I have a 22' panga. I love them both for what they are intended but, like the winds and tide, things change.

I currently find myself spending more time making longer runs and, like my customers, I am finding comfort increasingly important. In addition, I put a lot more stock in the overall performance of the hull. Used to, it was only about the fishing. It did not matter how dry or fast the boat was as long as it fished well when I got to where I wanted to be. And, I used to think that you could not have both. It was either comfort and performance or a great fishing machine. As my search continues for the perfect boat(s) for my needs, I routinely consider all the things I have liked in my previous boats and all the things I have found appealing in others that I have fished from over the years. With that being said, I will share with you what I have learned.

So what do I look for in a Texas fly-fishing skiff?

I guess the most important thing I have learned over the years is that the hull is everything. The shape and dimensions of the bottom of the boat determines everything from speed, ride quality, draft and in some cases, how wet or dry a ride it will deliver. For fishing in Texas, in most instances you want a boat with zero deadrise or crown in the hull at the transom. Providing the hull is built light, the flat-bottomed boat will give you the shallowest poling draft. And, while most flat-bottoms tend to be a rougher ride, this can be countered by having a sharp stem and entry that extends to at least half the boat's length. Also, the flatter the bottom of the boat, the less horsepower it needs to push it along at an adequate speed.

In addition to the above, it is important that the hull be quiet. Fully-cored (part of the construction process) hulls tend to be quieter but most importantly, you do not want a hull that is concave or flared near the waterline at the bow. Another thing to avoid are spray-rails or style-lines that are too close to the waterline. When it is calm they are no big deal, however, if you get in a chop directly abeam or at any other undesirable angle, wavelets can hit the under-surfaces of these features causing noise that will spook fish.

Now let me give you the two things that I do not want on any skiff that I intend to fish from. The first is a key-slot or recessed transom. In my opinion the recessed transom hinders your ability to trim or "fly" the bow when making a rough bay crossing and even worse, it affects how a skiff will spin or turn when being poled and this reduces its fish-ability. Oh, I should also mention that it makes a hull very noisy when staking or anchoring from the stern.

Next on my list of things to avoid would be a tunnel. Tunnels reduce planing efficiency which slows the boat quite a bit, they rob fuel economy and potentially increase draft by reducing the displacement of the hull. I have not run a tunnel in about six years and have not had a single day when I felt having one might have improved my efforts.

Moving on after hull selection is finalized, everything else is easy. For me, the cleaner and simpler the deck and cockpit layouts are kept the better. I want hatches that do not flex or creak underfoot and I want to eliminate anything above deck that can snag a fly-line. As for trolling motors, I think having one is a great idea so long as it can be easily removed and nothing remains to snag a fly line. I personally have been very happy with Minn Kota's quick release system that leaves nothing but a small polymer puck on the deck once the motor is removed.

As of right now, I am currently debating which will be my new skiffeither a Maverick HPX-S or the Maverick HPX-18-V. I have recently fished both and love both hulls for all they have to offer. The S is one of the finest performing poling skiffs I have ever been in and is a smooth, dry ride in comparison to others I have owned. It addition, it floats as shallow if not shallower than any other skiff in its class and is mighty quick with the 70 Yamaha 4-stroke. However, I'm really starting to dig the idea of getting into a "bigger" skiff (HPX-18-V) that has some deadrise and is a bit heavier providing a much more comfortable ride than anything else that I have owned. Outside of the fact that it poles extremely well for its size, it is a very fast hull. The only drawback to the 18 is it is in fact much heavier than any of my previous skiffs and of course drafts a bit deeper. No matter what, it is going to be interesting seeing what may happen should I choose to go this route.