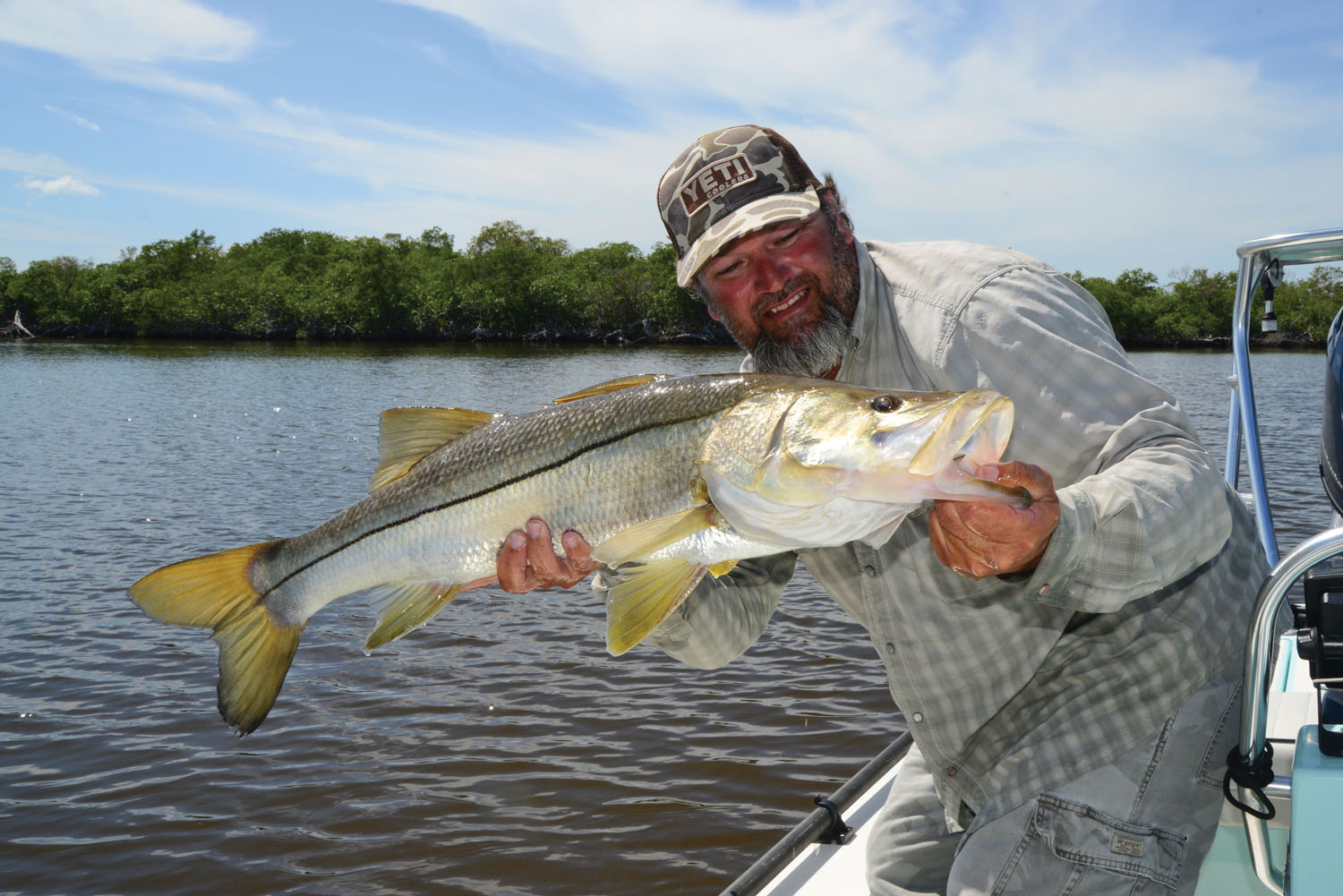 So Last month I shared my thoughts on how important the connection between your fly line and leader is but, there are so many other things that come into play when trying to stay connected to a fish of a lifetime. From all of the other knots that you might tie down to maintaining your equipment for peak performance. All these little things are part of the formula necessary for success.

Just yesterday I was guiding a friend, Justin Thomson, who had booked a few days with me over here in the 'glades with high hopes of getting him his first snook on fly. While poling down and blind-casting a favorite shoreline, I spotted a good snook. I told him to strip in fast and give me a forty-foot cast to the 8 o'clock position. His cast landed about five feet behind the fish. "NO, NO–pick it up and move it ten foot to the left," I told him with urgency. "I don't see it," was the reply. "You have to trust me," I said. "Ten foot to the left! Hurry!"

Well the cast was a little long and the fish was now swimming and was going to pass under the leader. "STRIP FAST, STRIP, STRIP!" And wham, the fish exploded on the fly and hit it on the run heading away and down a bank that was littered with treacherous stumps and logs. "Palm the reel, you have to stop her!" I yelled. Well he put the heat on the fish and was able to turn it away from the bank. I was so relieved when the 11 pound beauty came to my hand.

So let us take a look at the complete connection between you and the fish. We will start at the reel and move down to the fly.

The first connection is going to be between your backing and fly line and it is a loop-to-loop connection. Now I know that I said in last month's column that I do not like a loop-to-loop connection but, it is necessary when connecting the backing to the fly line. And, it is one that will allow you to easily change out your fly line if one gets damaged. This is another connection that I have adamant opinion about. First a Bimini knot should be tied into the backing and then a loop should be served in the end of the fly line utilizing either Kevlar thread or GSN (gel spun nylon). Another way to create a strong loop at the end of the fly line is to use at least three small nail knots about a half-inch apart. Again I will say, if there is a welded loop at the end of your fly line, cut it off and create your own loop. I also recommend using some Zap-a-Gap (a waterproof super glue-like product) on the thread or nail knots. It is very important that this loop does not come undone. If you hook into a hard-running fish and there is a snag at this connection you will loose a rod guide or three. Again- this is a critical connection that must pass through the guides smoothly.

The next connection is between the fly line and butt-section of your leader. As I preached last month, this should be a nail knot tied onto a doubled-up fly line. From there you move down your leader. Now, I am not going to get into the formula for building a leader; however I will say, I rarely utilize a premade, off-the-shelf, knotless leader. I believe in building my leaders because I can change the taper for throwing different sizes flies. However I will say this, a blood knot should be used when stepping down when tying knots in lines of similar diameters. For example when going from 40 to 30 or 30 to 20 or even 20-15 pound the blood knot is the way to go. When it comes to joining two lines of dissimilar diameters such as joining a 60 or 80 pound bite-tippet to say 15 or 20 pound tippet, well this is the most complicated of all connections, in my opinion. And, when not tied correctly, one of the biggest culprits when it comes to lost fish.

When making the connection between the bite-tippet and tippet, I utilize one of three knots- the Huffnagle Knot, an Albright knot or an improved blood knot. As for which to use, I would say whichever one you can tie best. I say this because it does not matter which knot you tie if it is not tied properly.

So let me touch on the concept of "properly" tied knots. There are numerous things to consider. The first being that it is important that a knot seats or pulls together properly. If it does not, there can be slippage when fighting a big fish. When this occurs, friction caused by extreme pressure can cause a failure. To get a knot to seat properly there are two things that must be done. The first is very obvious- the knot must be tied correctly. Next, it important to moisten the knot before cinching it down. By moistening, I mean, put the knot in your mouth and generously apply saliva to prevent friction when you cinch down the knot and allow it to seat completely. The next thing to consider is that it is not only important to be careful choosing which knot to use when connecting lines of dissimilar diameters, but also when connecting lines of dissimilar brands. Some lines are softer than others so, if you connect a soft mono with a hard fluorocarbon the fluorocarbon might cut into the mono, thus causing a failure.

One last time, knots are important when it comes to fly fishing. I simply cannot overemphasize this. However, there is a lot more to it than that. Your rod guides must be free of burrs or rust to prevent the backing from fraying while in a prolonged fight with a big fish. In the same vein, your multi-piece rods must be put together tightly and aligned properly. Don't believe me? Just check out the image of the tarpon leaping with the upper section of the rod flopping around. This is another top culprit in the cause of lost fish and another reason (see part one of this two-part column) to use the guide's tackle.

The last piece of the whole "staying connected" equation is the drag on your reel. I say this last bit with great conviction, even though very few exist anymore avoid buying a reel with a caliper-disc drag. You want a center-pull drag made of cork or a drum drag. Also, despite what advertisement says, do not buy into the concept of a composite drag. A cork drag is the only way to go when going center-pull. As far as drum drags, well the only company I can think of that makes a drum drag is Tibor in their Tibor Light series and I have been pleased with my Tibor Light Backcountry reels for the last 10-12 years. In fact, most of the big snook and 40-pound tarpon we have landed in the last week have been on an eight-year-old Tibor Backcountry. The last bit of info I have to share in regards to reel drags is–while I feel a center-pull cork drag and a drum drag are best, neither are worth a damn without two things. First the drags must be properly lubricated (as well as any bearings) and second, the drag must be "backed off" when the reel is not in use. One of the worst things you can do to a reel is to leave the drag compressed when not in use.

All in and all done I cannot express enough the importance of having a great connection between you and the fish. Sure, you might be casting to a fish that is just a fish one second, but, the next fish you see might be the fish you always dreamed of. When that happens you want to be certain that everything is perfect.

Until next month... be gude and stuff like that.