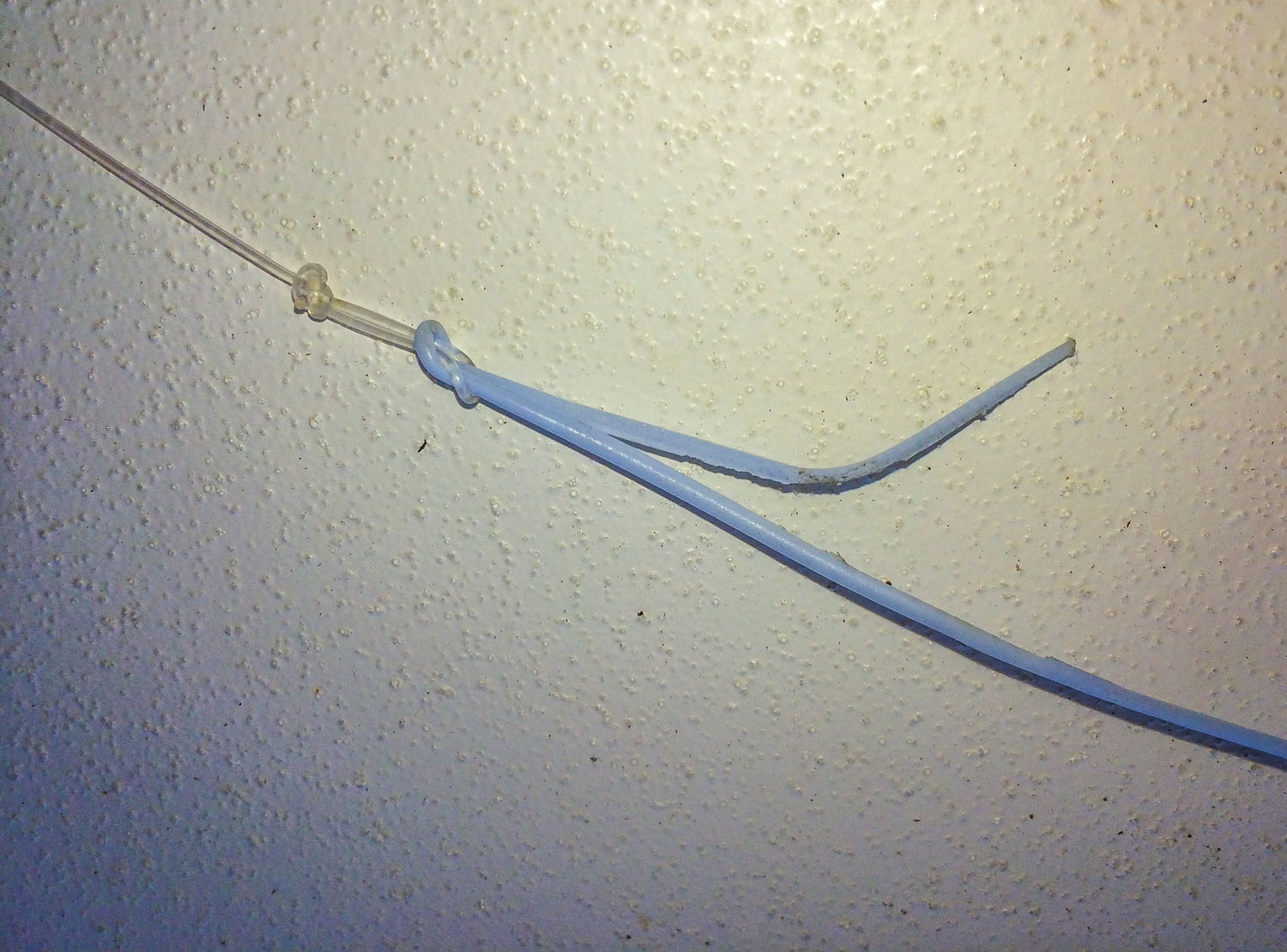 Welded loop failure! This is why we learn to tie the nail knot.

It is hard to ask an individual that spent hundreds if not thousands on a great fly rod and reel to leave it at home but, personally, as a guide, I would prefer that everybody that came down to fish with me would just leave their tackle and use mine.

The reason for this is actually twofold. First, it irks me watching people every time they step up or down from the bow, spending time reeling up line and stowing their rod, while their buddy does the same in reverse with a few practice casts added to the process of getting ready and situated. It would be much simpler if the angler stepping down simply handed the already working rod to the one stepping up. We would enjoy a lot more productive fishing time during the charter instead of messing around retrieving and replacing rods from under-gunnel storage. But, as my good customer and friend, Frank Wimbish, would say, "I digress...

The second and even more important reason for wanting people to use my gear arises from my biggest pet peeve: improperly tied knots. Especially when knot failures result in the loss of a lifetime fish. Over the years I've seen innumerable fish lost due to bad knot-tying at both ends of the fly line, meaning leader knots and also backing knots.

Probably one of the biggest mistakes I see comes from laziness on the part of the angler or the fly shop that rigged their tackle. The mistake I speak of is the use of loop-to-loop connections to attach the leader to the fly line. Now, I am not only going to express my opinion here, but also the opinion of numerous guides and anglers I hold in high regard: There is only one way to connect the butt-section of a leader to a fly line, and it's called a nail knot!

So, maybe this is the fly fishing snob in me coming out but hey, we are fly fishermen because we seek to rise to a greater challenge. Most of us took up fly fishing because we were growing bored with conventional angling, and part of rising to the challenge includes developing skill to rig tackle properly. To accomplish this you must master knot tying.

Before going further I need to explain the reason I elected not to include knot-tying drawings in this article. Foremost is because my drawings suck and second because Google is your friend. You can easily find dozens of excellent knot-tying videos on the internet. Moving on...

Let's get into the nail knot. Again, shared opinion: The nail knot is the only way to connect the butt section of a leader to a fly line. Yet for whatever reason, too many anglers refuse to master and utilize this powerful connection. I suspect it's just too easy to pull a $10 knotless leader from a package, throw a perfection loop in it, and then loop it to a prefabricated "welded" loop in the fly line.

About these so-called "welded" loops – they may be a great time saver but I probably see at least a half-dozen failures during a year of fishing charters, many of which occur while fighting large or trophy-class fish. This is heartbreaking to both angler and guide and totally unacceptable in my opinion.

Or maybe an anglers goes to the fly shop and the person behind the counter nail-knots a short piece of line to the fly line and then throws a perfection loop into the "short-butt"and here we go loop-to-loop, again.

As for the perfection-to-perfection method, let's just say this method causes major issues for not only less-experienced casters who throw numerous tailing loops throughout the day, but also for the more skilled who have the ability to throw very tight and narrow loops. The problem occurs when the double perfection connection travels too near the fly line and becomes entangled. This event does not allow the leader to deliver the fly properly and results in a botched cast. This can cost you a fish just as easily as a welded loop coming undone.

And yet there is still another reason that the nail knot is so important. I see it day in and day out, even with experienced anglers. It is the dislike or flat refusal to reel the leader through the rod tip.

Folks, it is necessary to bring that leader into the guides to land large fish, especially tarpon and billfish. Shortening the line and pulling with the butt of the rod is a necessary evil, even when close to the boat. To accomplish this you MUST know how to tie knots that will pass thru the guides without ripping them off of the rod. And, it just so happens- the nail knot is one of those knots.

So, at this point, I may or may not have convinced you how important the nail knot is. But let us just say, for grins and giggles, that I have and you are ready to learn to tie it.

There are four tools available. The first is a nail. Who'd've thunk it? The second would be a small soda straw, followed by the tube of a fountain pen. Last but 'knot' least (pun intended) would be a NAIL KNOT TOOL.

Yep, some genius figured out the simplest way to tie a nail knot. Hell, if my dog had opposed thumbs he could tie one. In short, I suggest heading to the fly shop and getting one.

But here is the kicker, in order to make the connection that I recommend- you need to purchase the largest nail knot tool available for reasons I am about to explain.

Remember, we saltwater anglers may catch the occasional "rat" red but one thing is certain when fly fishing in saltwater: you never know what you may be casting to when you choose which rod to throw.

Case in point, I was fishing with an 8-weight earlier today for snook and redfish when we came upon a laid-up tarpon between 40-50 pounds. It was my first shot at a tarpon this year and, I am ashamed to admit this but, my knees were a little shaky and I blew the cast. But, if I hadn't, and the fish had eaten the fly, my knots would have been put to a severe test.

When tying a nail knot for what I would term "more powerful" fish, I recommend doubling the fly line. To do this with a nail knot tool requires the largest they make. Smaller tools always seem to get too tight with doubled fly line and larger butt sections of leaders being crammed through them.

Again, I urge you to go to do a little "fishing when you can't" and explore some of the videos available on fly line rigging and making good connections between your fly line and leader.

Until next month... be gude and stuff like that.