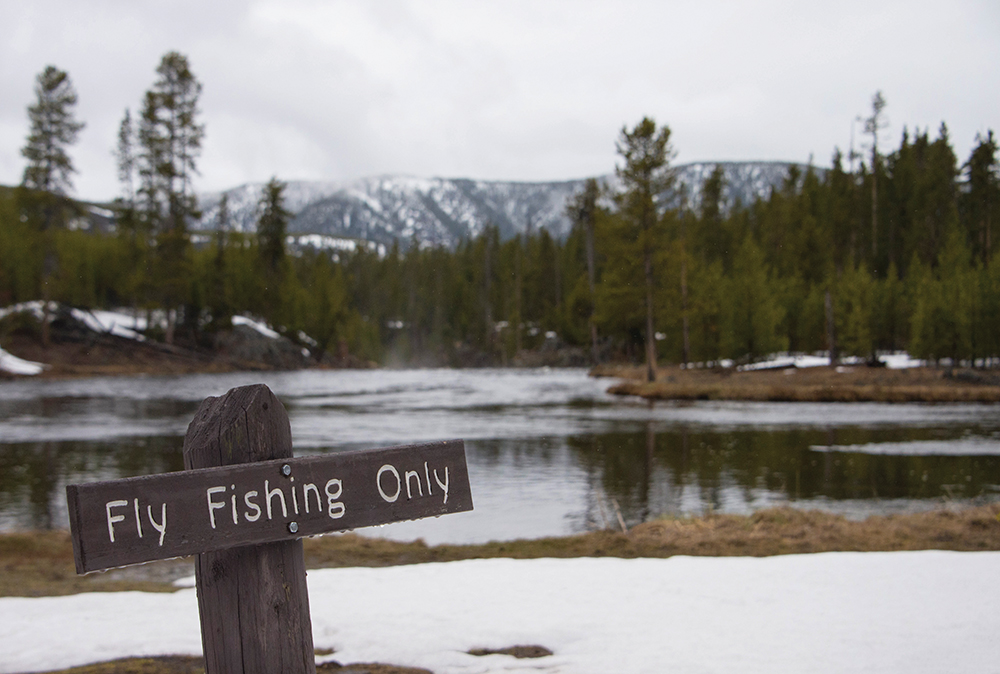 As mentioned in my last article, I made the trek to Montana for what was supposed to be a two-week work assignment. I’ve now been here almost two months. Even though I have been away from home longer than expected, I could not have asked for a finer place to work and enjoy the outdoors. Thankfully, most of the freezing temperatures have passed and the weather is getting better by the day. On top of that, I have had another opportunity to break away from the routine of long workdays and get to the water.

I told you last month I’d been to the Bighorn River and landed a few rainbows, but one of my goals for this trip was to land a brown trout – one of my bucket list species. So naturally, I had my sights set on that and I pretty much refused to leave the state until I caught one. The hunt was on!

Work came first but that didn’t stop me dreaming about my prized fish. It seemed like I was always finding new people to gather information from to help direct me toward that goal. I rather impatiently waited for my next day off so I could slip into my waders and hit the water.

The time finally came and great excitement would be an understatement for how I felt that morning. I grabbed my gear, a cup of coffee, and headed to the river. On my way there I wound through the hills as the sun began to peak over the mountain tops. The Good Lord painted a fine picture that morning. With that, my day was already complete and everything else could only be a bonus.

Arriving at the river, the Canada geese were honking and the sun was shining, what a fine day to be fishing. I waded to the same point that had produced on my first visit, with hopes to start my day off right. I began with the same setup I had been using – two small nymphs under a strike indicator. I fished around the point for about 30 minutes before deciding to move on. Also at this point, my toes were numb and it was time for me to step out of the water; the temperatures might have been rising but the water was still bone-chilling cold. While warming up on the shore I began to plan my next move and decided to change my tactics and try something new.

I flipped through my box and the thought occurred to get back to my usual style of fishing, which means covering as much water as possible to find fish. So, I tied on a streamer, nothing too flashy, I wanted to keep it natural. One thing I have learned, and this applies to anywhere in my opinion, when traveling some place new and you’re not sure what color to throw, match the bottom if you cannot match the hatch. In the case of the Bighorn, I decided to tie on a streamer that was an olive color to resemble the riverbed rocks.

I came to a stretch of rapids a short distance downstream that looked promising. I slipped into the water and began casting upstream while making short, quick strips as my fly made its way down with the current. I continued downriver, knowing I had yet to discover how the fish wanted the fly presented, changing the angle of my casts and stripping style every few casts. I made a long cast and stopped to check the time before beginning to strip the fly. I no sooner slipped my phone back into my pocket when I felt a sharp thump. I stripped quickly, made a hookset, and it was indeed a fish. She made a good run and then leaped high in the air, shaking the hook in the process. I’d been late with the hookset, fooling with the phone. A beautiful sight to see and it was for sure a brown trout, more importantly, the light bulb had come on.

I made another long cast but this time I followed up with long, slow, steady strips. The last bite came when the fly was just floating and I wanted to see if I could make it happen again. It wasn’t three or four casts later, right in the middle of a long strip, I felt a thump. A quick hookset pulled my rod into a beautiful arc. The fish made a few good runs downstream before yielding to the pressure. Making my way into shallower water to accomplish the landing I finally had a chance for a good look and, sure enough, I had a brown trout. Words could not describe how I felt.

I tried not to hurry the landing, although I probably did, nonetheless I had my first brown in my hands. I snapped a few quick photos and released her back into the Bighorn. Check another species off the bucket list.

After that fish I was pretty much mentally spent. I’d achieved what I came to do and doubted I could top that one, anyway. I rested for a few minutes to relive the moment and decided for another try, but I must admit my mood was halfhearted at best.

Gathering what was left of my energy, I began making a few casts, same angle upstream, same slow strips. Bingo, another strike; except this time it was a rainbow. She fought well and I honored her with another catch-photo-release ending.

I decided to call it a day. Regardless of how the rest of my trip went, I’d landed my brown trout and was entirely satisfied, and I’d fallen even deeper in love with the Bighorn. I stopped at the fly shop by my hotel to tell the owner of my success and thank him for all the tips and advice he’d given me.

Montana is a beautiful state and I highly recommend all fishermen should make plans to visit here. While I haven’t been everywhere, this place is the closest to Texas I’ve had the pleasure to visit thus far. The people are wonderful, the land is beautiful, and the attitude toward conserving and caring for it is remarkable. I have visited Yellowstone National Park and it lives up to all expectations, a fine example of what conservation of natural resources can accomplish.

My stay has been very enjoyable but I am ready to come home. I miss my family and friends and I also yearn to see the beauty of a Texas sunrise shimmering on the surface of a marsh pond. It’s been too long since I’ve heard the distinctive sound of redfish crashing bait on the flats. Money cannot buy these wonders of nature, you can only experience them by being there.