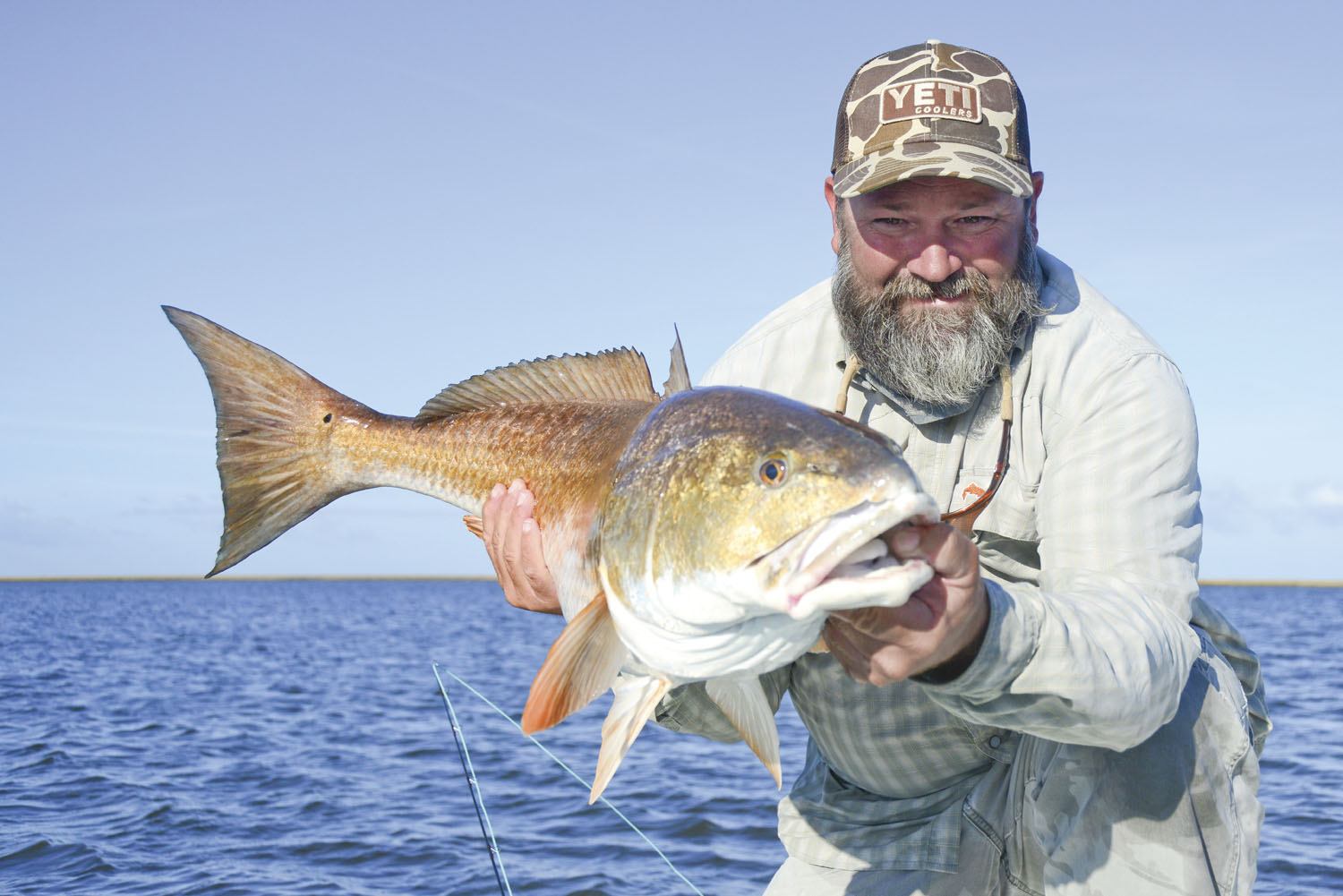 Blind-casting saved the day on this outing.

Not too long ago I had an angler fishing with me. Who'd have guessed that?

Anyway, we had been on the water for about five hours and already enjoyed great fishing. We had landed numerous reds and successfully sight-casted a couple of trout, to boot. The problem was that the fish in the shallows were becoming uncooperative and we still had some time remaining on the day. What to do?

I then remembered bumping a few flounder off a shallow point leading into a marsh drain the day before. I asked if he might like to give them a try and possibly fill out a Texas Slam.

He was curious whether the flounder would be visible and I replied that it would be blind-casting. He scoffed at that and we instead, pun intended, floundered around in the shallows the remainder of the day.

Two days later I had an angler land six reds and seven flounder. Unfortunately, there were no trout to fill out the slam. But seven flounder on fly in a single day is something to be proud of I don't care who you are. And the take-away is this: No angler will ever come close to accomplishing this feat unless willing to blind-cast.

Now, knowing that I have touched on this topic in earlier writings, I will do my best to provide a fresh perspective in regard to it. But, before moving into that, I will revisit one key issue rather bluntly, hoping to break through some of those hard heads out there, (no reference to saltwater catfish thank you.)

For whatever reason, a goodly portion of the Texas fly-fishing community find it beneath their angling dignity to fish blind.

Hogwash. Get over yourselves already! Chances are the reason for your reluctance lies in the fact that you are not a good enough caster, and not sufficiently dedicated to your pastime to become good enough.

So, tough love and all of that. But seriously, blind-casting is an important aspect of becoming a good fly-angler and it opens doors to spectacular fishing opportunities.

A perfect example would be for the guy (or gal) planning a family vacation to say, Cape Cod. One of my single-greatest fishing days occurred off Woods Hole, there on the Cape. We caught over 200 stripers and bluefish that day and nearly all were caught blind-casting. When you get right down to it, most fly-fishing in salt water is done by blind-casting.

There are many aspects to being successful when choosing to cast blindly with a fly rod. That said, you have to know where, and more so, when to change tactics. As for specifically when let's just say any time that you think or know fish are present but you cannot see them.

So, as I mentioned aboveI poled across a point and bumped a few flounder. Having already spooked them, it made no sense to try to catch them and I filed the info in the back of my noggin, hoping I might soon return. Two days later the tides were not significantly different and we managed to catch a few. From there we moved to a similar spot and stuck a few more.

The point I want to make is that certain combinations of current, water level, wind, etcetera, can cause fish to stack in marsh sloughs, down-current sides of reefs, a drop-off in the bend of a bayou, or even on a point. These are but a few of many places that make sense to try a few blind-casts.

The important part of employing such strategies is in realizing what they have in common and that is rather abrupt changes in bottom structure. One thing to remember is that all fish relate to structure and even the slightest change in bottom contour constitutes structure. Once you have found a structure type that fish are identifying with, you have discovered a great place to ply the waters blindly with a fly. I will leave you with one final thought in regards to "where you should blind-cast" and that is seek similar structure features in other areas because they too are likely holding fish.

One of the key elements in being successful when blind-casting comes with choosing the right fly-line and leader combination. This can make the difference between a fish or two versus really beating-up on them.

Fly lines come in four basic types: floating, sink-tip, intermediate and full-sinking. It goes without saying that your choice of fly line will obviously be determined by the depth you are fishing. I would say if you are fishing less than two feet a floating line is the way to go and when fishing deeper than twelve feet you need the full-sink. The sink-tip and intermediate will fill in everything in-between.

Another important consideration is your leader. As a rule, when blind-casting a floating line, I prefer as long a leader as I can manage with the fly I have chosen. This gives me more fishable water that the fly line has not been over. Also, if I am using a topwater fly such a popper or gurgler, I build my leader with monofilament as it is more buoyant than fluorocarbon. As for a sinking line, I like a shorter leader tied from a little heavier fluorocarbon. When fishing near bottom and expecting shell or rock, the heavier fluorocarbon helps reduce the potential of break-offs.

The trick is to choose a fly that will get noticed easily or that will hopefully draw fish from a distance. You have two options move some water or make some noise.

When fishing blind in shallower water, my first inclination is go either white or black, and always bulky. White reflects ultra-violet light and black creates extreme contrast, making each more visible at a distance. As for bulkiness, this enables the fly to move water in such a manner that fish can "feel" it and hopefully come looking for it.

In deeper water I sometimes choose a more slender and weighted fly that will sink faster, especially in current. In this situation I almost always use a darker fly with a rattle. Remember that the trick is to draw the fish to the fly. The slender fly has less presence in the water, that's where the rattle come in.

There is so much more I could delve into but, unfortunately, I have run out of space. I do want to leave you with one final thought, though. If you find yourself on the water and not finding fish or able to see fish to sight-cast to–do not look down your nose at the prospects of blind-casting. It is a great way to not only catch fish but to also practice your casting and hopefully, hook-sets. And believe me, we can all use the practice.