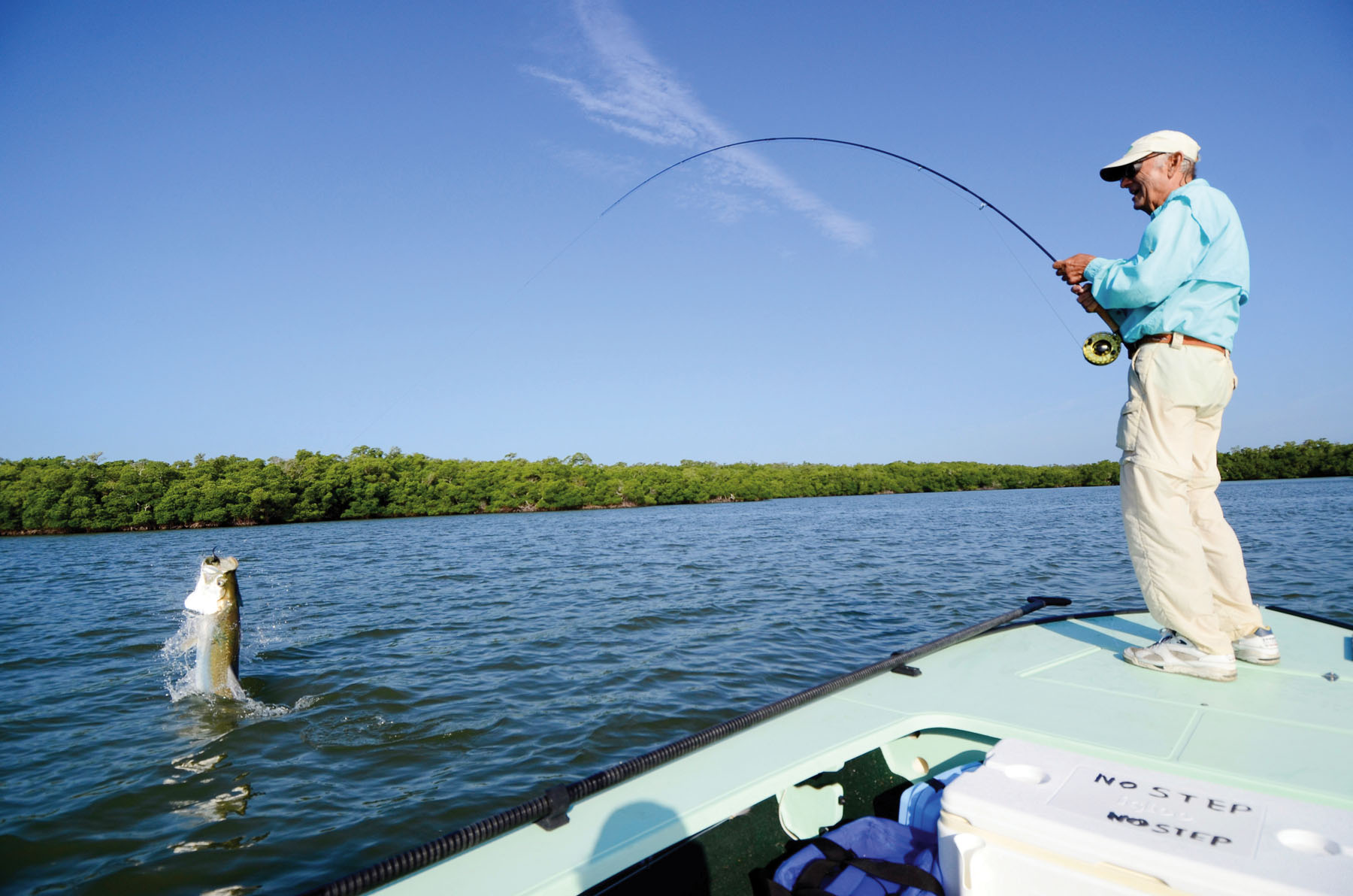 As I sat there admiring the very first Billy Pate reel ever made, the machine marks still visible some 40 years later, I came to the realization that I was holding a true piece of fly fishing history- the reel that made it possible to tame the largest and wildest of fish. This time last year I had the privilege sharing a skiff with the man that designed and hand-machined the reel.

Seeing the free-jumping tarpon silhouetted above Ted Juracsik’s head only ten yards behind him in the early morning sun was, to say the least, a surreal moment. I can still remember the first time I held and admired a Billy Pate reel in my hands and reading the engraving on the side that said “By Ted Juracsik.” I did not know who he was but thought to myself- he must be special if his name is engraved on this reel. I never would have guessed that twenty years later that I would be sharing a skiff with him.

“You get a little excited, don’t you?” he asked as I announced the presence of every tarpon that rolled within eyesight. “Well, tarpon make me stupid,” was my reply. He smiled.

As the morning progressed, I poled the skiff around and I watched him meticulously cover the water over the top of and around every rolling fish. As he worked over one area, I saw a tarpon roll at our nine o’clock and called it out. He quickly changed the direction of his cast and laid the fly out just beyond the roll and started counting the fly down before the retrieve. Moments later his line came tight and the water erupted as nearly a hundred pounds of silver took to the air. I watched in awe as he calmly played the fish with a smile on his face as he admired the smooth drag of his latest contribution to the world of fly fishing- the Tibor Signature Series reel.

After fighting the communist Russians in 1956 during the Hungarian Revolution, Tibor  ‘Ted’ Juracsik barely escaped to Austria and then the United States. Arriving here with nothing but the clothes on his back and a trade. Having left all of his family and friends behind, Juracsik found shelter in a refugee camp in New Jersey and then an orphanage in Brooklyn where he started his new life.

Already a master tool and die maker (machinist) at the age of 18, Juracsik found it difficult to find work in his trade because here in the states, we had not converted over to the metric system. Surprisingly though, it was his skill at soccer that got him a job in a watch factory packing boxes. Some guys had seen him playing under the Brooklyn Bridge and told him (through a translator) if he would play on their team they could get him a job in a watch factory.

“It was very tough looking at all those machines that I knew how to run, but couldn’t because of the crazy measurement system,” he said of the experience. “I know everything metric but not that crazy system.”

With a strong work ethic though, Juracsik learned our “crazy” system and before much longer was working in his trade. Not too long after, he set out on his own.
As for his introduction to the world of fly fishing and the creation of the Billy Pate reel… Here is the story as told to me by Mr. J.

Well it was in 1962 and I wanted to get married because I had nobody here and start a family to get stable. So I got married and I had two jobs. When I got married I got a third job and figured out real quick, if I was to get ahead, I would have to start my own business. So then I had an opportunity to make some tools for some people but I did not have any machines and we were living with my in-laws. So I asked my father-in-law if I could buy some machines and put them in the garage. He said it would be alright so, I quit my third job and would come home and work at night making things for other people. That’s how I got started. When things got better I quit my second job and my regular job. I started doing really well after three or four years.

By then my in-laws had moved to Florida, and I had a guy working for me who was doing really well making stuff.  So we went to visit Florida. Me and my wife and daughter, Marianne and what I saw was incredible- the fishing. I had fished some in Long Island with my brother-in-laws, they were surf-casters for stripers so I did a lot of surf-casting back then. After visiting Florida I said to myself, I gotta figure it out and somehow move to Florida because that is where it is at.

So one winter, while I was visiting Florida, I met Tony Lay. He was fishing one of the bridges for snook and we became friends and I kept contact with him. Then in ’72 or so I came down to visit again and he went to work for Worldwide Sportsman and that is where I met Billy Pate.

And one time, Billy Pate came in and was complaining about his reel and how he had lost a big tarpon because his drag wouldn’t work right and it locked up. Then Tony told Billy that I would make him some reels that he would not have any trouble with and Billy says, “Really, you make fly reels?” and I said well let see what you got. He had Finor anti-reverse so I took it apart and I could see right away what was wrong with his reel. To me it is just a piece of machinery. I could just look at it and tell that it’s not right. So I said, I can make you a couple of reels.

So I went home and drew it up and started making them. Everything back then was hand-made because we didn’t have any CNC equipment. So I made these two reels in my spare time and went back to Florida the next year to fish with Tony and I gave Billy the reels. He really liked it right away. He asked me if I could make him some more so he could sell them in his store but I told him that I could not make him two or ten because it would be way too expensive but…I could make a hundred. And that is how the Billy Pate reel started.

Believe me when I tell you folks- this only a very small part of an incredible story. And, if I had the space to tell you more, I would.

In regards to the time I was able to spend with him- I will forever be grateful. The things that I learned not only about fishing and the Everglades but also about the world and the hardships that I have never known will remain with me until the day that the Good Lord decides to take me from this world. He is a man to be admired for his strong work ethic and patriotism. And, I have never met a man so proud to stamp every one of the products that he creates with the words- MADE IN THE U.S.A.