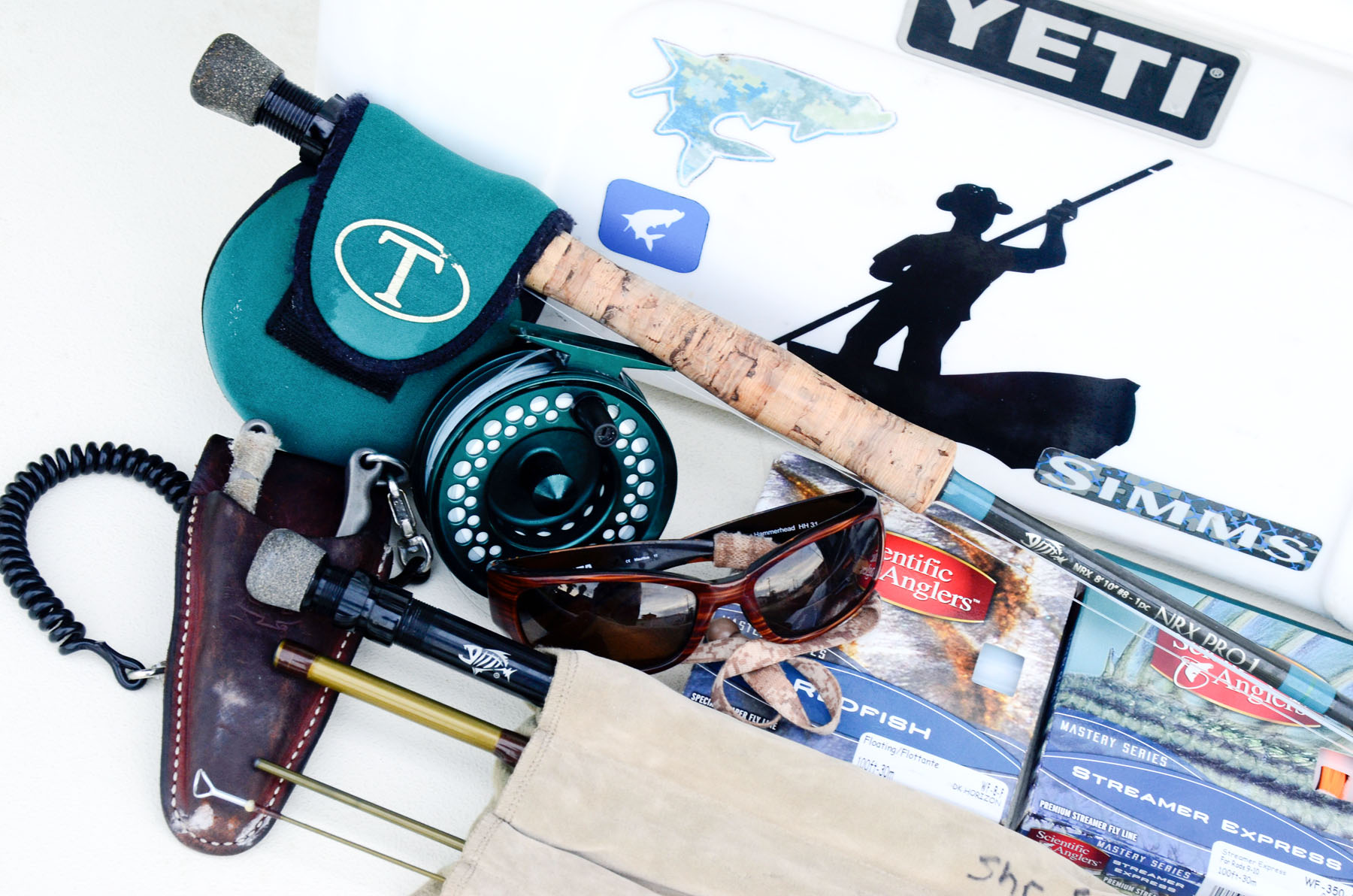 Spares of certain essential items; rod, reel, line and fishing eyewear, should always be part of the fly angler’s on-the-water kit.
Over the last couple of weeks I have been taking note of all of the things that happen and do not happen on my skiff. By that I mean, I have noticed all of the little things that have hindered my anglers’ abilities to take full advantage of the opportunities presented during a day on the water. After discussing these shortcomings with my peers from within the “fly-guiding” community, I decided to compile, with their help, some tips. So, here is some information that will hopefully help you all achieve greater success while on the water.

In regards to casting and fishing-

It is the general consensus amongst the people that I spoke to that the anglers who step foot onto their skiffs do not spend enough time practicing. Well, if you read this column often, you have probably have heard me say this four or five times over the last couple of years so, rather than just saying it this time, I thought I would give you some specific things to work on.

First, I will recommend that you practice casting while sitting in a chair. This will teach you to cast with your arms rather than your body. The benefit of doing this exercise is that it will prevent you from rocking the boat while casting, resulting in fewer spooked fish.

Next on the list is to allow your back-cast to completely unfurl behind you. Many bad casts are a result of not letting the fly line straighten behind before beginning the forward stroke. The result is a cast that either crashes in a heap in front of you or, if you are lucky enough to be able to get fly in front of a fish, a cast that lands with so much slack that you have to strip in half the line before the fly ever moves.

Another important aspect of practicing is do not just practice the cast but also the retrieve. Just last week I witnessed at least two dozen missed fish because, despite the fact that the angler successfully delivered the fly to the fish, they fumbled with the line before beginning the retrieve. The result – a fish staring at a fly sitting motionless on the bottom that eventually spooked. By practicing the action of completing the cast and immediately beginning the retrieve, you will be able to create muscle memory that will allow you to react without fumbling when the moment of truth comes.

Lastly, do not manipulate the fly with your rod and do not, I repeat DO NOT, attempt a trout set. It is important to keep your rod tip pointed at the fish so that when the fish eats, you can set the hook with a strip. If the line does not come tight on the first strip, keep stripping. Once the line comes tight, then raise the rod with the power of the butt section. Remember, fly rods are not made to set the hook by lifting the rod. Sure, that might be the way you learned to do it in Colorado while fishing nymphs below a bobber but that has little application in the salt.

In regards to gear-

Probably one of the biggest mistakes I see from people hoping to sightcast to a fish with a fly rod is the clothing that they choose to wear. It is important to remember that if you can see a fish, that fish can see you. With this in mind, imagine that when a fish looks through the surface of the water it sees blue skies and white clouds but then, wait, what else? Some bozo wearing a bright red shirt, UT orange or Aggie maroon? Bright colors, including black, should be avoided. Blues, greens, grays, khakis and whites are the way to go. Remember, getting close to the fish is the name of the game when sightcasting.

Another, good piece of advise that I heard more than once was to carry spares of everything that is important to your success. For example, if you only have one rod and reel and either fails or breaks, well, your fly-fishing adventure is over. This also goes for fly lines. I have seen numerous fly lines shredded on oyster shell or barnacles on mangroves over the years. It is no different than breaking a rod because one is useless without the other. Do not forget an extra pair of sunglasses as well. Nothing can ruin a day of sight-fishing more that to loose your glasses while the boat is running or to have someone sit on a pair and loose a lens. Granted, most guides will have extras of everything that you might need but, not all of you fish with a guide on every trip.

Last but not least, carry a waterproof box or dry bag to insure that things like wallets, phones and keys stay dry. I once had a guy have to call a tow truck because his key to his car got wet in a rainstorm. Ah, the joys and wonders of technology….

There are of course many other little tips that I could give you from backing off the drags of your reels to throwing your used flies in the ice chest and drying them at the end of the day but I will stop there. Actually, I will give you one last tip- Do not drink while you drive. You are liable to hit a bump and spill the whole thing. I’m joking of course.

With that being said, I will make a politically incorrect statement and wish you all a Merry Christmas and of course… stuff like that!