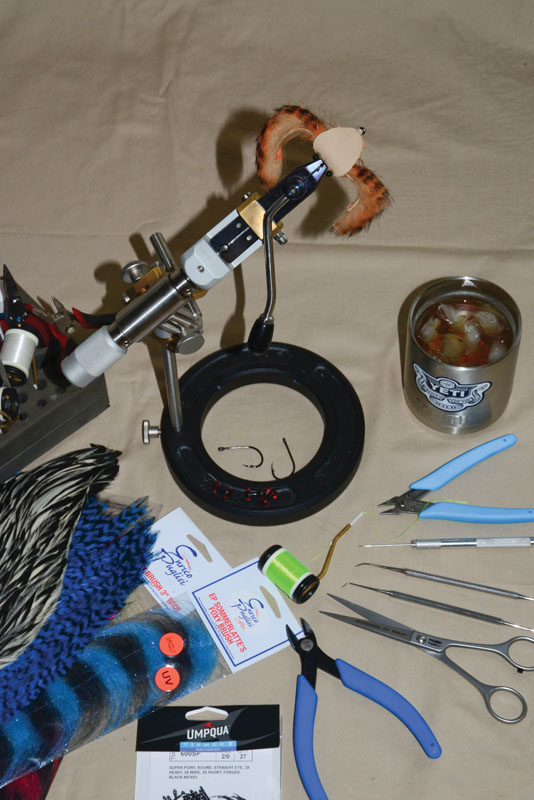 Not too long ago I had a friend over for drinks. While talking fly-fishing, the subject of flies came up and he asked if I would show him how to tie a particular pattern of mine that he liked using. I of course agreed and we ended up in my "gear room" making up some bugs. Upon the near completion of the fly I pulled out what I call my "finishing" tool and he told me how cool he thought it was and made the suggestion that I do a piece on all the little special tools that I incorporate into my daily tying sessions. So, I sit here, in the dark (the power got knocked out by a tornado last night), hoping my computer battery has enough juice to give you the 411 on my fly tying set-up.

It goes without saying that, outside of materials, there are three essential items (tools) required to tie a fly. First, unless you are Joe Brooks, you need to have a fly tying vise. I have several that include a Renzetti, two Regals and an Enrico Puglisi custom. Now since I mentioned the Puglisi vise a few articles back, I will not go into too many details other than I love the thing and do not want to use any of the others. Secondly, you need bobbins and thread in which I prefer those with a ceramic tube and tension adjustment. Last, but not least, you need to have a good pair of scissors, but more on that in a bit. These are all the things you NEED to have to tie a fly.

But–before I move on to what I consider to be the special tools I want to talk scissors. There are all kinds of different types of scissors and although you only need to have one good, generic pair, I highly recommend having four different pair to help enhance your tying. First is a standard pair of scissors that can be found at any fly shop. These will normally have 2.5 to 3 inch blades and some common brands are Anvil and Dr. Slick. Orvis also has some decent scissors. Next on my list is a pair of scissors that are much longer for making flowing tapers in flies created with synthetic fibers such as EP Fibers or Craft Fur. The best scissors for this are barber grade that can be purchased online from a barber supply or you can order them at epflies.com. Another pair that I find to be necessary is what I like to call my "trash" scissors. I usually find these at a hobby store and I use them for cutting foam or leather. The point being is, these scissors are cheap and what I consider disposable. Last but least, and not surprisingly, is what I consider to be the least important pair. This last pair is what some might call a finishing scissor or a fine-cut scissors. These usually have to 1 inch blades and are used to reach into to tight spaces to clip unsightly fur or feathers. Again, these are not necessary, but nice to have.

Moving on, let us get into the tools that will help you take tying to the next level.

The first of these special tools that I want to tell you about are pliers. I cannot even begin to express how nice it is to have a diverse selection of pliers at your disposal while tying. The single most important pair of pliers to have is a pair of precision side-cutting dikes that can be used to cut anything from heavy mono for weed guards or anti-fouling loop all the way to the wire that binds the EP Dubbing Brushes that I have grown so fond of utilizing. Next on my list is a pair of small needle-nose with transverse grooves in the jaws. These are not only great for grabbing hold of things and pulling it tight, but also usually have a side-cutter in the jaws. The grooves in the jaws are also great for imprinting monofilament in such a manner that your tying thread will lay into the grooves and prevent a single-post weed-guard from slipping out from beneath the wraps of thread that create the head of the fly. Another pair of pliers that I find helpful is high-leverage end-cutters. These can be used for all but the most precise cutting but where I find them the most useful is for cutting lead wire and bead-chain eyes. All in and all done, I have about 6-7 pairs of pliers laying around my tying table but the ones mentioned are certainly the ones I find most useful. If you are looking for the cheapest option, head over to the hobby store or to Sears. When I shop for pliers, I like to go either to the hobby store or a small hardware store and look for the Made in U.S.A. label.

From pliers we have to move onto bodkins and picks. A half a dozen different companies make bodkins but they seem to be way too wimpy for most saltwater tying jobs. I personally prefer the bodkins that EP sells on his website but have also found good ones at the hobby store. In addition, I keep a set of dental picks that I also found at the hobby store at my side that prove handy doing precision work. The purpose of bodkins and picks is for pulling dubbing free when palmering and also for the application of epoxy and other glues. One other final piece of equipment that I feel fits into this group of tools well would be a hobby knife that comes with various types of exchangeable blades. These can be found at the hobby store as well.

Another item that I find to be helpful, especially when tying with synthetics is a fine-toothed rattail comb. It goes without saying, they can be found just about anywhere, so I will move on to what I consider to be one of the most valuable tools in my fly tying arsenal.

So last but not least, the "finishing" tool I spoke of in the beginning of this piece that inspired this rant. The tool I speak of is a cautery "pen" or "tip" used for surgical applications. This item can be found all over the net but most are disposable and have relatively short battery life because they become medical waste after one single use. I use a specific one marketed by Hareline Dubbin (hareline.com) that has a replaceable tip as well as an AA battery power source that allows for replacing. In short, this tool allows me to burn out any fine hairs, furs or synthetics that may either be unsightly or interfere with the finishing (epoxying) of the head. It surprisingly gives much more room for error when tying.

So–with that being said, I hope I gave you some ideas to help enhance your tying experience or, if nothing else, given you a piece that you can throw down in front of someone special to give them some ideas for you a Christmas gift or two.

Until next month... be good and stuff like that and... Merry Christmas.