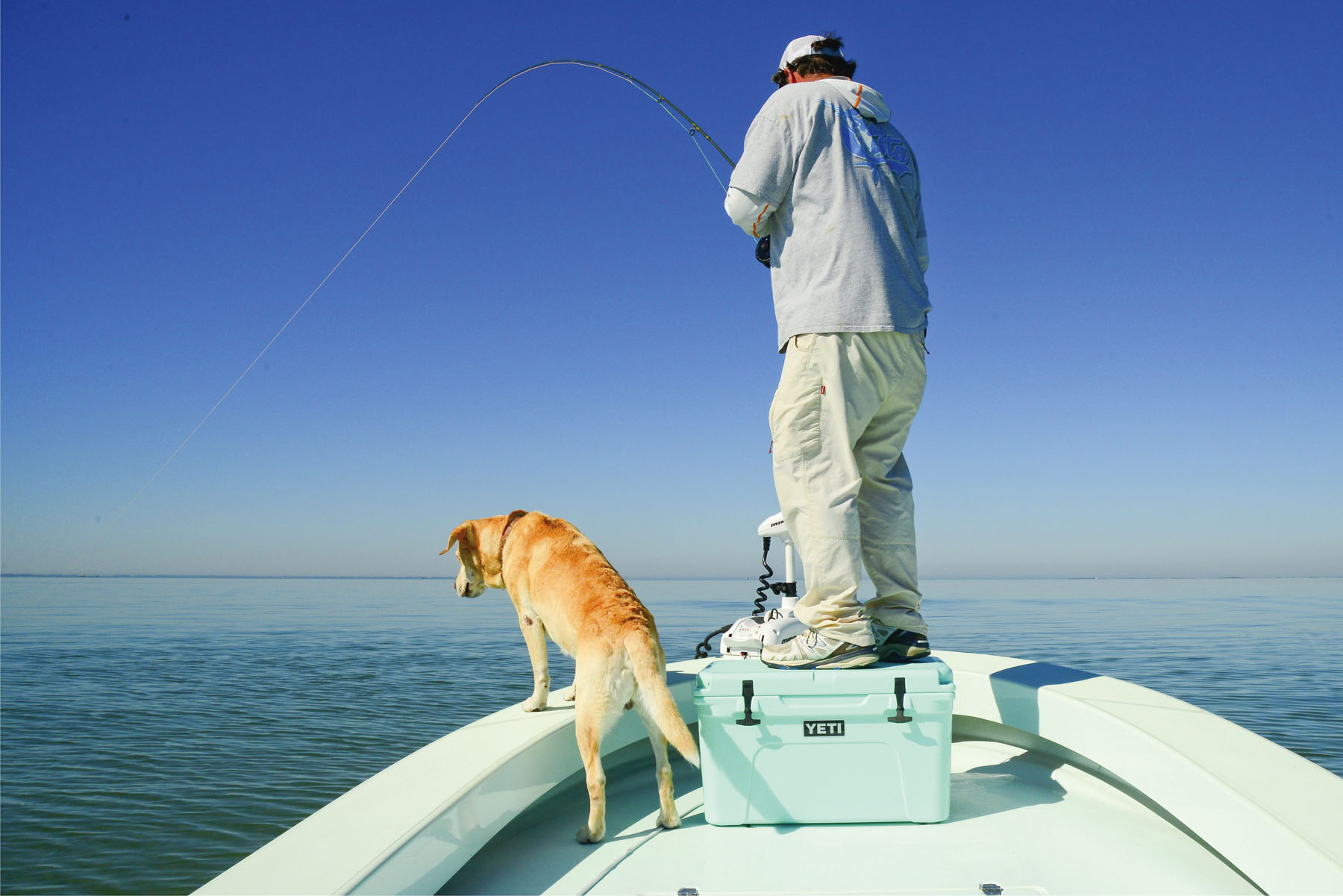 A frequent question I hear from friends and clients is: "Should I put a trolling motor on my fly-fishing skiff?"

My response usually goes something like: "It depends on how you intend to use that trolling motor."

And then of course there's the typical reply: "Well for the days that I am by myself and don't have somebody to pole, I can use the trolling motor to get around the flats."

My answer then of course is: "No, you probably shouldn't waste the money on it. However, there is a place in saltwater fly-fishing for trolling motors when they're used appropriately."

You see, as a rule, most of the fly-fishing we do in Texas is in water that is 6 to 18 inches deep. In my experience, it is the rare occasion that you can sneak up on the fish with a trolling motor in water less than 2 feet, especially if there is a lot of grass in the area that you choose to fish. It seems to me, it's not so much the sound of the electric motor that spooks fish, but it's the propeller striking grass or sediment such as shell or fine gravel that it sucks up off of the bottom in shallow water.

Again, as a rule, trolling motors in water less than 2 feet are not very effective. However, they have many applications for the fly angler willing to think outside of the box.

Recently I took out the Seadrifter (22' Panga Marine Marquesa) for her final voyage with me as her owner. It was an insanely beautiful winter day and I just could not sit still. So–Sonny (my pooch) and I launched the boat and picked a compass heading. The water was chilled to say the least and I knew that if I wanted to catch a fish I would have to fish in deeper water, so I kept an open mind. I decided to take advantage of the glassy conditions and over 6 feet of clarity and I headed north into the upper end of the bay to explore some deeper reefs on the edge of the ship channel.

Upon arrival at the first reef I dropped the trolling motor and pulled out my fly rod. I began in about 3 foot of water and started out slow but after several hundred yards of seeing no signs of life I decided to move out a little deeper and start moving a little faster. This did nothing for me so I started zig-zagging, covering air-clear water from about 3- to 6 feet and then it happened. I spotted a big fish lying near bottom in about 4 feet of water. I made the cast and I watched the fish swim off under the fly. Well, I at least had a starting point.

Utilizing the GPS tracking feature on my iPilot, I set a course that would take me down what I believed to be a track of water averaging about 4 feet depth. Lo and behold I started seeing occasional fish but I continued to go fishless. They would not rise to the fly and I just could not get the offering down to them. Fortunately I had a spare reel with a clear sinking line. This, combined with a fast sinking crab pattern, did the trick and I landed a 35-inch red.

Unraveling this puzzle was already enough to make the day a success but it continued to get even better. The next three fish were large black drum that bottomed out my 30-pound Boga Grip. This made the day a huge success and a great way to end the Seadrifter's career but, my point is, there are many other ways to utilize a trolling motor than in perfect conditions.

Trolling motors, especially when used in tandem with iPilot, offer fly anglers the ability to work shorelines or hold position in channels hands-free, while blind-casting for numerous species ranging from redfish to tarpon and even make fishing offshore easier. We have used them to hold position behind shrimp boats while fishing for kingfish and even over wrecks while chumming amberjack from the bottom to for very exciting sight-fishing. In fact, one of my most memorable offshore trips would have been a bust if had not been for being able to utilize the anchor feature of the iPilot to hold position a couple of hundred feet off the up-current side of a rig and chumming cobia and snapper to the surface.

In all honesty, now days, a great number of the fish we catch are done so by utilizing a trolling motor to fish in deeper creeks, bayous and river channels, especially in the summer and winter months. And, we have had some stellar days doing so. The trick is to approach the use of an electric motor as a way to cover or hold position in deeper water.

In short, the electric trolling motor is a valuable tool for the fly angler providing they choose to fish in such waters deep enough to not spook the fish.

Until next month - Be good and stuff like that.