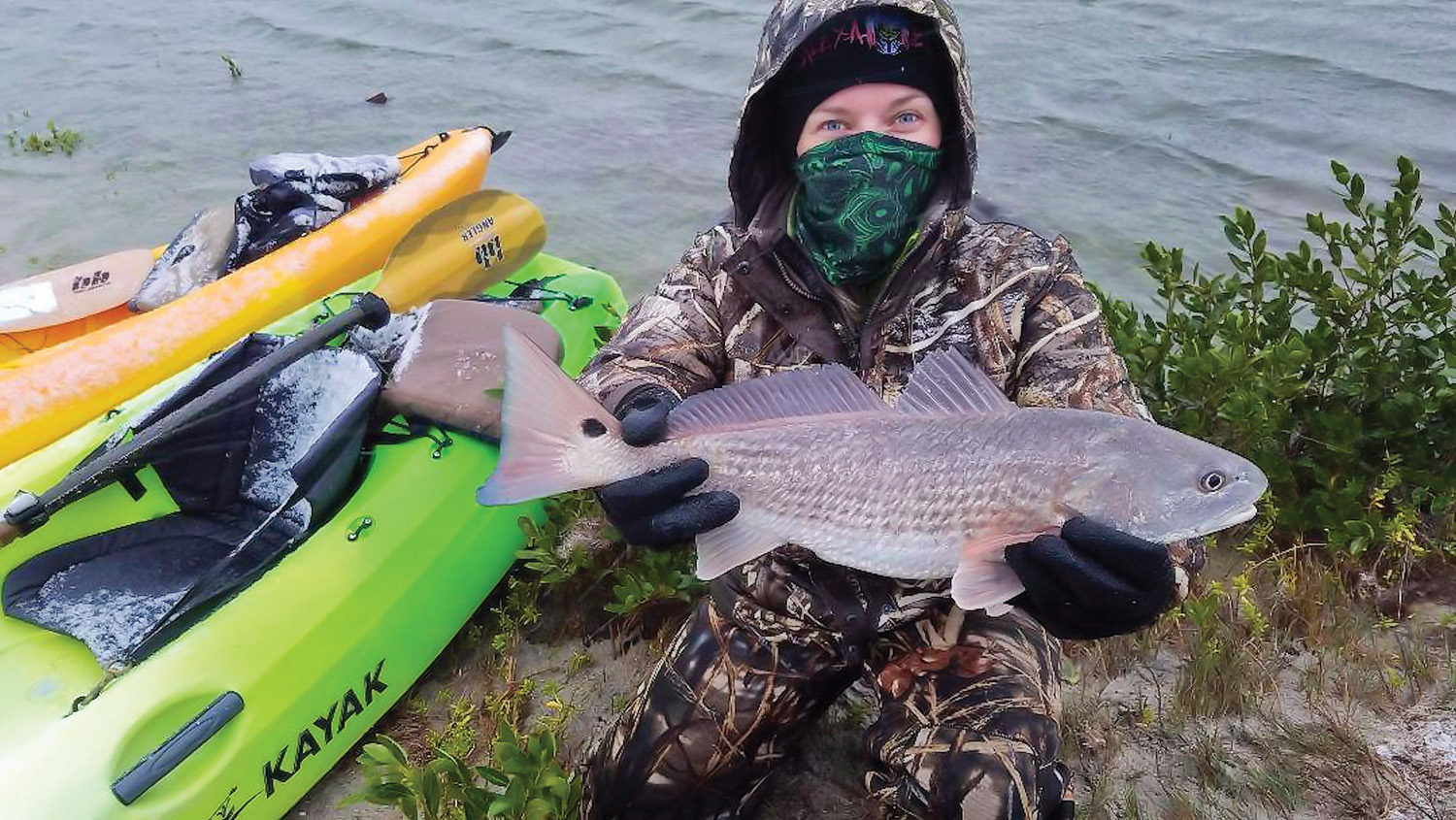 That’s my better half, Alexis, under all that cold-weather gear. She sure made me proud, fishing in that snowstorm!

Within a four-month span during 2017, the Coastal Bend region endured both a catastrophic hurricane and a snow storm. As if these were not enough, with coastal temperatures forecasted to dip into the low-20s, TPWD issued a temporary fisheries closure on New Year’s Day 2018 to protect gamefish stocks. Twenty-two locations known to harbor gamefish seeking refuge from freezing temperatures between Brazos Santiago Pass at the tip of Texas and Bridge City on Sabine Lake were closed to all fishing for 48-hours. Even through such a wicked string of calamitous weather events our fisheries continue to thrive.

Hurricane Harvey was responsible for relocating tremendous numbers of snook from South Texas bays to the Gulf of Mexico and along the beaches – perhaps more than we even realized lived in Texas waters. Unlike the gin-clear waters of Florida, average water clarity in Texas bays precludes the opportunity of seeing fish in many places. One thing is certain though, common snook showed in unexpected numbers after the hurricane. December’s cold evidently pushed them back into hiding, but what remained was a phenomenal run of bull redfish that absolutely wreaked havoc in the surf.

Red drum (Sciaenops ocellatus) are among the many pleasures of saltwater fishing. In the bays, anglers target them on light tackle. Their stocks are currently quite healthy, providing a sustainable fishery for everyone to enjoy. Most of the reds people target in the bay are of slot size – 20- to 28-inches. While larger ones do roam the backwaters, most of the oversized red drum spend their time in the gulf and along the beaches. Reds of all sizes can be found in the surf. In fact, they are probably one of the more abundant gamefish species present.

Starting in October, during their annual spawning run, mature specimens can be found all along the beach. This past fall though, it seems everything was greatly delayed, likely due to the unseasonably warm weather. Mullet migrations were behind schedule, and the reds that typically follow them were just not present. Concern grew among beach anglers. Ladyfish were still present in great numbers as December rolled around, a species that we expect to see diminishing during November. Jackfish action along our beaches had also been quite weak. Along with the redfish, the jacks typically storm the beaches demolishing the great hordes of mullet traveling the shallows. Just as the fish were confused with the conditions, we too were wondering what was going on.

Then the snowstorm on December 8, only the eighth time in seventy years a measurable snowfall would cover South Texas beaches. Ironically, I had a week-long fishing trip and major film shoot scheduled at that same time, the subject of which was to be large sharks from the beach. With a thin layer of snow covering Padre Island and temperatures in the low-30s, the filming had to be delayed.

With a few days on our hands, better half Alexis and I decided to venture out in the treacherous conditions anyway. We took to the kayaks at sunrise on the 8th to hit a favorite wintertime wading spot. Paddling to our spot was nothing short of brutal. At one point we faced near white-out conditions with less than 100-yard visibility. Nonetheless, we battled the elements and during the peak of the storm Alexis hooked and landed a hardy redfish. A redfish being landed during a Texas snow storm was quite a sight and made me extremely proud of my girl! We fished through the morning and ultimately ended up with limits of redfish, trout, and flounder!

As quickly as the snow arrived it began to disappear. Likely a by-product of the sudden ultra-cold snap, the masses of mullet that had “been on hold” in the bays were finally triggered to begin making their way to the surf. With my filming schedule set to resume, things were looking up.

Right before Christmas we embarked on our major adventure down Padre Island. The first couple days were still quite cold, although the water temps were running mid-60s – roughly on par for December. Almost immediately we were into tagging and releasing large sandbar sharks. Though valuable to the show and the taggings would prove useful in sandbar research, we were hoping for something much larger. We put on a great effort starting around daybreak each morning, and then deploying “big shark” baits later in the afternoon. Mullet were running in knee-deep water the whole time. Considering the bait presence, several of our party decided to try our luck obtaining fresh jacks for bait while we waited for the shark rods to go off. Almost instantly we had non-stop action on casted baits, but not the jacks we were hoping to target.

We knew the reds would be around but did not realize the numbers we would encounter. As soon as the baits went in the water we were hooking up oversized redfish – every cast. There are many times when bull reds will frenzy in the surf, but for several days straight and this late in the season is fairly unusual. I had the research team and even the film crew taking part in the action during slow periods of filming, catching the largest fish of their lives. On multiple occasions we had double and triple hookups. To me, this is some of the most exciting gamefish action you can have in the surf, aside from sharks, of course.

We caught and released so many redfish that nobody could keep count. Many were remarkable for the shape of the dot on their tail and all were admired for their brute strength and stubborn fighting ability. While we never truly hit the prestigious 50-inch mark, we got very close, and enjoyed hundreds of incredible photo-ops. As with my regular charter groups, any and all who pose with a giant redfish sport ear-to-ear grins. And kids simply love them!

Despite hurricanes and treacherous winters, it is satisfying to know that the red drum is a very versatile and hardy species. They are found in every body of salt water in Texas, and even some fresh water lakes hold stocked redfish. I am very pleased in knowing that on just about any charter trip I run, the people I take can have an excellent chance to catch such a great fish, or two, or many.

Mature red drum, though a very sporty game fish, do not make great table fare. The greatest majority of our red drum landings are released unharmed to spawn and hopefully fight another day. Conservation is truly the key to the future, for not only red drum, but all our coastal species. Whether on the shallow grass flats, breaking surf, or nearshore structure, you never know when you may encounter this elegant “dot” of the sea!