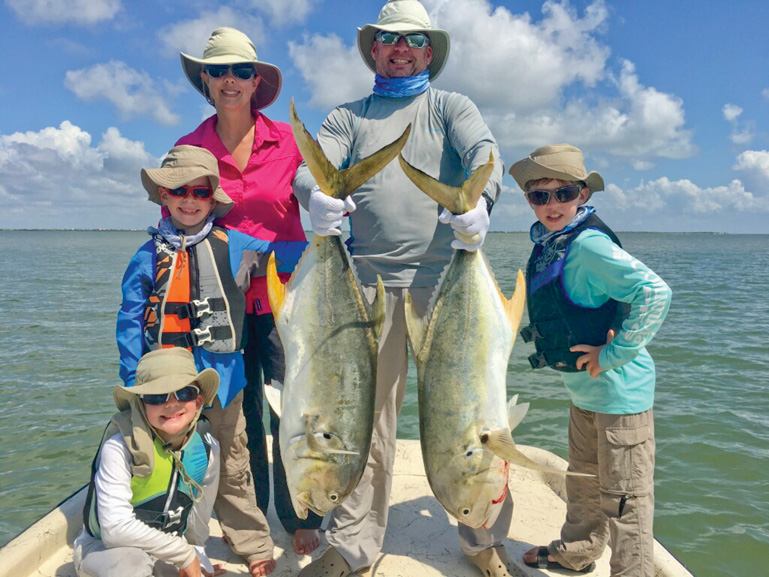 Jacks are a crowd pleaser, evidenced by the big smiles of the Atkinson family.

The new weekend snapper season has been much of the talk on the dock lately. The US Department of Commerce intervened and reopened the 2017 private angler recreational season in federal water for 39 additional days. Each Friday through Sunday will be the season through the rest of summer, concluding on Monday of the Labor Day weekend.

With a joint effort between federal and state fisheries, the extended season started mid-June. In the state waters, snapper fishing is closed Monday through Thursday. No snapper may be retained from state waters on these days until September 5.

The additional 39-days for recreational snapper anglers was welcomed with enthusiasm. Many of the offshore anglers I visited with during the brief 3-day federal season we were originally granted were highly disgruntled. Many of them regarded the shortest season ever as adding insult to injury. Many boats fished the full 3-days, rough seas or not, just to satisfy their need for revenge. It has been no secret that the restrictive federal water recreational angler harvest has been a bad joke played on many.

I am very excited about the new Matagorda Island 562 Port O’Connor artificial reef. I have been out to the area several times and really like the layout. I expect great things to come of this reef. As of this writing, biologists with the Harte Institute have already found juvenile red snapper living amongst the pyramids. As the structure continues to gather growth I would think more and more fish will congregate.

The orientation to nearby decommissioned oil and gas platforms is perfect, ideally enhancing one another over time. The reef is easy to drift across or troll the perimeter in search of fish.

When the reef is holding visible bait schools, like blue runners or Atlantic bumper, there are definitely kingfish nearby. Recently we have caught kingfish, bonito, Spanish mackerel and shark while fishing the area. I haven’t bottom fished the new pyramid structures yet but plan on it during the calm days ahead.

Historically August has some of the calmest weather of the season. These days with light wind allow the average boater shots at nearshore action. Many times the calmer weather conditions help with clearer waters and offshore currents that push closer toward the beachfront. Often blue water will be found in Texas state waters. The inshore offshore currents that collide normally produce a distinct change of water color.

In addition to great weather, this month hosts bonus fish species in our nearshore waters. The nutrient-rich offshore currents bring a variety of forage. Bait balls of ballyhoo, cigar minnows, threadfin herring and dusky anchovies are pushed close to the beach. Oil and gas platforms, reefs, and current breaks offer structure that concentrates the forage and draws the predators. It is not unusual to catch kingfish, Spanish mackerel and little tunny inshore this time of the season. Ocean pelagic species make occasional appearances; sailfish, dorado and barracuda.

Offshore current seams are my favorite structures to target while looking for bait balls. I normally troll with a deep diving lure, a spoon on the surface, and a 5- to 7-inch skirted lure farthest back in the wake. I work the blue water side slowly while watching the surface for bait, floating debris or feeding fish. When fishy-looking areas are located I make several passes through them to locate feeding fish.

In August, there should be plenty of days we can run to the surf. Waiting on our arrival are plenty of predators searching for prey. Variety is the norm here and being rigged and ready for them is the key to success.

We’ll focus on a couple of species other than trout and redfish, let’s try Spanish mackerel and pompano. Many of the same lures can catch both but presentation and positioning make up the difference. Pompano prefer a lure to be hopped across the bars, spitting up puffs of sand as it is reeled. The Spanish like a fast-moving lure nearer the surface between the guts, reeling the lure straight in works well.

Speck-rigs and silver spoons are deadly near the beach sand bars. One of the problems fishing either is the difficulty involved while casting them on heavy bait-casting tackle. Trout-sized spinning tackle works well for increased distance. I like a 7-foot medium fast action rod paired with a 3000-series reel. Spooled-up with 15-20lb test braid makes for longer casts and less line twist problems compared to 10-12lb test mono.

The white-colored 1/8-ounce- sized speck-rigs work great, but are very light. The weight allows them to cartwheel during the cast which makes them increasingly difficult to get much distance. I started buying both 1/8 and 1/4-ounce jigs and swapping over one from each. The heavier jig goes on the bottom and lightest on the top, distance problem solved!

For the silver spoons, I like to throw a 1/2-ounce Johnson Sprite or 3/4-ounce Tsunami Pro Slim Wave lure. The Slim Wave lure casts like a bullet and the thin silhouette has the appearance of a fast swimming bait. Spanish mackerel prefer a fast-moving lure near the surface, rigging them on 30- to 40-pound mono will reduce your chances of being cutting off.

Sometimes, if the fish are short striking at the lures, speed up the retrieve until you begin hooking up. Both fish have keen eyesight, this gives them less of a chance to look it over before closing the deal.

All this writing about calm seas, bait balls, fast fish and clear water gets me anxious. I’m very much looking forward to the calm weather opportunities ahead in August.