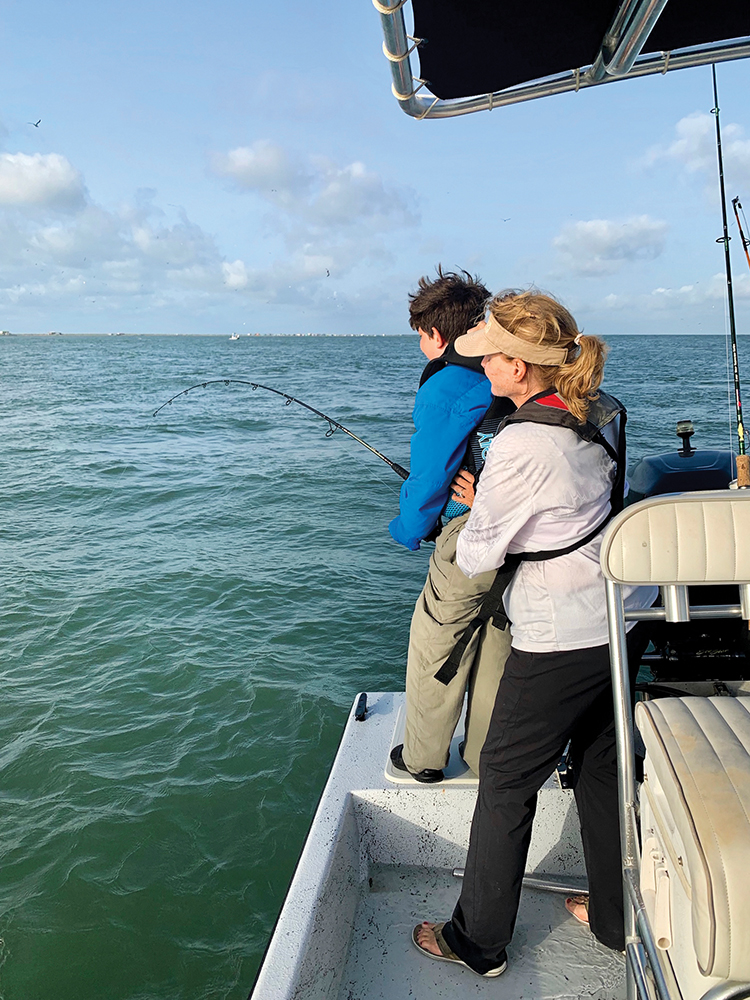 Keeping a grip on a youngster’s PFD is good insurance against being pulled overboard.

Texas summers are long and hot. Wading reefs and flats that were so productive earlier in the season lose their luster as the sun beats down unmercifully for days and weeks on end. One of the best cures for beating late-summer doldrums can be found in the surf zone, but the Gulf surf can be awfully fickle. Too many mornings I’ve set my sights on a surf trip, only to find the weatherman either flat-out lied or has no clue what we need for a good day out there. A 5 mph mistake in wind forecast can make the difference between game on and game over.

So, the surf’s muddy and rough. Now what? Turn the boat back toward Port O’Connor’s Matagorda Ship Channel jetties and have a blast jigging for bull redfish and jack crevalle. The action can be non-stop when you time it right, and the hard pulls from these brutes are some of the best fishing fun you could ever hope to find.

Actually, we often skip the trip out to check the surf when conditions are marginal and head straight to the jetties instead for a great family fishing trip. Youngsters and newbies of all ages thrill to the challenge of fighting fish that can literally rip the rod out of their hands.

New moon and full moon periods provide incredibly strong incoming tides that produce upwellings of current as the incoming flow races across undulating bottom structure. A variety of bait species caught in the upwellings become basically helpless as predators slash through the tightly-packed schools. It’s called a feeding frenzy and locating them can be as simple as keying on gulls and pelicans crash-diving above literally hundreds of bull redfish and jack crevalle. On a recent trip we witnessed jacks rocketing skyward with ribbonfish crosswise in their jaws like skinny harmonicas. Pitch a bucktail jig into the fracas and hold on for dear life!

As mentioned above, the best opportunity during summer months happens on the strongest of incoming tides. New moon and full moon periods deliver such flows and we typically motor into the middle of the channel at the inshore end of the rocks, and then let the current carry the boat toward Bird Island. Bait and gamefish busting the surface is a no-brainer; a good depth-finder can mark deep schools when nothing is happening topside.

Never take a knife to a gunfight, or so the saying goes. Tangling with bulls and jacks weighing 30-pounds-plus on tackle suited for speckled trout and slot redfish is a fool’s errand. Chances are you’ll have to crank the outboard and follow the fish to avoid getting spooled – even this is no guarantee. And, even if you manage to land the beast, the prolonged battle will likely render the fish too spent to accomplish a healthy release.

Tackle doesn’t have to be fancy or terribly expensive. We recommend Ambassadeur 7000 or similar levelwind reels paired with boat rods such as the 7-foot Medium-Power Tiger Stick. The Penn Slammer III 5500 paired with a 7-foot medium to heavy action rod makes a great spinning rig.

Line should be at least 30-lbs/test, monofilament or braid, with at least 250 yards packed on the reel. A trace of stout leader material helps prevent breakoffs and several feet of 100-lbs/test monofilament gets the job done.

You’ll see anglers pitching a variety of live and frozen baits out there but we prefer jigs. Spro’s Power Bucktails weighing 2- to 4-ounces are our hands down favorite. These jigs are very durable, cast like bullets, and sink like anvils when the fish are lower in the water column.

Pitching a bucktail into a frenzy almost always produces an instant hookup and the hook almost always lodges in the corner of the mouth, where it can be removed quickly and easily. When surface activity slows you can find fish by letting the lure sink to bottom and reeling up a few turns, and then jigging up and down as the boat drifts along. You want the lure close to bottom but not bumping. There’s lots of bottom clutter and hanging up is frustrating, not to mention expensive.

The greatest downside of natural baits is gut hooking that can kill a fish you would otherwise release unharmed. Circle hooks are the answer if you just have to throw bait.

Redfish of the size we are targeting are the backbone of the spawning biomass and every one of them is precious. Jackfish should be treated with the same respect. The trouble with jacks is that the darned things will fight to the death on tackle that is too light for the job.

A large landing net with a long handle is an absolute must-have. Do not try lifting them solely with a gripper device; you could tear their jaws. Fish should be handled as quickly and efficiently as possible. Remove the hooks and snap a quick photo, and get them back in the water.

We have learned the best and quickest revival technique is holding them in the water alongside the boat, with a gripper device (Boga Grip) on the lower jaw. Always hold them upright. Idling the boat forward with the fish in this position forces a greater amount of water through the gills than simply holding by the tail and sloshing back and forth. A few minutes is usually all it takes for the fish to recover and swim away in great shape. Failure to revive properly before releasing is pretty much a death sentence.

The Matagorda Ship Channel is deep – as in 65-feet and more, in places. And the currents can be incredible. I’ve seen many times when we made no headway with the boat idling in gear. You had to nudge the throttle to overcome the current. Any misstep that could land you overboard could mean your life…quicker than anybody could toss you a life vest. Large ships have the right of way at all times and their wakes are sometimes large as well. Give them a wide berth!

Certainly, all youngsters should wear a PFD at all times on the boat. You might want to consider an adult hanging onto their PFD while they fight a fish. We’ve gone as far as tethering the rod and reel to youngsters’ PFDs to prevent the fish stealing it. Inflatable PFDs are comfortable and good insurance for adult anglers.

Keep an eye on the boats fishing around you. Everybody wants to get in on the action and a dozen boats will sometimes be jockeying to get under the birds. Use your best boating etiquette and avoid cutting off other boats and running over their lines. Running your big outboard won’t scare fish in frenzy feeding mode or holding deep; but for Heaven’s sake be courteous and use commonsense. A typical day includes many chances to get in on the action, sometimes it’s better to wait your turn.

While “jetty jerking” may not sound appealing to light-tackle purists, don’t knock it until you’ve tried it. In all my years I have yet to find anything as exciting for young anglers and adults new to the sport than tangling with hard-fighting bulls and jacks. Bites are frequent and the action is often non-stop for the first couple hours of daylight. This is serious sport…even for grizzled old salts!