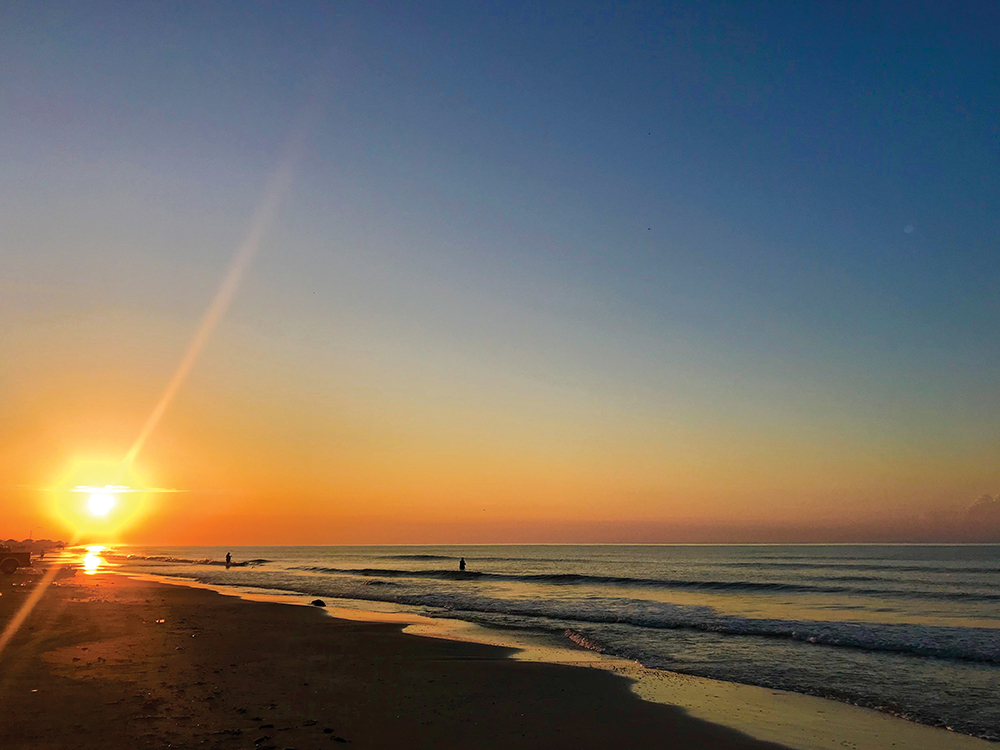 Fortunate for me growing up, my parents spent a significant amount of time with my brother and I at the beach. Any weekend that we were blessed with decent weather was a clear indication that we would be heading to the coast. As far back as I can remember, my brother and I would watch my dad throw a cast net to see if he could catch a few mullet to use as bait. He would then wade out in hopes of finding a few fish looking for an easy meal. Those day-trips would continue and would soon be replaced with Blaze and I throwing the cast nets to catch bait and all three of us would be standing waist-deep in the surf catching fish.

Fast forward to now and things have changed greatly from where I started. The early morning workouts of throwing a net have been replaced with a sturdy pair of wading shoes and a long walk. While the mullet we used for bait has been pushed to the side and my rods are now rigged with She Dogs and MirrOlures. One thing that has not changed is the love of standing in a calm surf and catching trout!

It is no secret that I spend a significant amount of my time targeting redfish. I thoroughly enjoy paddling the marsh for them. However, when the conditions get right, my internal switch flips and starts pointing towards wading for trout. The element that triggers my switch is when the wind changes directions and starts blowing out of the north for a few days; this is when the Gulf surf fishing gets right!

A little while back, I started my week like I typically do, sipping a strong cup of coffee while looking at the weather forecast for the following six days. To my surprise, the wind was switching out of the north midway through the week and this is when I saw my window. I made plans so I could leave directly from work and be in the surf for the afternoon bite. When I arrived I was greeted with light swells and the green water was starting to move in.

Easing into the water, I started off throwing a bone She Dog in hopes that a hungry trout wouldn’t be able to resist. I plugged away for a little over an hour with no luck. As the evening went on, I had a group of guys make their way out to join me. I noticed that every one of them had a MirrOlure tied on and it did not take them long to start reeling in trout. After watching them string up their tenth trout or so, I knew that I was not going to have much luck on my topwater; from my experience, when they want a MirrOlure, that is all that they want. And to top it all off, I know that I did not have any with me so I cut my day short. No worries though, I had enough time to run by Fishing Tackle Unlimited and pick up a few for the next day.

I knew that the weather and wind were going to hold up and remain constant, so I planned on being back at daylight the next day. I got on the phone and called a few buddies to see if they wanted to join me. My friend Doug was the only one able to meet me and I assured him that the trout are indeed there.

As we arrived, the Gulf was much calmer than the evening before and I just had a feeling that it was going to be a good day. We rigged up and I eased the kayak out and anchored it in the surf. Having the kayak out in the water makes for a very convenient base. You can put a drink cooler on there and it makes for a solid platform in case you need to do some type of rigging. It is also handy having an ice chest to put your fish in. Sure beats having a stringer trailing behind you while wading and attracting unwanted toothy critters.

Anyways, we made our way out and begin plugging away. We cast and cast and, again, zero luck. Remaining positive, I assured him once the tide started to move that it should turn on, just like the evening before. We kept grinding without a bite and after a few hours it seemed like it was not going to happen. Just before 9:00 AM we were joined by three older gentleman and the first one to reach us asked whether we’d been catching anything. I started to say, "We haven't had the first bi...." but could not finish as I received a solid thump before I could get it out. Rearing back to set the hook, I looked over at Doug and he was doing the same. Just like that, it was on!

Fighting those first fish, we compared thoughts and agreed that we were into some pretty solid specks. Mine came to hand first and while I was unhooking the 24-incher Doug looked over and commented, “Oh wow, that’s a big fish.” I got her measured against my rod and then let her swim away.

Meanwhile, Doug gets his in and luckily I had my GoPro on me. We weren't sure of the length but a quick check on the Boga Grip said she weighed 6.5 lbs. I got a few quick photos and we watched her swim off. That three minutes was well worth getting out of bed and the three hour grind without getting a bite.

We continued to fish and managed to put a few trout on the stringer. It was a beautiful morning to be plugging away in the surf. Here recently, the wind has been pretty relentless out of the south and has made surf fishing all but impossible. However, I know summer weather and it will change, sure enough. All we need is a few calm days or a couple of mornings with light north breeze to deliver a clean, calm surf. When that time comes, you can bet that is where I'll be!