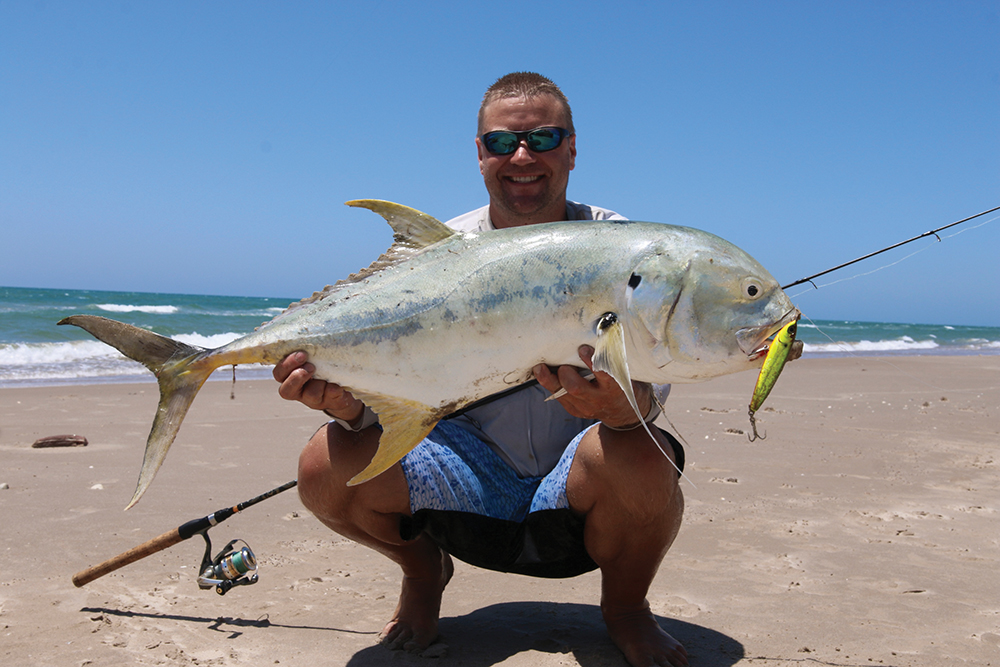 One of Oz’s favorite jackfish lures is a large, noisy surface plug. The more erratic and aggressive the presentation, the more likely a jack will smash it.

It all begins with the mullet run. As days grow shorter and water temperatures begin to decline, sexually mature specimens of many game and non-game species migrate to the Gulf of Mexico surf zone for their annual spawning rituals. The lowly striped mullet is one of these and November is one of the peak months – especially in the wake of the first strong cold fronts.

You can see them strung out all along the beaches, train upon train, numbering into the millions. In tow will be countless predators – redfish, Spanish mackerel, bluefish, jack crevalle, and even tarpon. Of all these it is the jack crevalle that peaks my excitement meter.

Commonly called jackfish, or simply jacks, jack crevalle have earned a reputation as some of the most voracious predators that prowl the surf zone. Pound for pound, these tuna-like speedsters are regarded as one of the strongest fighters in the sea. They run in squads of varying size and slice through schools of mullet pressured into shallow water with military precision. They swim with such speed and attack so vigorously that they can often be seen beaching themselves during pursuit of their food.

I am first and foremost a shark fisherman but jack crevalle have always commanded a special place in my heart – both for the incredible fight and the prized shark bait they provide. I absolutely love cruising the beach as the sun is breaking the horizon. The light penetrates the clear water of breaking waves and this is when you can see the jacks on the warpath. Sometimes you may see only one, other times a whole herd of jacks will be storming the waves chasing mullet.

There are many methods for catching jacks, my favorite is sight-casting with large lures. Incredibly fast swimmers, jacks feed mostly by sight, zeroing in on a particular target and engulfing it at top speed. Strikes are vicious, to say the least.

I have three favorite lure types in my jackfish arsenal. First would be spoons – the larger the better. The beauty of throwing large spoons is the casting distance you can achieve. While the jacks may be slamming bait right at the edge of the surf they might just as likely to be seen working the break along the second bar and beyond. Hence the emphasis on casting distance.

Next on the list are large swimbaits. A swimbait of four- to six inches mimics a swimming mullet almost perfectly. The rhythmic thumping and vibration of the bait along with the visual match for the jack’s favorite forage make them a sure bet.

Rounding out my jack arsenal is any large topwater or tuna popper. The more aggressive and erratic the surface action, the more aggressive the bite. Seeing a 30-pound jack blowing up on a surface plug can almost be likened to an atomic blast, sans the mushroom cloud.

Jacks are also suckers for live bait. While I certainly prefer the lure method for sport, the efficiency of live bait can never be denied. Ideally, you want larger mullet in the 6- to 10-inch class. Menhaden, whiting, and small skipjack are also effective. I prefer double-drop rigs (such as the Catch Sharks Jack Slammers). Using two baits at once means you’re still in the game should a toothy Spanish mackerel or redfish swipe one as soon as the rig is deployed.

Probably the best method for placing live bait on the hook is through the upper part of the eye socket. And while live bait is preferred, fresh dead will also work for jacks. Setting multiple rods in the morning and waiting for the jacks to come through is a good way to go, but be advised it can also lead to havoc if a herd swims through your lines and all the rods get hit at the same time. However, if you are trying to stock up on shark bait in the most efficient manner possible this is probably still the best way to go.

Sharkers love using jacks for bait for all the same reasons we find them quite unappealing on the dinner plate. Their flesh is tough, oily, and very bloody. Sharks, however, don’t seem to mind. In fact, some of the largest sharks ever landed from Texas beaches were taken on jackfish baits during November – great hammerheads and tigers. Also of note is that the only landings of mako sharks from Texas beaches were accomplished during periods of jackfish abundance in the surf.

Preparing a jackfish for shark bait traditionally included the use of rigging needles to thread leader drops bearing large J-hooks through the edges of the jack’s flesh. However, this method is no longer legal under the new regulations that allow only non-offset, non-stainless circle hooks.

This is a major change in Texas shark fishing. And while many anglers are unhappy there is nothing we can do about it. So, to solve the problem, we must learn new rigging methods. As reported in last month’s article I have been experimenting with rigging jacks for shark bait with circle hooks the past couple of years. While it is not efficient to “thread” the drops with circle hooks due to position of the hook gap, there are other ways. I have primarily been fishing big single circle hooks on my shark leaders but the learning curve wasn’t always easy.

The rule of thumb, on big baits especially, is to place the circle hook in the very end of the bait, making sure to leave plenty of gap exposed. Whether stingray chunks or mid-sized baits, I always rig at the end. However, a 30-pound jackfish is not a mid-sized bait. While I know an individual who ran whole jacks with a single circle hook in the back of the jack and had success on large giant sharks, that typically won't work for your average Texas shark.

For big jacks, I like quartering them or cutting into thirds and placing the circle in the end. I have caught hammers, big bulls, tigers, and large duskys all with this method. Just remember that the sharks are cruising the surf to eat jackfish, so we must learn new techniques in rigging to be able to use the bait the shark is mostly likely to eat.

While late fall is not the only time of year to get into jackfish action in the surf, there are days when it surpasses all other seasons. Jack can be so thick in November that I have witnessed dozens from a large school beaching themselves when they pushed bait to the water’s edge. While I've caught jacks from piers, jetties, offshore, and from a kayak, there is perhaps no more enjoyable way to catch these awesome fish than surf angling.

Jackfish are a wonderful blessing to Texas anglers, and even if they are not classified as gamefish they still deserve our respect and appreciation as one the gulf's greatest predators.