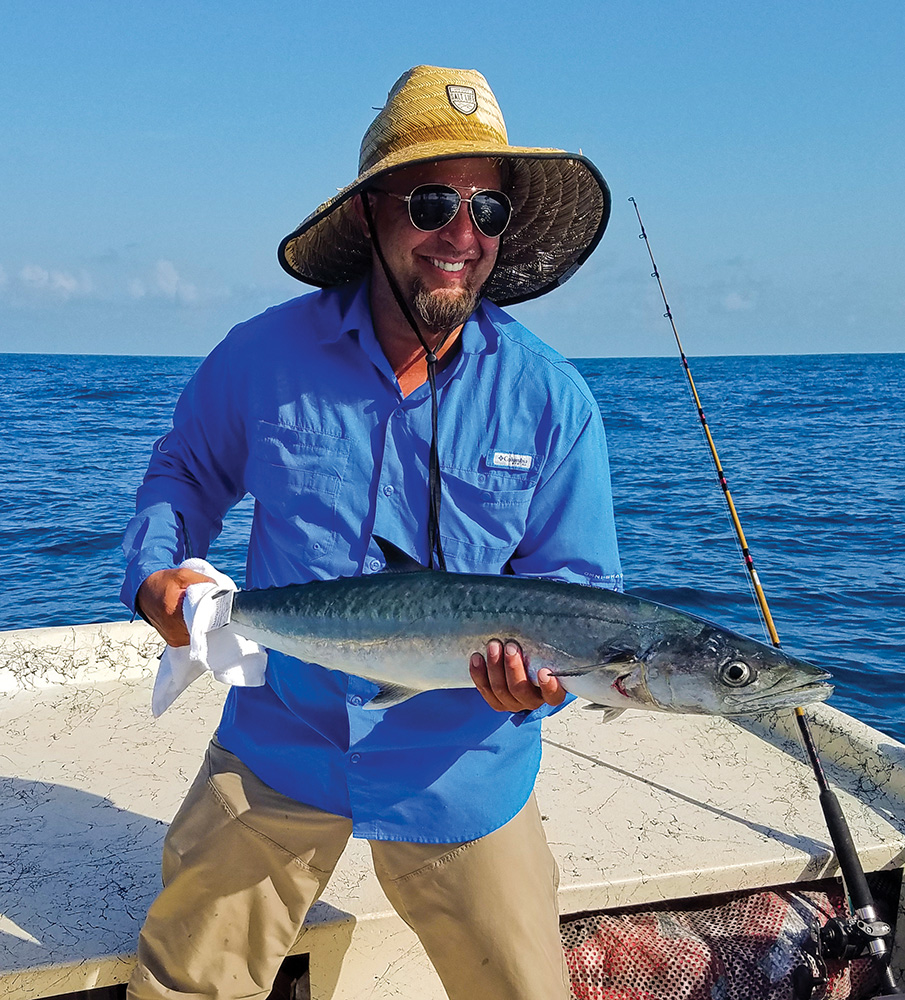 Christopher Flores caught his limit of nice eating-size kings, and a 58-pound cobia!

Every season must come to an end and the summer of 2018 will definitely be missed. We were blessed with phenomenal catches this year of kingfish, cobia, tarpon, dolphin, red snapper, and trout.

The extended red snapper season was a definite boon to our coastal economies. Good weather conditions coincided with weekends making for more enjoyable offshore trips. I noticed much more activity throughout the summer instead of concentrated effort during a shorter snapper season. The extended federal season may have decreased the effort targeting nearshore snapper. I expect above average state water snapper catches over the cooler months.

The kingfish and cobia were very cooperative this season. Most nearshore trips yielded cobia and always large quantities of kingfish. It was the norm to have king limits and/or release many. Most of the kings were of good table fare, under 15-pounds, and cobia were 38-44 inches mostly. We did have some larger kings in the upper 30s to 40-pounds, and cobia in the 50-pound class. One cobia when weighed was the CCA STAR Tournament first runner-up. It tipped the POC Fishing Center registered scale at 70-lb 13-oz.

Summer is on the way out and fall is quickly approaching. The decreasing daylight hours, cooler water temperatures, and light frontal passages all signal the change. Winds become variable and humidity drops once the light cool fronts start their coastal approaches. And the fish begin fattening up!

Concentrations of fish, large and small start the move, migrating toward the warmer waters of the Gulf. Baitfish and gamefish move toward the jetties and passes leading out of the bays. Many times schools of each stage at these exiting channels waiting for a signal, a push or primal instinct telling them to leave the bay systems. Until they are signaled, they feed heavily in these staging areas.

The mullet run will be kicking off this month, just as it does every year. The predator fish sense this as well. As the mullet schools congregate you can look to many of the local hotspots to find them. Many mornings I let my nose tell me where to fish, often the smell of big schools are strong in the air. Look to channel edges, rock groins, passes, water bodies intersecting the ICW, windward shorelines and water body drains for schools.

Redfish once again start schooling early in the month on bay shorelines. Groups of different sized fish mix to form a ravenous traveling mass. As the reds move toward the gulf they gain momentum and become very predictable targets. Wave after wave of fish concentrate where the food source is stacked up, close to the gulf.

When targeting schooling reds I like to use the most readily available bait in the area. This time of the year mullet will get the most orders from the menu. A castnet is the best way to procure fresh bait. Some days fresh cut bait may out-fish a lively bait, so mixing up the offerings can increase catches.

Spreading some chunks of chum in the intended fishing area definitely helps. Cutting up fresh mullet is good, but Spanish sardines and menhaden really get their attention. The oils in these fish travel much farther in the current bringing fish to you from a longer distance.

September is an excellent month to fish shallow wrecks, reefs and submerged wellhead obstructions. These types of structure really come to life with the fish in transition.

With the majority of state water depths of 70’ or less most bottom structure will host a variety of species. Red snapper, mangrove snapper, kingfish, Spanish mackerel, shark, cobia and bonito are all available. Larger red snapper start migrating into state waters and mangrove snappers will school up in the 40’ depth range, peaking around the full moon.

As the month ages the nearshore structures really heat up. Upper-slot reds and black drum invade from inshore and sheepshead gather, getting ready for an inshore return. Bluefish schools are more prevalent and the ever-present spadefish are more apt to bite a baited hook.

Dusky anchovies are hitting their peak numbers and will form massive bait shoals this month. Most nearshore fish adore the anchovies and gorge on the schools. Look for terns diving or for bonito birds hopping across the surface to giveaway the anchovies location.

I’ve seen very large sharks, kingfish, Spanish mackerel, bonito, bull reds, cobia, jack crevalle and tarpon gorging simultaneously within the same bait shoal. For the larger fish, a fresh dead or live mullet, pinfish, or menhaden gets guaranteed attention. With one cast being a 10lb kingfish and the next being a 100lb blacktip. Steel leaders get the most fish to the boat but 100lb and larger mono leaders work well, too.

Smaller fish like Spanish mackerel and bonito can be caught readily on 1/8-ounce speck rigs with pink and bright orange colors getting the most bites. The same spoons we normally throw for them in the summer work just great for fall.

The end of summer and beginning of fall make for some of the best times to get on the water. Now is the time for excellent catching opportunities, comfortable weather, and reduced fishing pressure. Come join us on the coast if you can, I think you’ll like what’s going on down here.