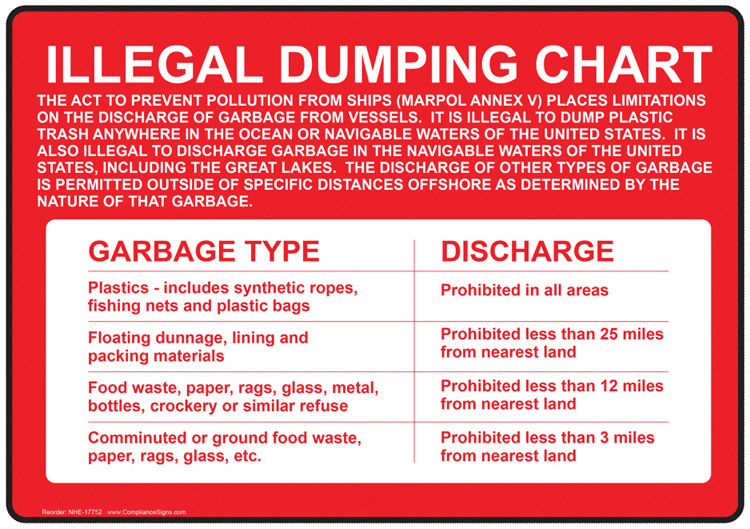 More than likely, you do not have to go very far nowadays to get an eyeful of trash. It seems to be anywhere humans tread, with highways and waterways being equally shamed. There may be just as many types of polluters involved as there are varieties of trash.

Plastics are the most common. Light and buoyant, plastics degrade slowly and persists for years while traveling with the currents. Accumulations can be seen in large rafts that wash upon shorelines far away and close to home.

The disposal of any plastic is illegal in the waters of the United States. Within three miles of the coastline and all navigable waters contained therein, it is illegal to dispose of any garbage. Some items, depending on the composition, may be disposed of at sea, but the regulations and guidelines are very strict.

Litter in the waterways comes from many sources, some local and some from thousands of miles away. Likely polluters might include oceangoing freighters, fishing vessels, or even city streets washing into storm drains. Natural disasters also contribute to the problem. River flooding and hurricanes are known to spread refuse far and wide, eventually settling in coastal waterways.

Hurricane Ike in 2008 displaced mountains of general household contents and trash into the Gulf of Mexico and adjacent bay systems. Ike hammered Galveston and nearby communities with tidal surges that towered to twenty-two as far away as Sabine Pass. For many months commercial salvage operators and local volunteers cleaned shorelines and removed water hazards by the thousands of tons. Much of the debris made it into the gulf to ride the south-flowing currents. Some mixed into the offshore waters, headed to deeper graves. A large amount stranded upon the beaches of Padre Island National Seashore.

Here in Port O’Connor, I know of three bay boats that rode the tide into Matagorda Bay and were beached. Resin yard chairs, plastic children’s toys, plastic dinner ware and suitcases floated in through Pass Cavallo. Large items like household garbage dumpsters, foundered boats, refrigerators and even a “monster” pickup truck with massive tires floated upside down just outside the surf line. For several years there was an object that I assume was a square-bodied utility vehicle resting on bottom at about fourteen feet, not far outside the breakers of Pass Cavallo. It was a hotspot for bull reds year ‘round.

Gulf shrimp boat trash- We are fortunate here in Texas that the gulf is rich with shrimp. Less fortunate though, that many of the commercial boats targeting them are careless. I am not saying all, but a majority simply toss their non-biodegradable garbage overboard.

Flotsam trailing the fleets includes plastic bags, egg cartons, milk jugs, Styrofoam plates and 40-lb brine salt bags. The worst may be the 1-litre green bleach bottles. You can find these scattered all over gulf beaches and quite often they are covered with small triangular cuts. These cuts come from the beaks of turtles. Young sea turtles often mistake them for jellyfish, a mainstay of their diet. Their digestive system is not ideally designed to pass the sharp pieces from mouth to vent.

Helium balloons- Take your pick of big ones, little ones, and bundled bouquets of Mylar. I despise them all. Releasing lighter-than-air blobs of trash that are guaranteed to come down eventually, possibly hundreds of miles away – how disrespectful of the environment? Fish and turtles become entangled and try to eat them, but cannot digest them. Birds get tangled in them. Not to mention the trashy things hanging from fences, powerlines and trees.

I see balloons in the bay, and more often in the gulf. February, June and October are the worst months. Valentine’s Day, graduations and weddings, and football games in the fall are contributors. Please, just say no to balloon releases.

Uncaring fisherman- I’m not saying that all boat or shoreside fisherman are trashy. Some of the shoreline trash we see rides the tide from other sources. But, all too often, if you venture to popular public-access fishing areas you find litter left by fishermen: aluminum cans, tackle packaging, plastic bags, fishing line, food wrappers, etc. One of the golden rules of outdoor recreation is pack out what you pack in. Better yet, leave the area better than you found it. A few minutes is all it takes to collect a bag of litter left by irresponsible people.

HOW TO MAKE A DIFFERENCE

Public education and awareness programs are always a welcomed form of prevention. All up and down the coast there are volunteer cleanups. Many of the events are localized and do not receive much-needed media promotion. Check with the Chamber of Commerce in coastal areas for information.

The Friends of Padre Billy Sandifer Big Shell Beach Cleanup is held annually the last Saturday of February. This cleanup is a true grassroots event that Billy started with a group of friends in 1995. Since then, 7350 volunteers have removed over 2.5 million pounds of trash. This event is a shining example of Texans taking care of Texas.

The Texas General Land Office has a very successful Adopt A Beach cleanup program. These events are held statewide, with more than thirty cleanup sites. Dates may vary so check with www.texasadoptabeach.org for current cleanup dates.

I know personally how difficult it is organize and operate a cleanup event. For this reason I am very excited about a new program available. H-E-B Food Stores has recently partnered with the Keep Texas Beautiful organization. The Keep Texas Waterways Clean program provides support and supplies for waterway cleanups across Texas. This program is open to all communities located within thirty miles of an H-E-B or Central Market store location. Go to www.ktb.org for additional information.

You do not have to join an organized event to make a difference. Take a little extra trash back with you next time you visit the coast. All it takes is a tiny bit of your time to set a good example. Like they say; “Monkey see monkey do!”