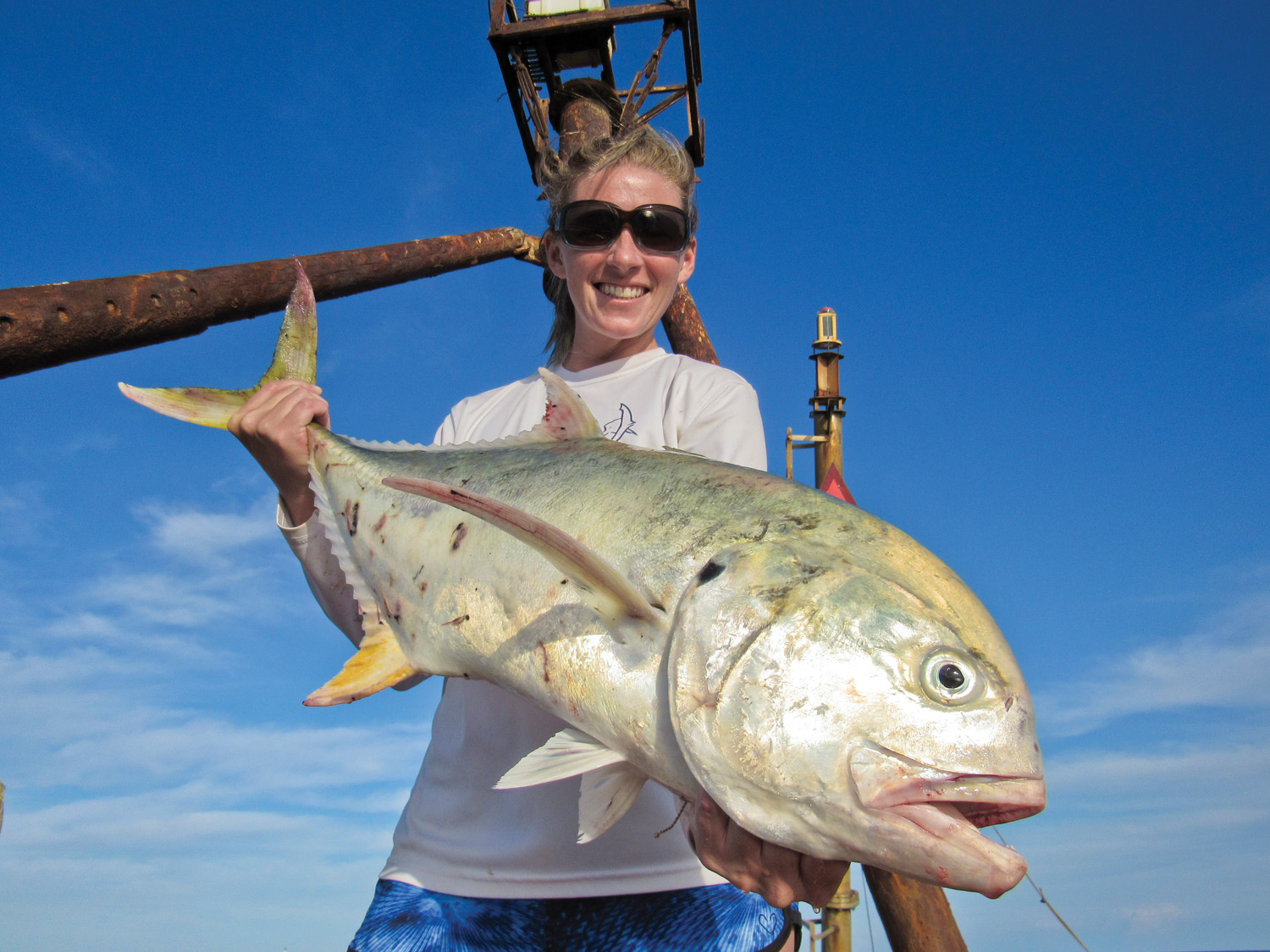 Alexis Anthony adds another jack to our shark bait inventory.

A life of dangerous shark fishing solidifies your soul into a salty crystal of adrenaline and late-season fish frenzies are definitely my kryptonite. When baitfish migrate and predators follow, there is no place like the action-packed surf of South Texas beaches. The final month of 2017 has thus far been one for the books.

As December rolled in we had record high water temperatures keeping things very active. The mullet migration we feared might never happen following the hurricane eventually became a lingering trickle that produced a protracted aggregation of predators staging near passes and channels leading to the Gulf of Mexico. Spanish mackerel, bluefish, and skipjack were raiding the shallows by the millions. Juvenile blacktips, more typical of October, were on the warpath eating anything and everything in sight. Even more amazing was a very unusual abundance of common snook, an anomaly that may well prove to be an enigma for the ages.

A more typical scenario would have the mullet migration starting in late-September and early-October along the Upper Texas Coast. Tarpon tag along with the abundant forage species of mullet and menhaden and “ride” the cold fronts south toward warmer climes. Come November, the tarpon and jackfish are usually camped around the Port Mansfield East Cut and Boca Chica jetties, partaking of the bounty until arctic fronts push them on down into Mexican waters for a few months.

However, due to the extreme Indian Summer conditions, it was difficult to target large sharks from the surf with the abundance of pup sharks hanging around, messing with our baits in the nursery-like water conditions. Jack crevalle made a rather lackluster showing in the surf, never showing in full force, stalling near the passes instead where the bait was most prevalent.

Yet another wacky development involved the sandbar sharks. While these robust, bigger cousins of the blacktips are our staple wintertime shark species, they showed up nearly two months early in late-October. Federally protected, sandbars feed heavily on drum, sheepshead, pompano, and whiting in the surf. Perhaps they were drawn in early via the large array of bait and predators present, with many staging uncharacteristically near passes.

Landing common snook AND sandbars in the same day is something you just don't hear of... and we did this on multiple occasions!

While the surf held an extraordinary abundance of smaller gamefish, it was just really tough to target the larger specimens and we changed our game plan. In late-November, I relocated my focus to the various jetties.

Jetty fishing is often more of an art than a science and can be stressful at times. It is often recommended that you have ninja-like agility to take full advantage of fishing the obtuse granite blocks and hazards they present. We started at Packery Channel where the fish were already stacked up. Oversized red drum were thick and feeding on mullet headed to the gulf. Swimbaits and other lures worked well while spoons drew Spanish mackerel strikes and the occasional rogue king mackerel.

Despite the steady action with the species mentioned at Packery, tarpon and other large gamefish were simply not present. After a couple days I decided to relocate further south to the Port Mansfield East Cut jetties. This remote and very isolated structure is a fish haven at times and, when things are really going off, you can witness National Geographic quality material in its rawest form.

A few local groups of fine fishermen had also taken note of the Mansfield jetty action and we worked together, sharing information several times during the course of a few weeks. There were days when the jack crevalle were pounding anything you threw in the water, while other times behemoth red drum and tarpon would fight over your bait. The snook action was uncanny. Over the past sixteen years of living and fishing the Texas coast, I have never seen our snook fishery so healthy and dominant. Some days I would catch as many as 15 solid snook from both the surf and jetties. My personal theory on the great presence of snook is that they may have been relocated out of the bays and filtered into the gulf during Hurricane Harvey and the subsequent flooding. It is hard to say if this anomaly will repeat and stick around for the future but, regardless, it was amazing to experience it while it lasted.

Approaching mid-December we have yet to experience any really significant cold fronts. Tarpon would become very active during and right after any front while the north winds ravaged the surf. You could see them rolling in the channel and chasing anything they could swallow. Walter, a rock-hopping buddy, managed to land four quality tarpon in a single outing duking it out right after a cold front in less than comfortable weather conditions. As soon as the wind would die and switch back from the south, the jackfish would dominate aggressively, again. Since the surf could not provide consistent jack action, the jetties allowed me to stock up on these prime shark baits. Several days I lugged as many as ten jacks the length of the jetties. It was a lot of work but quite worth it when trying to obtain and stock up on the best big-shark bait on the planet.

Of all the chaotic outings I conducted on the rocks recently, several will resonate forever. Perhaps the most surreal was that of a mind-blowing feeding frenzy that developed just before sunset of a calm evening. I and a couple others were throwing lures while three fly anglers stood by vigilantly, awaiting a casting opportunity.

A couple hundred yards off the end of the jetties we saw a mass of boiling water pushing toward the rocks. Large splashes amid the melee foretold of sizeable fish. As the mayhem grew closer, it also grew in size and scale, covering several acres at the base of the jetty. Thousands of oversized red drum, jack crevalle, tarpon, and sharks were destroying anything that moved. An unorganized display of teamwork showed as six “jetty goats” maneuvered around and over each other fighting and landing fish. While I have witnessed some intense feeding frenzies, this display beat all I’ve ever seen. The carnage that played at our feet was indelibly burned into our memories. What a way to close out 2017!