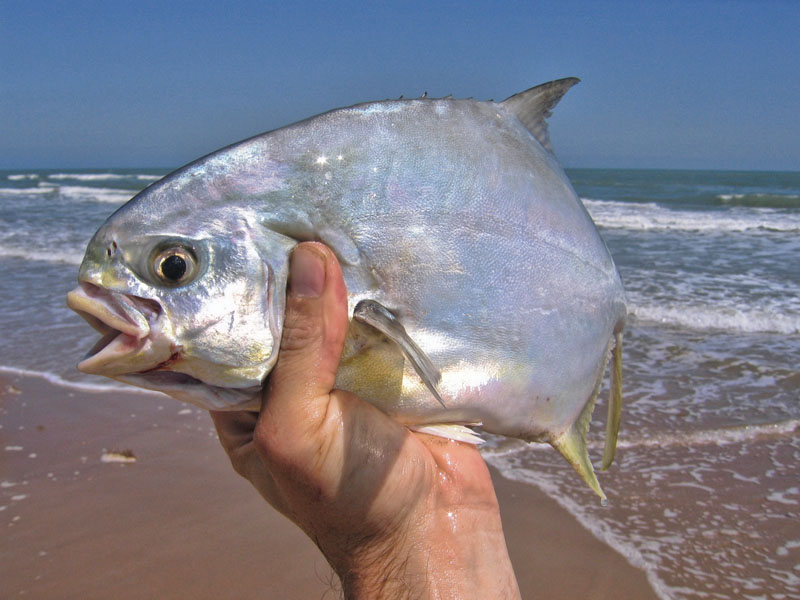 Winter-surf pompano; one of the finest table fare species you will ever catch.

Upon heavy reflection it is hard to imagine the possibility of matching or exceeding the fishing quality we experienced in the surf during 2015. Having endured all that the beach could deliver during my adult life, last year was the first time we had gone around the entire calendar without hardly a speck of sargassum seaweed washing ashore. No seaweed meant more fishing time on the sand and crowded beaches with eager anglers. Monumental catches were made and prized shark species were available in the greatest numbers our coast has seen in perhaps decades. We battled extensive rain, cold-water upwellings, and a major red tide event. Despite all this, the year still shaped up to be one of the best on record in South Texas. I personally caught and released some of the largest bull sharks I've ever seen. In addition, we put four tiger sharks on the beach (two personal, two for charter clients). Overall, action was nothing short of phenomenal. As we move into this New Year, the question is whether the momentum will continue.

In short, only Mother Nature can dictate that answer. Like last year, the long-range forecast calls for another wet and cold winter but only time can truly tell. If it turns out to be harsh (by Texas standards) it will drive down the water temps pushing fish further offshore to the warmth of deeper water. However, if conditions remain moderate, bluebird days can produce spectacular results. I am expecting a bountiful winter season full of pompano and feisty sandbar sharks.

While very little good ever comes from a catastrophic red tide event, there is a slightly positive note left in the wake of one for winter anglers. As with this last event, a large population of hardhead catfish and whiting met an unfortunate demise. A large die-off of these species usually leads to phenomenal winter pompano fishing as there is less competition for your bait. Pompano are one of the best tasting fish in our inshore waters and you can likely expect some banner days this season. Black drum should also be very plentiful.

Moving on to larger predatory species, the surf water temps will determine the species of sharks present. During previously moderate and warm winters we've enjoyed days of amazing blacktip action, lots of mature females. The always pesky Atlantic sharpnose can also provide thrills on light tackle. What I look forward to most is the exciting action of the sandbar shark. Sandbars are not to be mistaken with "sand shark" a term that is often mistakenly applied to a range of smaller sharks, including the sharpnose.

Sandbar sharks are the real deal with a robust body, large head, menacingly large teeth and bad temperament to boot. Imagine a blacktip on steroids. At times these sharks (pushing 7-1/2 feet) will leap wildly when hooked. Like all sharks, sandbars command respect when brought to the beach as they are usually very aggressive during handling. And, the big bonus if conditions are just right; it is only a matter of time before another beach mako is landed.

The big question that looms is what is to become of our sargassum seaweed. During 2015 we dodged the vast majority of it as it washed ashore around the Caribbean and Yucatan Peninsula. The sheer volume of sargassum in our oceans has not changed much, but it is the cycle of currents that deliver this nuisance to its final destination. Truth of the matter is that nobody can accurately predict how much sargassum we will have to deal with, neither will we fully understand the role El Nino will play until the time comes. When springtime arrives we will either get a strong wave of the menacing seaweed, OR we could enjoy another clear year. For angling purposes, let's hope for the latter. As with the previous spring, it is also very possible we might see another large number of hammerheads. Both the scalloped and greater hammerheads were more plentiful in the South Texas surf than seen in a very long time. Also, if conditions allow, we may be in for another great year of giant Texas bull sharks.

Another big question for 2016 is the tropical weather pattern. The Pacific was stuck in a strong El Nino pattern, which in turn had a huge effect on us. We have been lucky as of the last couple of years to dodge any major storms. The number of storms in the Gulf of Mexico has been at an all-time low, thankfully. Avoiding major storms and sargassum should set the stage for a repeat of 2015's productive beach angling. Many big bulls and tigers were caught along with killer kayak action for a variety of species beyond the breakers.

It will be interesting to see how and when the speckled trout bite materializes. Some years the trout are available in good numbers and other years they are quite hard to target. As always, some surf anomalies can happen such as giant "smoker" king mackerel from the sand which happened on one of my charters, or another surprise cobia that picked up a kayaked shark bait. The allure of surf fishing is the wide variety of species and the unknowns keep us coming back.

I have a sizeable list of goals for the coming year. Some are likely to be achieved while others would probably be better classified as dreams. Whether it happens in the next couple of months or next December, I would love to tangle with another surf mako. The chances are slim and several variables would have to align. If the window appears I have a proven strategy to help better my odds. I would also like to break 12-foot mark on a tiger shark. We wound up with a pair that measured 10'-8" and 11'-9" on a charter in 2015 and I rate these as incredible feats.

I was fortunate to provide some very exceptional trips for clients and hope 2016 might even exceed those. When conditions accommodate the surf fishermen, it really makes my life easier and my customers happy beyond belief. Regardless of what the conditions turn out to be, one thing is certain, I will be spending countless days on the sands of Padre Island and beyond searching for the biggest of the ocean's apex predators. I will be keeping you updated... Happy New Year!