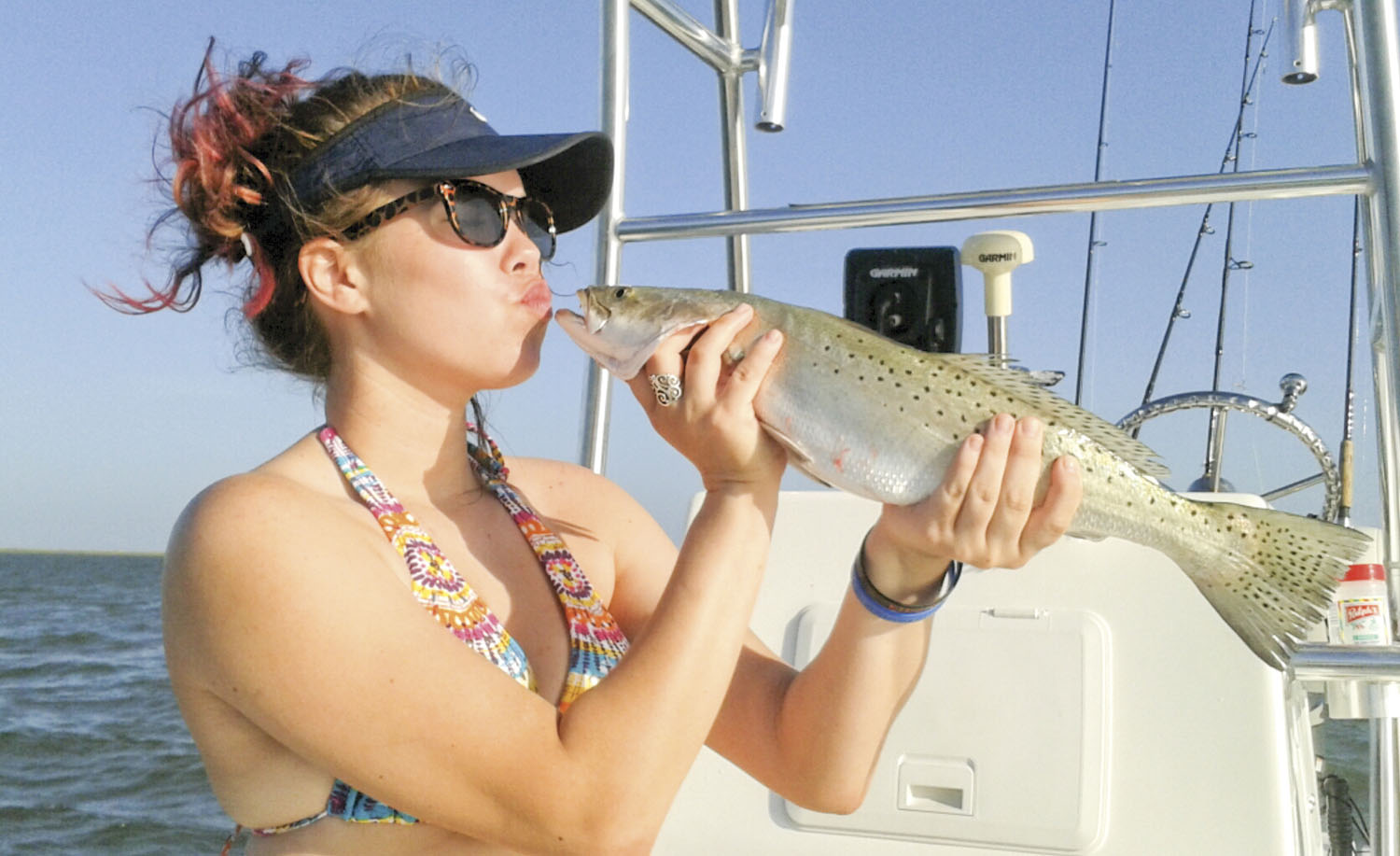 Some people get so excited over catching trout…they want to kiss them!

Whew! I am so glad to have July and August in the rearview and cooler weather ahead. It has been a hot one for sure and I don't think it is only because I'm getting older. The high temps have been dissolving my Gulp baits right in the bag, contorting topwater lures left in the sun, and melting ice in the coolers faster than it can be replenished. More comfortable days are not far away; that's what I keep telling myself anyway.

I've always challenged myself by targeting the other guys species other than speckled trout. This became especially necessary through a string of several tough drought years when the summertime trout bite became dodgy at best around Port O'Connor.

This summer's trout rebound has been most welcome and we have definitely taken advantage with hope that it will continue into the fall months. Everyone enjoys the steady action and lots of folks seem to be catching them.

I can really see where this 5-fish limit will benefit the resource. Many times we could have sat on the fish and easily reached 10 per angler without much effort. Five trout in the two-and-a-half-pound range makes a good mess of fillets. Throw in a couple of reds or drum and it's a family feast.

Many days will begin by riding the incoming tide, drifting for bull reds and jacks. Slower tides will find us pitching bait on a flooding ledge for slot reds and maybe a couple of trout. We work each tide until the momentum wears down and the water temperature rises. Once the air temperature turns to broil and the tide goes slack it is time to make a move.

We cool off and regroup by jamming the throttle down and making our own breeze. Another species comes into focus when the boat settles off plane. Our path now leads us to schools of black drum that have an increased appetite during the change of tide. Many times these slow-moving zombies awake from their stupor for a midday snack. The change in water movement alerts them to reposition for their ride into the next tidal flow.

Once the drum bite slows and the wind picks up we move off in search of reds on the falling tide. We anchor off windward shorelines or flats near deeper water. Sand pockets and points at the leading edge of coves always promise a few more bites.

Our travels across the bay often bring us upon roving schools of jack crevalle. These bruisers of the bay are great fun to catch-and-release on tackle of appropriate size. They can be found in numerous areas from deep, open water to shallow shorelines. Their near constant roaming and changing of location daily keeps this hunt very interesting. The ferocity a school of jacks can display as they compete to inhale a rapidly moving topwater is phenomenal.

September is one of the most significant transition months for gamefish on the Texas coast. The decreasing hours of daylight, cooler water temperatures and light frontal passages all contribute.

Concentrations of several species begin to migrate toward the warmer waters of the gulf. Baitfish and gamefish alike move toward the jetties and passes leading out of the bays. Many times schools of each stage along these channels waiting for a signal, maybe a primal instinct, telling them to leave the bay systems. Until they are signaled, they feed heavily in staging areas.

The same pattern evolves in fish that inhabit nearshore gulf waters, they too school up and make ready for a move to a warmer climate. Glass minnows, mullet and dusky anchovies pull together in tight schools for safety. These schools are formed for protection in numbers, but at the same time allow for easy detection and interception by predators.

As the month matures, the seasonally migratory species head toward warmer waters, either farther offshore or further south along the beach. You can expect Spanish mackerel, little tunny, mangrove snapper, ladyfish, jack crevalle, shark and tarpon will all be on the move.

Like I always say, "Find the current, find the bait, find the fish." It is basically that simple. Find areas that the current concentrates the bait by pulling or pushing them into a channel or against a shoal. When the bait stacks up in these areas the predators have a much easier time locating and feeding on them.

Early in the month redfish will start schooling along bay shorelines. Groups of fish will come together to form a ravenous traveling mass. As the reds move toward the gulf they grow in numbers and become very predictable targets for anglers. Wave after wave of fish concentrate where the food source is stacked the thickest close to the gulf passes.

When targeting schooling reds I prefer to use the bait that is available in greatest abundance in the area. This time of the year mullet will get the most orders from the menu. A cast net is the surest and most cost effective means by which to procure fresh bait. There will be days when freshly cut bait may produce more takes than live swimmers, so mixing up the offerings can increase the odds of catching.

Broadcasting chunks of chum within the fishing area definitely helps. Fresh mullet makes good chum but Spanish sardines and menhaden really get their attention. The strongly scented oils in these fish travel much farther in the current, therefore attracting fish from a greater distance.

Ideally, you would like the reds to swim into the current following the scent trail. In water less than five or six feet I cast baits down-current and as far away from the boat as possible. The chum is then tossed out between the boat and the bait. If all works according to plan the redfish find your baits before filling up on chum.

In deeper water, around jetties and ship channels, the chum line can be more difficult to manage. I try to throw the chum up-current from the boat in hope that it will settle to bottom, still up-current of my baits. Depending upon the depth of the water and strength of current this can require some trial and error to learn where to distribute it to land in an effective placement. I begin by tossing a few chunks next to the boat where I can observe the sink rate and then guess the distance it should be thrown so that it will settle where I want it. It's never an exact science, different every day, and sometimes minute by minute as tidal currents ebb and flow.

However you prefer to catch redfish, September is for certain the best time for slot-sized specimens. The summertime heat and crowds have come and gone as fall arrives. The fish seem to perk up from effects of the cooling water and air temperatures. It's funny how comforting a few degrees change in temperature can be. I perk up a lot in September, just like the fish.

Hope to see you at the coast!