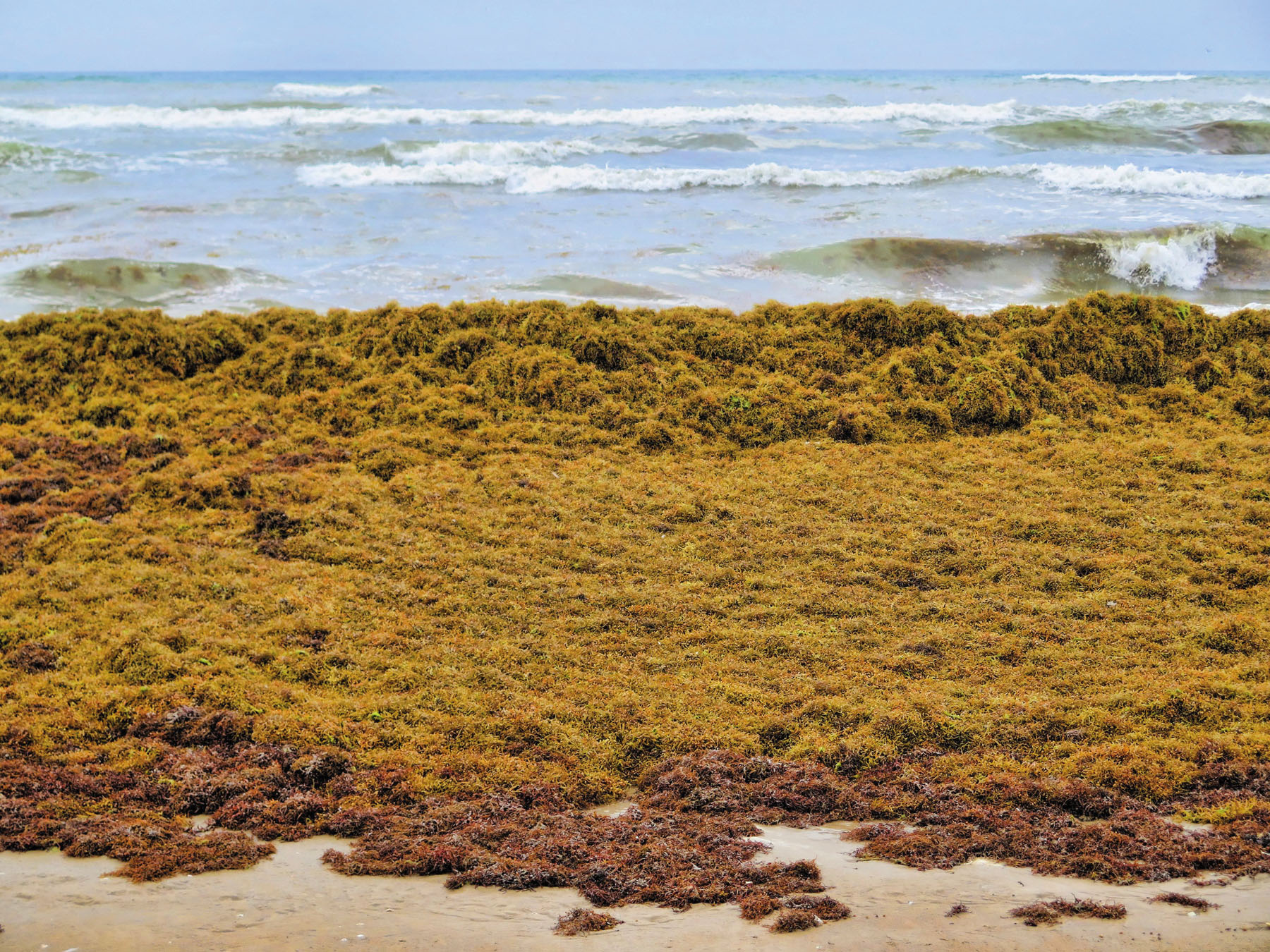 Sargassum can be wicked bad on PINS at times. Even the most determined surf anglers will retreat to a jetty or ship channel when sargassum mats the size of football fields begin arriving on the beach.
After hours of anticipation and the skillful preparation and rigging of large juicy shark baits, deployment is finally underway. The light of day slowly fades and "tiger time" is upon us. Late spring and early summer are by far my favorite times of year for big shark species, and on nights like this large sharks typically prowl the surf for an easy meal. During ambient twilight we are also greeted by the rise of the seemingly tribal full moon. Come darkness, I have successfully kayaked out four ridiculously large baits, each staggered several hundred yards off the beach. Deployment technique and execution are about as perfect as it gets. The darkness brings excitement, and yet a certain shroud of mystery begins to blanket the atmosphere as with most shark-fishing nights. All is looking good as the lines stay true and tight. This could very well be the night of sea monsters!

As a great meal and relaxation overtakes the camp, a reel begins to release drag. Excitement grows instantly thick. And then silence. With eyes glued to the rod we summon restraint but patience is in short supply. Then unexpectedly, another reel begins to release drag... then another. A spotlight helps illuminate the lines as they travel down at a distance over the breakers. Faintly, I see something dancing around just beyond my view. I then detect movement amongst the lines actually, it is on the lines. Suddenly, there it is, creeping closer with each breaking wave. Now it is draping over all the lines, the most hideous and terrifying sea monster of all time is attacking the beach it's sargassum weed!

I have lived this dreadful scene many times, usually in the first half of the year. Once the sargassum hits, all is but lost and you are simply doomed. Here in Texas, sargassum and strong winds are stuff nightmares are made of for surf shark fishermen. The unique makeup of this floating weed with clumpy strands and bead-like air bladders make it stick to fishing line like Velcro. Our strong currents and crashing surf will throw this weed into the lines pulling weights free, or worse, breaking them due to loading beyond rated strength. It can be manageable in small doses, but it requires some maintenance. However, when mats the size of football fields roll in you're toast and you must relocate. At times you can drive a few miles and get away from it and other times it will cover a 100 miles of coastline. This is an annihilating obstacle and is not present on many beaches in the amount we see it anywhere else in the world.

During this part of the year we have a superb inshore fishery and much of it is due ironically to this hindering weed. It protects our stocks from overfishing - perhaps months at a time. It brings in an array of plankton, crustaceans, and small fish that fit perfectly into the marine food chain. And, in response to this, many predatory species are present when the weed is at its worst, including huge bull sharks dropping their pups. Tiger sharks hunt turtles that congregate in the mats while hammerheads feed on stingrays. Talking to senior members of the beach fraternity, they swear the sargassum was never as menacing in their memory as it is now. Like it or not, it is a part of nature coastal anglers have to deal with and our only option is learning to deal with it.

Predicting the amount of sargassum that will arrive on our beaches is a guess at best. Some years it might be nearly non-existent, others can be quite severe, like we have seen so far in 2014. There are a few hardcore anglers that will battle the punishing conditions at a chance for large gamefish. Often, the effort put in will eventually reward you with a nice catch. You cannot fish during all sargassum situations but if the current, wind and surf conditions are moderate there may be some hope.

The cardinal rule of fishing weed is to make sure your lines are placed far up current, and usually at an angle. Braided line is highly recommended due to limited stretching. Braid is also known to "cut" through the weed like a laser. In theory, if your lines are set tight, the current and ultimately the wind will push the weed up the line to where you can physically shake it off. Depending on how severe the weed really is, this can be a tedious and tiring process. Nonetheless, the longer you are able to keep baits out, the better your chances of a fish picking up a bait.

When there is not a single stretch of beach without weed available, jetties and passes can provide a viable option. Examples would be the Port Aransas or Port Mansfield jetties. Fishing the wind protected area of the jetties will usually allow you to keep baits out for longer periods. If the conditions are still menacing, then try the actual channels. In regards to sharks, they (bulls) travel far up the channels and waterways. The Port Aransas ship channel is the most under-fished shark location in Texas. Even miles inland you can have nightly activity. Any deep coastal pass with good water movement is a beacon for sharks and other big-game. Most of these locations will see the majority of action during nighttime hours.

There is still much unknown about sargassum. While thought to originate in the Atlantic's Sargasso Sea, this organism thrives very well in our warm waters. Fortunately, our winds and currents mainly allow the weed to affect us for only a few months out of the year. Scholars try to relate the reasoning behind its hit or miss activity and yearly impacts in our waters with inconclusive results. One thing is certain - anglers like me will continue to wage war on this macro-algae.

My quest for beach sharks will not be halted at the first sign of weed. Adapting to this nuisance is another way our coastal anglers overcome challenges, making us some of the greatest saltwater fishermen on the planet. It is also important to note that biologically sargassum is not a terrible thing. It is an important biomass of life supporting a countless variety of organisms which in return provides food and nourishment to our fishery. The success on your next surf trip may be determined by how well you can adapt to the monster of the Sargasso Sea!