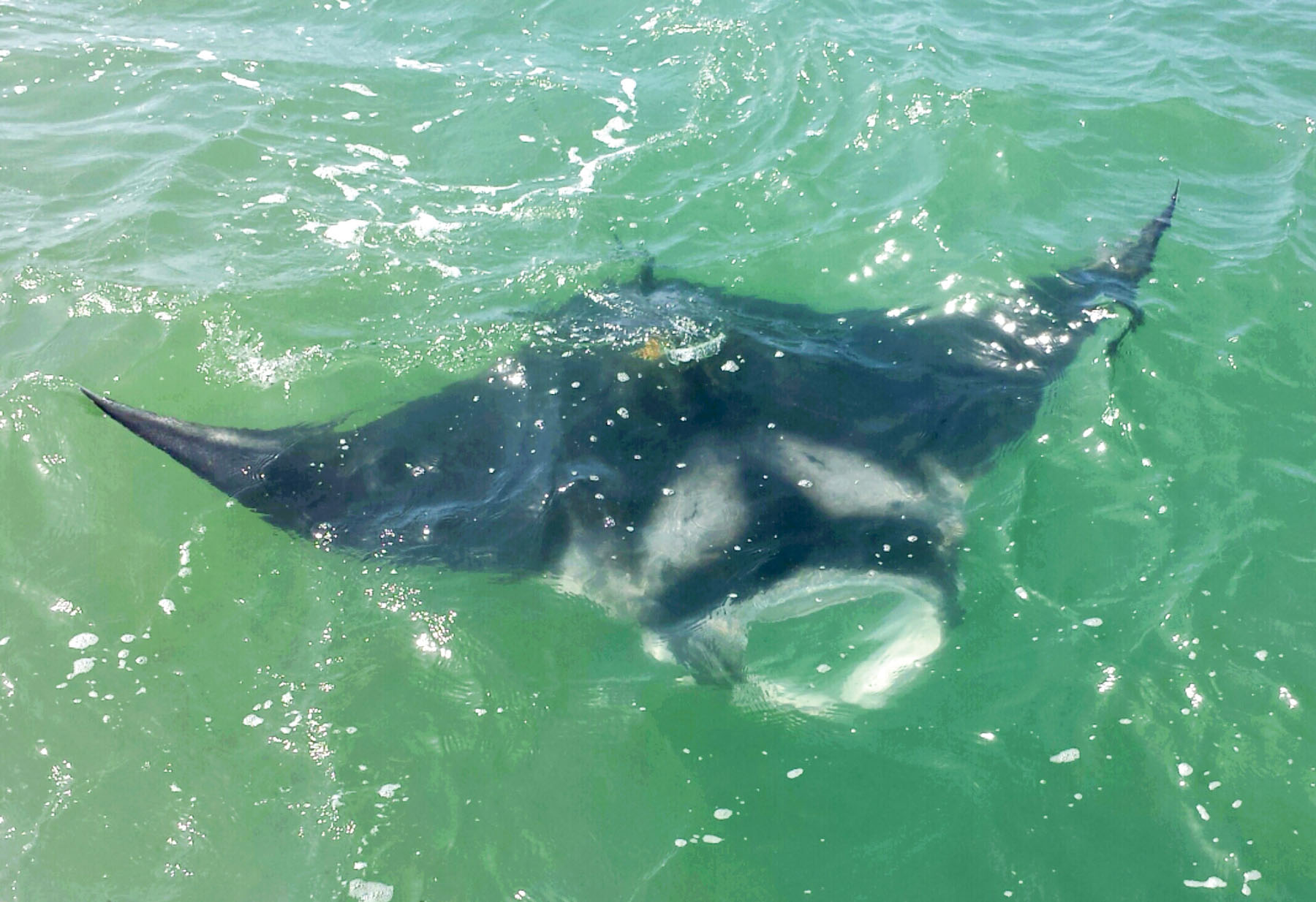 Manta Rays are some of the best “flotsam” found on the nearshore tide line. Cobia can occasionally be found swimming in the shadow.
One of the only calm days during the 9-day 2014 Federal red snapper season I ran my Carolina Skiff out to some rigs in 90 feet of water. For fun I boxed my two fish limit with three drops, which was one more than it should have taken. On the second drop an 18-inch rock hind grouper gobbled the bait before one of the 10-12 pound red snappers had a chance. I was jazzed to catch one so large, I knew it wasn't far from the state record of 19.5 inches. I was even more excited knowing that I would have some thick grouper fillets to share with my wife, Meredith.

Meredith was away on vacation for another week so I decided to eat one fillet and freeze the other for her. Just a few hours after my late Sunday dinner I awoke to the feeling that my insides were about to explode. I didn't get far from the restroom or get any more sleep that night. I felt like the flu had hit me wide-open but the strangest sensation had come over me. My stomach was growling and I had hunger pangs like I hadn't eaten in days. That is something I had never experienced with the flu, a virus or food poisoning. Lucky for me my charter the next day was in the afternoon which allowed more than a dozen hours to dry up.

I made it through Monday afternoon and Tuesday morning charters by a thread. By Wednesday I felt like a truck had drug me down the road and my joint and muscle aches were steadily getting worse. I Googled my symptoms and dehydration stood out above all else, questionable at best, though, as I'd been drinking fluids like a fish.

Off to the big city for more supplies: sports drinks, infant rehydration liquids and food for the POC compound. All was going well until that afternoon when I almost fainted in the middle of the store. I was lightheaded, confused and not making rational decisions. To this day I fear that I may be featured on one of those YouTube videos poking fun at people of Wal-Mart. Several hours passed with no recollection; I even drove at least ten miles to my house in Victoria.

Luckily my son, Sterling, called to chat that evening and woke me from a deep sleep. I didn't know where I was or what was going on, he sensed the danger and picked me up for a visit to the emergency room. I remember sitting there crying from muscle pains while trying to answer questions from the triage nurse. I even had difficulties signing the paperwork because my fingers were numb.

My preliminary diagnoses was heat exhaustion and dehydration but after multiple blood and fluid testing procedures they could not find anything wrong. Once I received some intravenous electrolyte infusion for good measure and monitored for a short while I was released. The discharge papers listed inconclusive results, my insurance carrier even hassled me by not wanting to cover the charges from the ER visit. The only good news that week was that on Friday about noon the symptoms mysteriously disappeared leaving me exhausted but relieved the ordeal was done.

Fast forward to Labor Day with a slick calm Gulf of Mexico from horizon to horizon. Meredith and I ran from structure to structure offshore bombing the bottom with big blue runners in hopes of some fresh grouper. All we could find were large red snapper at each snag. The grouper never cooperated but some nice cobia filled the box. Later that evening I thawed the other rock hind fillet to fry up with the fresh cobia. Meredith took one bite of grouper and luckily spit it out protesting that it did not taste right to her. Very strange for sure, it tasted just fine to me so I gobbled it down leaving extra cobia nuggets for her. At 2:00 AM I woke to the hell that was about to consume the next five days of my life.

Ciguatera is a food-borne illness caused by eating reef fish which have flesh contaminated with toxins from dinoflagellates. In tropical and subtropical waters these dinoflagellates attach themselves to algae, coral and seaweed upon which smaller fish feed and the toxin is stored in their bodies. In turn, larger structure-oriented fish such as barracuda, snapper, grouper, amberjack and eels consume these smaller fish. Commonly called ciguatoxin, they accumulate in these predator fish and can become very concentrated in larger and older specimens.

Ciguatoxin is odorless, tasteless and temperature resistant, so cooking or freezing has no effect on toxicity. There is no reliable over-the-counter test for the concentrated toxin in fish. To add insult to injury the toxin is not able to be detected in humans after ingestion. The only way to know of toxicity levels is to have a sample of the fish flesh tested by a lab.

I hope the explanation of my experience can help someone in the future in case of poisoning. People die worldwide annually, even here in the USA, due to misdiagnosis and downright ignorance in the medical field. I challenge everyone who reads this to study up on Ciguatera and share your findings with those you know and love. Awareness is the first step, ask your medical caregivers to do the same.

I'll be targeting bull reds this month crushing blue crabs on the surface. The crabs will be migrating to the gulf riding the ebbing tide. Many protein-rich egg-laden females will never make it past the line of demarcation to drop off the kids at the pool. This is definitely a sight-casting/hunting-style of angling. Most floating topwater lures will work when you see these fish riding the tide lines searching for an easy meal. For better releases of these bulls I recommend removing all but the rear hook on the plug, even change to a single hook if at all possible. Coincidentally that toothy patch in the redfish's throat is designed for this type of dining. Try not to let the fish swallow the lure by setting the hook immediately. I like gold or brown colors to better match the hatch, fly fisherman definitely have an edge by being able to mimic the prey almost exactly with hairy creations.

The bay water is likely warmer this month than any other of the year. The thin-skinned trout like cooler surroundings, so deeper waters oblige. Spoil islands near the ICW or any major channel can spell relief from the heat. Look for the deeper edges with steep drop-offs near the channel. When a barge or ship passes by, cast shallower where the fish anxiously anticipate food to be sucked off the flats.

Deep bay reefs harbor cooler water with increased water flow around the structure. On windy days, fish farther away from the shell making long casts to keep hull slap from spooking fish. Live croaker is king in these areas, free-lined or Carolina-rigged, with just enough weight to get the bait heading deep without hanging in the shell. I typically start with a 1/8 ounce egg weight and adjust heavier from there depending on current velocity.

August is the month to get out there and mix things up during the calm conditions. The Spanish mackerel and false albacore will be stalking and feasting on clouds of rain minnows and dusky anchovies. Kingfish and bruiser jacks will be working the current line that forms from the opposing currents of the inshore and offshore waters. The line normally forms along 30-45 foot depths here on the mid-coast. Look for flotsam in this area that will often hold tripletail and cobia in the shadows. I like to troll deep-diving lures and a spoon on the surface while working the current line with the clearer water.

Summer is slipping by, best to get out there before the water starts to cool. Be safe and do some research; educate and be aware of the lesser-known evils that lurk in our food.