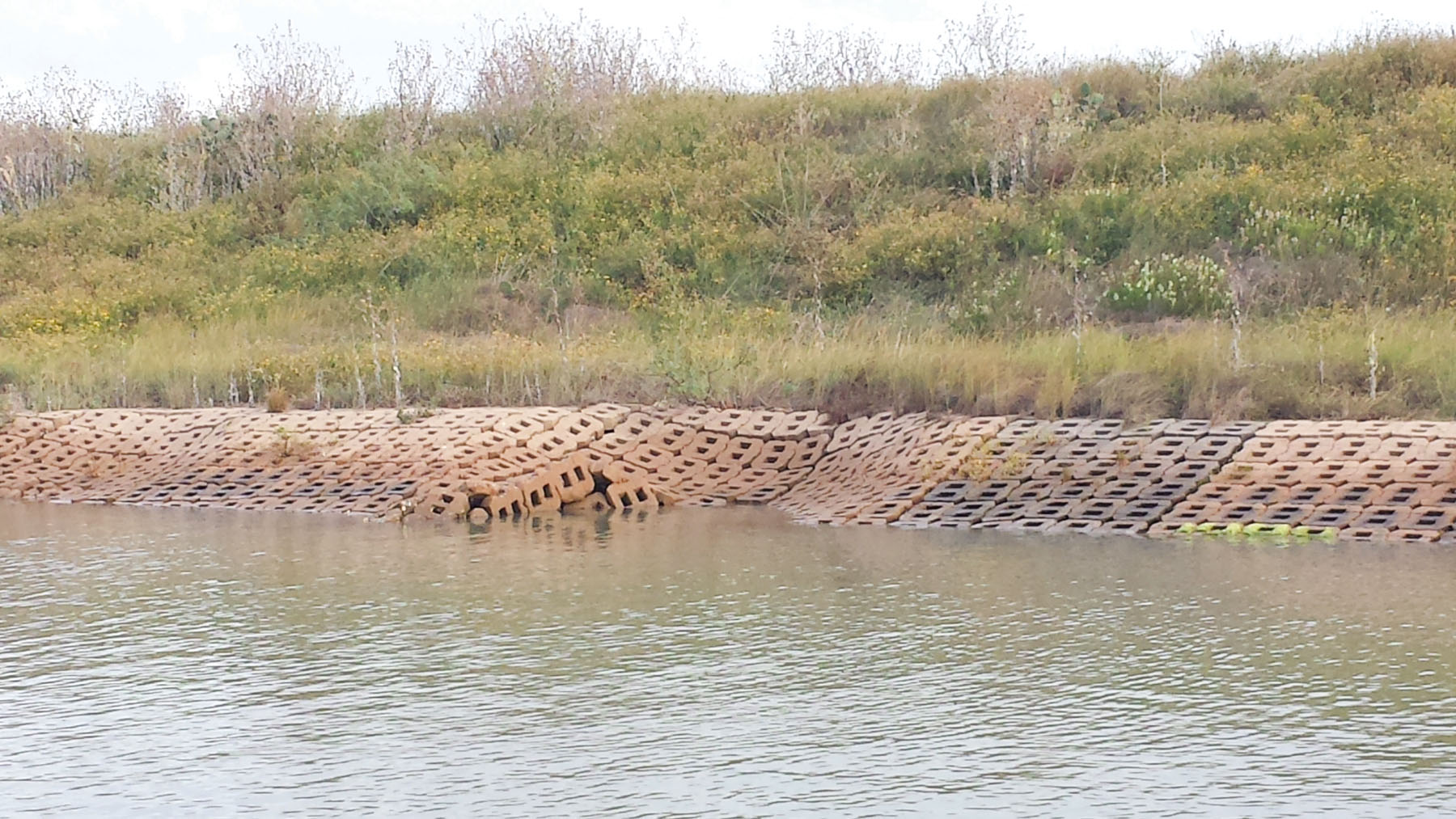 Shoreline “pushup” formed from a tugboat making up or changing the tow. Many times there will be a large washout on the opposite shoreline from the tugboats prop wash.
With over 400 miles of the ICW running through Texas, most coastal ports lie within close proximity. Many have literally grown along its banks. Often overlooked, but always nearby, the ICW is a major corridor for more than the maritime commerce it was built to accommodate. The fish we often aim to catch seek these waters while gaining access to other bay systems as well as to find seasonal stability. Tidal and wind-driven currents almost always exist and are exaggerated on the slopes of the deep channel. With water depths of 12-18 feet, for the most part, the ICW has a large volume of water.

The wintertime angler deals with many changing conditions such as tide level, wind direction and water temperature. When fishing the ICW the effects of these variables are less restricting. With greater depth than nearly all surrounding bays, the water temperature is more consistent and water (tide) levels have less effect. On the inland ICW sections the relatively narrow channel width offers some protection from the wind.

Most sections of the ICW have various types of structure to fish, either manmade or natural. The most pronounced and consistent throughout the entire water way is the channel drop-off. To illustrate I'll share some of my experiences, techniques and describe structure in this area. The mid-coast has a 20 mile stretch of inland waterway located between San Antonio and West Matagorda Bays. I'll admit we have it good here in the POC/Seadrift area with ease of access.

The ICW channel ledge The drop-off to the maintained depths of the 125' wide channel is significant. The ledge's depth and pitch of descent varies from area to area. Areas with a significant drop on the channel's edge (rather than a gradual taper) usually hold warmer water because there is less mixing from the shallows. Areas with a gradual taper generally have better aeration due to the effects of tide, wind and large boat traffic. Fishing here can be as simple or complex as you make it. Working the edge with a trolling motor casting soft plastics or, anchoring and fishing live shrimp are both very effective.

Geotubes Geotubes are sediment filled sacks placed along banks and shorelines to control erosion caused by tugboat wakes and they make excellent fish-holding structure. Spaces between tubes allow boats and fish to pass through while tidal and tug wash current carves holes where fish congregate. Anchoring near the geotubes is a common tactic but caution is advised as anchors can hang in the fabric, potentially causing damage to the tube, and tug wakes can sometimes swing the boat against them. Anchoring on the channels edge and casting back into the passage is very effective and safer.

Revetment blocks These interlocking or alternatively spaced bricks are commonly used in areas that have a quick descent from shoreline to the channels depths. A good place to target in cold weather. Coincidently these are placed to control embankment erosion to hold the bank in place. The formation typically forms a washout directly parallel to the lower bricks. This washout, several feet wide and 6-18 inches deeper than the closest water on the ledge makes a great pathway for traveling bait and feeding fish.

Intersecting channels Channel intersections are always worthy of investigation. Target species use the mouths of these channels to ambush baitfish while moving through. Bulkheads and pilings that obstruct the water flow are excellent targets. Be sure to fish the deeper depression near the ICW channel drop, this can be a flounder hangout.

Pilings Piers and docks from residential development may hold multiple species. Sheepshead encircle the pilings and posts nipping on barnacles. Black drum pick up small crabs and shrimp burrowed on the lee side of the posts. Trout and redfish do the same, but also prowl the edges of sunken green lights near piers at night.

Tidal flats Natural tidal flats adjacent to the ICW hold bait and gamefish. On many flats a shallow ridge will form on the edge toward the channel drop-off. The barrier forms from the waters flooding and draining effects of tugboat traffic. This shallow barrier grows and holds sea grass and/or oysters often, this new structure acts as a filter for the tidal flat. Baitfish congregate near this filtering area for protection and to feed. Gamefish are certainly nearby waiting for the bait to be flushed out.

Washouts and pushups These formations happen often when a tugboat has to make up or change the tow. To move barges into a required sequence end to end or to double-up side by side for better steerage. The tow is unhooked and the lead barge will be pushed up onto the bank while the tugboat swings the other barges into position. The grounded barge regularly makes indentions into the embankment or revetment bricks. On the opposite side of the channel's edge the wash from the tugboats thrusting can gouge out the shelf making a large hole. These washouts as they are known are excellent ambush and feeding areas for fish.

What to do and use Fishing here can be as complex or as simple as you desire. Working the channel drop with a trolling motor or waiting on anchor for the fish to find you can be equally effective. I like to use a Bomber Paradise Popper Xtreme float with soft plastics or live shrimp. This float is very effective with the bait suspended 24 inches below. The gurgling and popping sound of the Paradise Popper will attract fish from afar. It can be cast perpendicular to the channel as well as parallel presenting your offering on the drop-off. Soft plastics excel on a 1/4 ounce jigs, this weight gets the soft plastic into the strike zone near the bottom and keeps it there longer. Anchoring on the channel edge and fishing live shrimp will net the most variety. Try all three methods, under the float, free lined or cast onto the drop with a lightly weighted Carolina rig.

Dangers Being that the ICW was constructed for commercial maritime traffic, there are safety issues to consider. Wakes from cruising workboats or pleasure boats can push large waves of water when passing. These wakes travel at speed, compounding their energy when crashing upon the channel ledges. These wakes can swamp a boat quickly and possibly founder while putting passengers and equipment in the water.

Barges are another danger that all boaters need to be concerned with. Barges that are loaded heavy and are sitting low in the water displace a large volume of water. The tugboats pushing or pulling the barges have an enormous amount of thrust that pulls water from ahead of the tow and then forces it aft propelling the load. Both factors of water displacement can pull water off edges of the channel rapidly ahead of the tow and push the same water back with increased force flooding the water's edge.

Safety Boaters need to keep a vigilant watch for approaching boats or tugs. To manage the effects of the wakes an anchor may need to be released at a moment's notice. Many times it is much quicker to untie the rope and toss the line with a anchor buoy attached while idling bow first into the oncoming swell. Many boats get tossed about, spun around and possibly pulled under while on anchor. The attached buoy makes anchor retrieval or returning to your exact fishing spot simpler.

BARGE FACTS While a tugboat is attached to barges, the whole unit is known as a tow. Most common barges are 295' long x 52' wide A light tow travels at 8-11 mph, while a heavy load moves at 4-7 mph. Heavily loaded barges may take two or more times the overall tow length to stop. Example; three loaded barges fastened end to end (900+ feet in length) can take 1/2 mile to come to a complete stop. Head to the ICW this winter for variety and a change of scenery. Keep an eye on your surroundings, play it safe and box a few fish close to port.