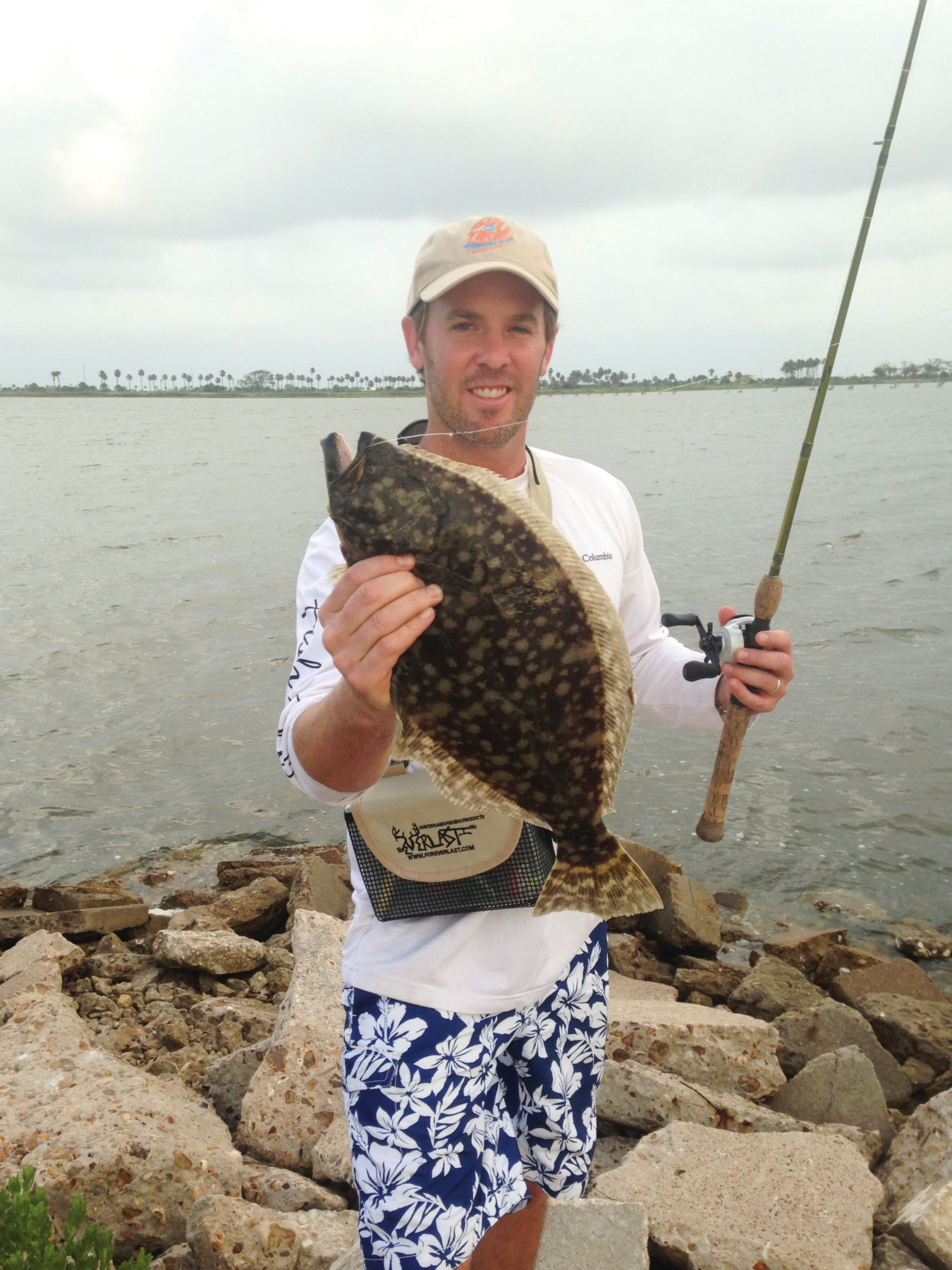 Alex Jackson walked the rocks for this nice jetty flounder.
November marks a true change of time, temperature and weather patterns on the coast. The summertime heat and humidity are almost forgotten due to the brisk air and lack of perspiration. The fish feel the effects of the cooling wind and water just the same.

Most of our warm-weather nearshore fish have followed the warmth south or further offshore. With increased frontal passages the opportunities to skip out to the state water's edge become increasingly fewer. The larger red snapper have moved inshore on various hard structure to join schools of mature redfish to compete for the food source. The stray cobia may still be in the area so always be prepared for a brown log to appear when you least expect it.

The schools of slot reds and mature bulls continue to linger to complete their annual spawn. Gone are the schools of Spanish and king mackerel, bonito, jack crevalle and tarpon that kept us entertained all summer.

Returning once again are the somewhat coveted sheepshead–that's right, I said coveted. Over the past few years I've noticed an increase in anglers targeting these tasty hard-fighting fish here on the middle coast. We see a push of larger mature fish of 17-22 inches show up at the gulf jetties. For the first couple of weeks they suspend in the middle water depths of 25-40 feet. Live free-lined shrimp seem to work exceptionally well when attached to light line without cumbersome heavy leader material. When cleaning these November-caught sheepshead I've noticed a large amount of green goop and minced hard shell in their stomach cavities. I believe these fish show for any easy meal, even to cleaning the granite of algae and barnacles that flourished in the warm summer water.

Flounder really start moving with the first few cold fronts that push through and drop the water temps quickly. Jetties are great feeding areas for the migrating flounder; my best catches are when the water is moving. On the ebbing tide, shallow sand flats on the bayside of the jetty and sand humps or patches near the edge of the rocks are where they're found. In light or slack tide situations flounder tend to lay up on top of flat rocks near the water's edge or settle on the deeper sand bottom where the edge of the rocks settle into the channel.

Bouncing or dragging soft plastic lures on the bottom gets strikes, as well as live finger mullet, mud minnows or live shrimp. Best method I've found when fishing bait is to use a short 5-8" length of 30lb mono, rigged Carolina style in a heavy current, or without weight when not so strong. I like to use a short shank hook with the bend to be slightly larger than the width of the bait. Such as a 3/O Mustad 9174 in 3" baitfish or shrimp, hooks of this style sized accordingly will decrease snags and increase the liveliness of the bait. In heavy current, hook the bait in the head, shrimp under the horn, and baitfish sideways through the nostrils to keep from drowning. In light or no current place the hook toward the tail for increased action to trigger a bite. With a shrimp I pinch the point off the top between the tail fins and insert the hook there and out through the first ring of shell.

Ideally you want the bait in the strike zone within 12 inches of the bottom and skip along while riding the current. To lessen the possibility of fouling rocks use a split shot sinker or a bass style worm weight heavy enough to get down. When using little or no weight keeping slack in your line allowing a bow to form will help it move along through the current and over structure. To achieve this you need to cast up current and pay out line from a free spool slowly while holding the rod tip upward close to a 180 degree angle. All the while watching for a hesitation or light tap indicating a bite. When this happens slowly lower the rod tip to waist level, if the line continues to drift with the current you most likely avoided a snag. If the line begins to move off into the current then it is a fish. I either count to three slowly before setting the hook parallel to the water or set immediately if a second tap is felt indicating the bait has been swallowed. If the line remains slack without movement it is a good idea to hesitate for few seconds longer then start to pull the line lightly into the current, if a fish has the bait this will normally make them swallow it (wait for a tap) or if the rig has become snagged you may be able to roll it out of the crevice if pulled slowly.

Soft plastic lures on lead-head jigs are very popular for catching flounder. Many anglers swear by one style or color of lure over another, but curl-tailed baits in either white or yellow seem to be the most commonly used here in Texas. Many swear by "sweetening" their jigs with bits of shrimp or slivers of baitfish. Better still, some old salts swear that a thin triangular strip of flounder belly will out-catch them all.

In September we had great success catching trout and redfish on clown colored 3.5" Yum Money Minnows rigged on 1/8 ounce chartreuse Bomber jig heads. While fishing shorelines with rafts of migrating finger mullet the best presentation was to pitch the lure into the bait and slowly swim it just off the bottom. Each trip we incidentally caught flounder, I'm looking forward to targeting them specifically with this same lure this month.

Get ready for what may well go into the books as the "best flounder run of all time" on the Texas coast. Box your two allowed keepers and carefully return the rest to continue their migration. Proof that letting them get to the gulf to spawn in great numbers is now showing on the ends of our fishing lines. Thank you, Texas Parks and Wildlife Department.