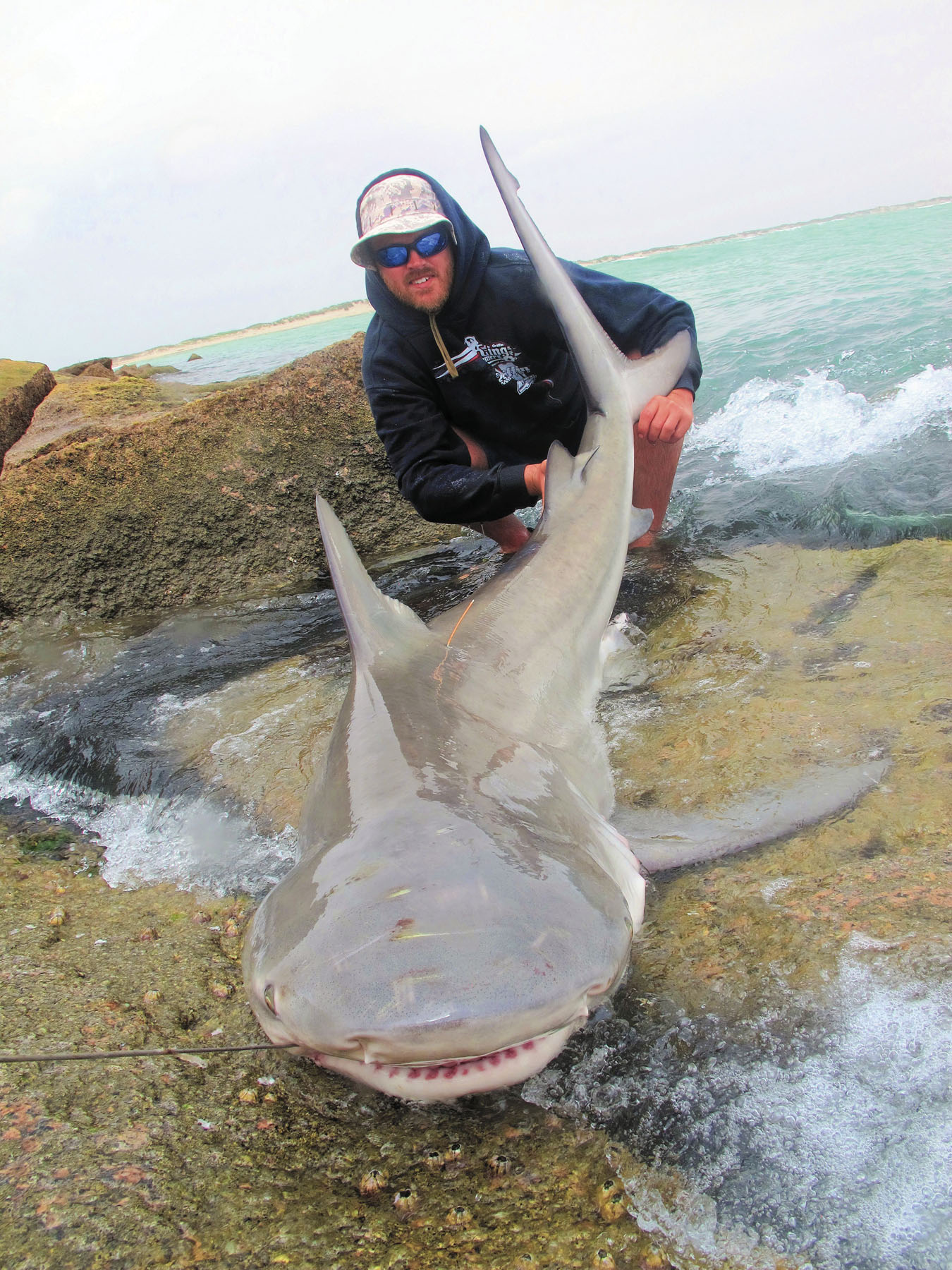 A very respectable bull shark tagged and released from the rocks by Brad Tabor.
Perhaps the greatest advice in the realm of fishing is when trying to find the fish, pursue structure. There is no larger structure in our coastal waters than the man-made marvels that are our well known jetties. Those who fish the rocks of the various Texas jetties demand a certain amount of respect. A combination of algae-covered granite and ruthless gravity have caused many vicious injuries to fishermen over the years. While these rocks are notoriously dangerous, those who take to them via their specialized "jetty goat" instincts can be rewarded for their commitment. In addition, the accessibility of a boat or kayak can prove very helpful along these long massive structures. Whether it is the century old Galveston Jetty or recently engineered Packery Channel Jetty, each set of structure contains a unique ecosystem of marine life with great fishing potential.

Throughout the years I have fished most of the jetties Texas has to offer. I have battled enormous sharks off Fish Pass and wore my arms tired reeling in oversized drum and reds off Surfside. Massive king mackerel have destroyed my baits while in the kayak off Port Aransas and explosions of tarpon and jack crevalle commonly erupted off Port Mansfield. When mass congregations of predators show up demolishing bait, there is no other place I would like to be fishing than the rocks. These structural meccas are our only inshore locations to likely encounter various exotics. Each year, sailfish are hooked and landed just off the Port Aransas jetty. Going back in time to the 1930s, legendary angler Gus Pangarakis landed two iconic records off the Galveston north jetty, a goliath grouper and a monumental largetooth sawfishGus' records still stand today.

Efficiency requires experience and knowledge at any jetty. In no other area along the gulf do the tides play such an important role in fishing as they do in these channels and passes. Outgoing tides can suck out a plentiful supply of bait that gets ambushed and ravaged by predators. During the boiling summer doldrums, these submerged mega-structures provide valuable habitat. Early morning and late evening can produce an array of trout, jacks, snook and tarpon. Drifting ribbonfish in the kayak will likely result in some exciting kingfish activity. Launching a live mullet out and fishing just off the bottom is all too enticing for a lurking bull redfish. On calm clear-water days, spearfishing can yield a limit of healthy sheepshead and mangrove snapper. The possibilities are truly endless, just pick your aquatic poison.

It is no secret that I am a full-on shark fisherman. During the harshest of conditions, the jetties allow for protected waters. Whether a blisteringly cold norther, or springtime's endlessly raking southeast winds, you usually can find some sort of refuge when all other options appear impossible. In regards to shark fishing, I have come to terms many times with the great fishing late-spring has to offer. I will often resort to lacing up the cleats and flirting with the slippery rocks in search of monsters when all others are cancelled by weather. Both Port Aransas and Port Mansfield's north jetties allow you to shark fish when southern winds blow in excess of 25mph. One of my favorite methods of floating live baits out under balloons. With ripping winds, you are able to float your bait (skipjack or whiting are ideal) up the surf as far as desired. Blacktips and bull sharks are common visitors to these areas and are usually the targeted species. Over the years, even large tiger sharks and hammerheads have come off all jetties throughout Texas.

Shark fishing is a dangerous game when granite hopping. It is very important to keep focused at all times. You could very easily slip or misplace your footing within a crack resulting in a very unfortunate injury. Depending on the particular jetty you are on, help could be hours away. And for sake of the fish, when landing a shark, be sure to not to drag it up on the rocks too far. You will often injure or possibly even kill the shark. Find a level slab of rock as close to sea level as possible. There you can land and release accordingly. Even then you are still susceptible to danger, as proven with an encounter of my own nearly a decade ago. Rough conditions slammed a wave into the rocks as I was working on releasing a 150-lb sandbar shark. Unpredictability led to the shark swinging its head out towards the water (with its mouth open) and seriously scraping my hand, severing tendons. Horrible driving conditions resulted in a four-hour-eternity of a ride off the beach straight to the hospital.

While I do enjoy shark fishing off the rocks, there is nothing more exciting and flat out fun than pursuing schools of tarpon or jacks on lures. Starting in late-September, jackfish begin piling up along the jetties for the annual mullet migration. At times, a mix of jacks, reds, and tarpon will all work together annihilating pods of mullet. Over the years our best selection of lures have always been either topwaters or a variety of swimbaits. Witnessing frenzying jack crevalle chasing down topwaters rivals footage only Nat Geo could provide. In contrast, throwing large swimbaits for tarpon is ultimately the surprise strike of the day. Unlike the jackfish you see crashing the topwater lures, the tarpon often will gracefully suck down the swimbaits. Your initial thought is that you are hung up on something, only to realize it is indeed a fish. Then, in most cases, you are treated with a brilliant aerial display of the silver king launching out of the water showcasing the sheer size of the beast you are tangling with.

The magical "witching" hour is usually an hour before sunset. It is not uncommon to see mackerel, tarpon, and blacktip sharks all breaching the surface while ambushing tide-trapped bait. While snook along Texas jetties are not as common as in Florida, we do have moderate populations (fat snook species) that will partake of the bounty of this prime feeding time. Our snook are most often caught using small artificials and usually speckled trout will appear in the mix. The numbers of fish associated with this habitat is quite impressive and incredible list of species that can be caught will never allow you to lose interest. I have walked the granite labyrinth of the jetties for years and each new day brings a new surprise. Having dived a couple of the jetties, it is really not until then that you appreciate and notice all the life that truly accumulates at these astonishing structures. Though dangerous in general, a keen sense of awareness and smarts will nearly always keep you safe on the jetties, allowing for a most adventurous trip.