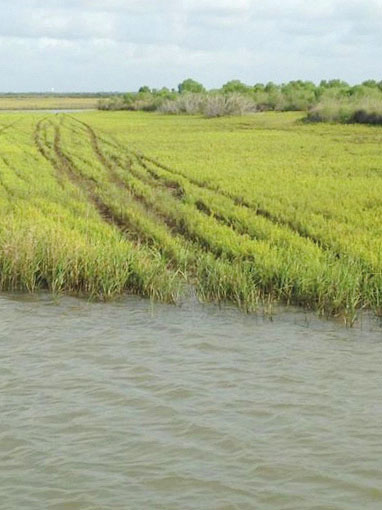 Mud motor scars through the cordgrass.
"The aim of an argument or discussion should not be victory, but progress."
Joseph Joubert (1754-1824)

Progress on the subject I want to discuss would be great. I'm not sure whether those who need to hear this will actually read it; but here goes.

I'm generally a go-along, get-along kind of guy. That is until someone messes with somebody or something I love. Family, my little ranch and my dog are on that list. Also on that list are our coastal waters and the redfish that inhabit the flats. Through my years as a cop and homicide detective, saltwater therapy kept me sane. No matter the horrors I witnessed in the big city, I could realign my soul by disappearing onto a quiet flat with fly rod in hand to quietly stalk tailing redfish.

Here lately though, days that "calm" me are becoming increasingly rare. Instead, I catch myself getting more irritated as the day goes on. I hate it and I'm tired of it.

So what's been getting under my skin? The total lack of respect for fellow anglers and the resource by a few inconsiderate individuals. That's what!

I will likely spend close to 200 days on the water this year and hardly a day goes by that I don't see something that makes me shake my head – mostly just plain old rude behavior, others are unethical, and a few are illegal.

This past weekend near Port O'Connor I was running the marked channel through the Saluria area around Houseboat Flat. For those unfamiliar, this is a good sized shallow grassy area bordered by an island on one side and a long curving bayou on the other. As I went by I noticed a couple kayakers were up there sitting sideways, easing along and obviously stalking fish. My first thought was, "Good for them, hope we find some where we're headed."

Halfway around the flat I heard the scream of a fully-jacked-up outboard behind me. I glanced back to see a boat cutting across the flat within 50 yards of the kayakers. I don't know exactly how much time this little stunt saved them but, I'd be willing to bet it ruined the kayakers' day, at that spot anyway.

Arriving to the area I intended to fish, I discovered another skiff already poling there. Oh well, I switched up my plan and eased to the opposite shoreline of the cove. Easing along, here's comes another boat screaming up behind me. This is a pretty big cove and I was pleased that he was at least running the deep water down the middle. My mood changed though when he made a sharp turn directly in front of the other skiff and shut down. Another day ruined.

As we continued our day there were plenty of fish, but something was obviously not right. My customer that day was an experienced fly fisherman that I've had on the boat many times. The dude is good. He can cast and knows how to feed a fish. We would spot a tailing or cruising red, ease into position and drop a fly on him, only to watch the fish bolt as if he'd been shot at. That was if they even let us get close enough for a cast.

Our answer showed up in the form of a flats scooter running straight towards us not ten feet off the shoreline. They were a good mile away, but headed straight towards us. Two guys standing on a white poling skiff are hard to miss, yet these guys rode that shoreline all the way, swung out a short distance to go around, and then went right back to the edge of the grass. Miles of good shallow water burned.

No telling how many times a day this happens on any given shoreline. Little wonder the reds were spooked out of their minds. If you had a dragster run through your kitchen every time you went to the fridge you'd get a little twitchy too. We relocated.

Our next stop was a large and shallow grass-bottomed lake. Some guys had parked in the far corner and fanned out to wade. As I poled across the flat I heard that all too familiar noise and along comes another boat, two guys atop the console zigging and zagging all around the flat, passing within casting distance of the waders. And the worst part is they never even stopped to fish!

The chain of events that followed was even crazier. The irritated waders loaded up and proceeded to do a donut on the shallow grass to get on plane, roostertail of mud and grass, etc. They then headed towards one of several exits, right past two waders stationed along the gut. Multiple experiences ruined just because a couple guys wanted to joyride and have a look around.

Back on my home waters of Galveston things aren't much better regarding habitat destruction. We may not have the huge areas of seagrasses like the rest of the coast, but what we do have are marshes full of cordgrass. The edges of that grass provide sanctuary and food for baitfish, shrimp and crabs. This in turn provides food for the gamefish we seek. The thick root systems of cordgrass hold the marsh soil in place, preventing erosion and loss of habitat. The last few years a disturbing trend has developed with the increased use of surface drives most folks call them "mud motors." These things can push a jon boat across dang near anything, including cordgrass. Instead of making a few turns some of these folks are just running a straight line to wherever they want to be. The result is a trench through the grass.

A couple years ago I saw one of these trenches on the north shoreline of Greens Lake. It cut from the lake, across a twenty foot stretch of grass, and into a small bayou. Following the slough might have taken two or three minutes. This happened in November. By March the trench was a couple feet wide and flowing on high tide. By the end of summer it was several feet wide and flowing on low tide. Today it is thirty feet wide, four feet deep, and still growing.

Why are these things happening? Is it a general lack of respect or lack of knowledge? I'm not sure where we older salts went wrong in our mentoring, but I want to challenge each of you to make an effort on some level to do better. I know I will.

Talk to those you take out on your boat about conservation and courtesy. Politely explain to those you see doing wrong what mistakes they are making. I'm not talking about chasing them down in the heat of the moment, but if you run into them back at the dock it isn't that hard to strike up a non-confrontational conversation. Perhaps if we all pitch in we can steer the next generation of anglers in the right direction.

My hope is that this discussion will lead to progress, which in itself will be a victory.