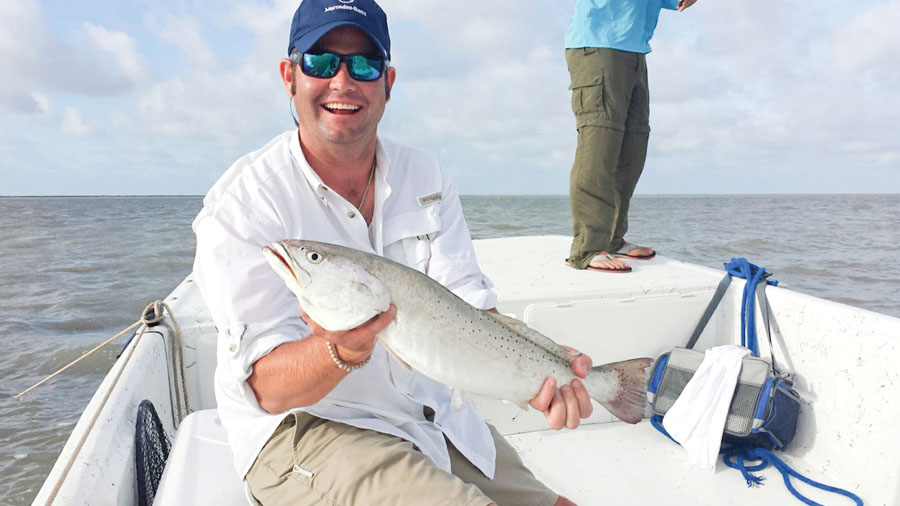 The tried and true method of popping cork and live shrimp duped this nice speck.
Years ago I learned a valuable tip while fishing with Captain Billy Sandifer. We were traveling Packery Channel headed offshore for the day in his 25' Panga. As Billy motored parallel to the channel drop, I readied myself on the bow for the one cast we needed. They swam right at us, the only finger mullet school within hundreds of yards and I missed my mark. Not just by a little, I threw at least 10 feet over and past the school!

Embarrassed and dumbfounded, I handed the net to Billy for the save. Fully expecting the worst, all he said was, "That's a light net. Didn't you notice?" In the early morning haste and excitement I did not realize his modification. He had painstakingly removed every other weight on that 4-foot cast net with a flat bastard file. Doing this allowed the net to be thrown easier in shallow guts in the surf. I realized then while watching Billy walking barefoot to fill the bucket with mullet, light nets excel around scattered oysters. This is a modification I now use to help me catch mud minnows.

In a perfect world, having the option to purchase any live or fresh dead bait would be ideal. Most bait camps will have a good selections of frozen bait on hand to choose from. Live or fresh-dead gets the bite more often than not over frozen. Sometimes, the only way to get what you want is to catch it yourself.

If seeking shrimp live or dead, croaker, grunts or crab, purchasing them is normally the best option. I've attempted to catch them fresh myself with limited success. Bait trawls, or sportsman's nets as they are known, are cumbersome, messy and very time consuming to use. Setting traps for crabs or finfish can be very effective at times. Personally I have rarely enjoyed the benefits of ownership for an extended period once set and unattended. Often people help themselves to my catch or borrow my traps indefinitely.

For catching finger mullet, big "cutter" mullet and ballyhoo, the Betts "Old Salt" 5-foot net is my preferred tool. The best place to locate bait is on a channel edge or shallow drain that has good water flow or tidal movement.

To catch menhaden, I use a heavy, 6-foot net. Lee Fisher makes the best I've thrown, marketed as the Bait Buster menhaden net. This net is not normally used to cast blind because of the size and heft of the weights. A good net for menhaden has one-and-a-half times the normal lead weight and a 5/8-inch square mesh panel. When combined, these features allow for faster sink rate and a flat opened net in deep water.

I look for menhaden schooling across open water in the bays and also on the calmer sides of fast moving tidal flow. Menhaden are filter feeders and prefer turbid water, wind-blown shoreline drop-offs and spoil areas near ship channel edges. Often flocks of brown pelicans can be seen from a long distance diving into the water from high above, alerting us to the bait locations.

I prefer to toss the net on top of a concentrated school that pinpoints their location with light flicks of water thrown 3 to 6 inches into the air. They school and feed in a diamond-shaped pattern with the bulk of the school located directly on bottom. Oftentimes, they rub their bodies in the silt to dislodge particles, which they then feed upon. The net needs to fall with a semi-slack line, undisturbed, until bottom is reached or when telltale pulls are felt from frantic fish pushing into the mesh.

Caution should be exercised when throwing a large net in water 8 to 12 feet deep. Sometimes, predators are mixed in feeding on what you are targeting. I regularly see sharks and rays, and I almost always net way too many gafftop. Several times, I have netted large jack crevalle and bull reds that made me consider cutting the rope.

For stability, I bend my knees slightly and space my feet at shoulders width, allowing for a good stance while centered on the bow. It is best not to double the loop to form a hitch around your wrist. If this cinches tight with a large tangled predator, you may not recover unscathed.

If you want to catch big fish, hook a live menhaden through the nose and toss it behind the boat. Continue drifting the area fishing and throwing the net.

A great way to gather pinfish, sand trout, and sometimes croaker or grunts for bait is by using a Sabiki rig. These rigs are very effective on catching finfish of all sizes and many of them simultaneously. My go-to is the Mustad Piscator in size #8 or #10. These have five small gold hooks adorned with an imitation shrimp or shiny fish-like skin and colored beads. These catch baitfish with and without bait on the hooks, but some small pieces of shrimp can increase your odds of success. I have been using a dedicated Sabiki fishing rod to decrease tangles and have this bait catching tool ready always. Mashing the barbs down on the hooks help get the baitfish unhooked easier as well as your skin or clothing in case of a mishap.

What to catch and use this month

With the warming water and increased forage, topwater lures are much fun and very effective. Trout and reds pounce on them regularly.

D.O.A. shrimp rigged in tandem are hard to beat fished while drifting shell reefs. I like to remove the included hook and thread the body onto a 1/8-ounce jighead. Rigging the modified shrimp on the trailing hook gives an original shrimp plenty of action in the lead position.

Live shrimp catch just about all fish swimming the bays this month. Rigged under a popping cork, the splash and fish feeding noise emitted bring fish in from a distance. D.O.A. shrimp with shrimp scented Smelly Jelly applied to it work almost as good. Possibly better than live, considering that you don't have to replace a bait after each bite.

Large, solitary jacks that entered the bays in March will be running together in small packs later in April. Look for them on outside shorelines busting mullet. Try to maneuver in front of them and drag a large Super Spook across their path at a fast rate. Hold on, and be prepared to give chase if hooked on light tackle.

Large black drum will still be schooled up completing their spawn through mid-month. Expect to catch a few bull reds mixed in with the schools found in the same areas. Cracked crab, and better yet, live mullet or fresh-cut menhaden will better fool the reds.

On incoming tides slot reds will be more predictable by feeding near the water's edge on windward shorelines. They will tend to fall back toward the drop-offs bayside around sand pockets on ebbing flow. Working drop-offs on the trolling motor or drifting with lures and live bait mentioned previously work well. Anchoring and fishing cut mullet or menhaden in same areas may be just as effective or better on windier days.

If conditions allow, the nearshore action should include migrating cobia schools, red snapper, Gulf trout and large sheepshead at the short rigs. Live shrimp are good for all, while slow-trolling deep-diving Russell Lures around structure may get a king mackerel's attention early in the season.

April is a great month to become proficient at cast netting if you are not already. Throwing the net always makes me hungry from the hard work, especially if I'm constantly throwing tostadas instead of tacos. Let me know which one catches more bait for you.