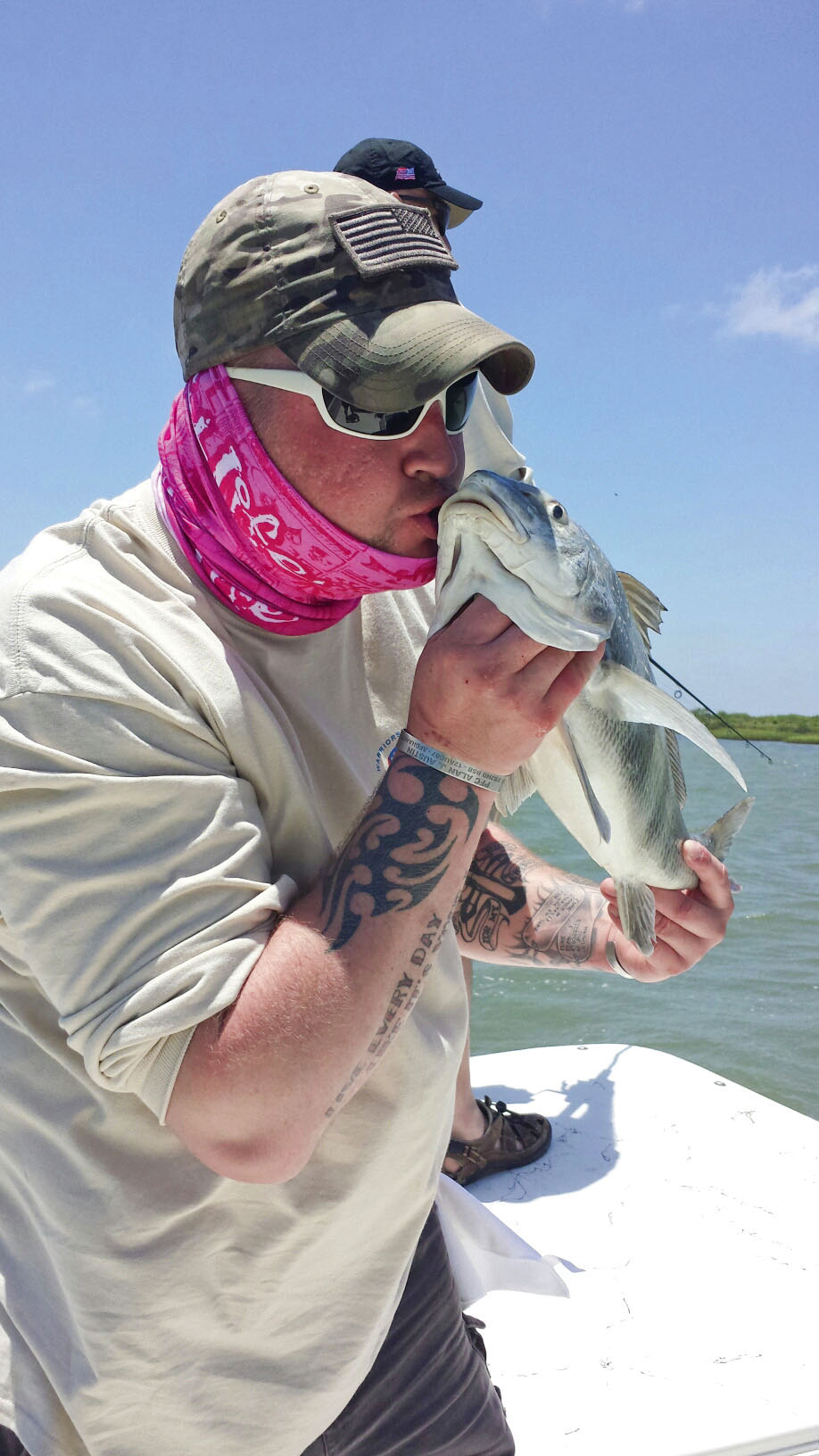 Even tough men are affectionate toward black drum!

March is the gateway to springtime with the much anticipated and welcomed warmer and sunnier days. Short pants and visors are the norm with the spring break crowds, as well as sunburns and bent rods. There are many fish to be caught and good times to be had by all.

Large black drum are big crowd-pleasers for March anglers. These fish amass in large schools during their spawn, which peaks this month.

Many of the larger fish are found in the deep waters of ship channel jetties, inshore cuts in the bays, and natural passes to the Gulf. All one needs to find action is to look for an accumulation of boats anchored within close proximity in deep water.

A strong incoming tide will get the fish in the mood for food and any good water movement can lead to exceptional catches. Look for steep drop-offs or ledges formed from current gouging shallower areas. Fifteen- to forty feet are good depths to target, even areas with shallower cuts may hold schools in the bends and off the points. Inlets intersecting the Intracoastal Waterway and channels leading into bordering bays should be investigated also. I regularly fish areas like these, especially if there is live oyster shell on the edges or lining the channel drops. These cuts and navigation channels can often serve double for those seeking black drum and also willing to throw live shrimp for other species, anywhere near or around the shell. We regularly catch a mixed bag of slot black drum, redfish and sheepshead while soaking drum baits in deeper waters nearby.

A prudent approach is needed for successful catch and release of these large black drum as not to cause undue stress or physical damage.

Appropriately sized tackle should be used as well as the terminal rigging on the business end. Reels should have a firm drag setting and be spooled with 30-pounds/test or heavier line. Rods need to be stout enough to handle large fish in heavy current.

Drum do not have sharp teeth or fins, so heavy mono is preferred over wire leader material. I like to use at least 80-pounds/test mono leader material for abrasion resistance and to minimize damage to the fish. Heavy mono helps prevent injury if the leader gets wrapped around the gill plate or tail during battle.

Circle hooks are preferred for catch and release fishing. I like to use a hook that is sized to the bait and fish targeted. All circle hooks are not created equal. True inline circle hooks make purchase in the lip or jaw most often. Offset hooks actually works the best, but can catch in the throat, gills or stomach. Deeply hooked fish have a higher mortality rate and it may be better cutting the leader leaving the hook intact to rust away. To minimize injury, I prefer Mustad In-line Demon Circle hooks 39944BN, 39948 or 39965D when using offset. I recommend sizes 12/O- to 16/O for large baits and 7/O- to 10/O for the smaller.

We can do several things to help the fish survive and realize better hookups with circles. Rig with a fish finder leader which situates the bait where the fish are located. Use appropriately sized weights to maintain a tight line and keep the bait on the bottom. Setting the reel drag firmly and leaving the rod in a rod holder to allow the heavy pressure to slide the hook toward the jaw. A couple of hook setting pulls may help once the rod is bowed and the drag is slipping even though this is generally deemed unnecessary. In addition, while keeping a tight line, this will telegraph subtle bites or telltale taps as the drum "tastes" the bait. If the line becomes slack it should be reeled quickly to keep the bait from making it down to the crushers in the throat where many are deeply hooked.

Fresh bait over frozen is always best, like cracked crab, large dead shrimp, whole crawfish and one of their favorite being large mantis shrimp. Commonly, I see people using very large whole blue crabs with carapace still attached with limited success. Crabs, whole or cracked in pieces, should be trimmed to the size of a soda can's top diameter to get the most bites. I prefer to remove the legs in heavy current to keep bait from spinning but leave them intact in light current to increase bait action and appeal.

I commonly employ twice as much anchor rode as normal to get my boat into an ideal spot. The anchor is dropped in deeper water to get a good bite and then line is paid out to get near the intended area. Fine tuning the boat placement can be had by pointing the boat's bow at intersecting angles to the current. Sometimes, the boats rudder or engine skeg can be used to turn the bow in the current. Additional tie off locations other than the center bow cleat can be used in heavy current or when the wind is opposing the current flow. Cinching onto spring cleats midship or utilizing a drift sock from a stern cleat can also help turn the bow.

NEW LIFE IN THE BAYS

With waters warming more species of fish and bait will be showing up in the bays. The spring equinox will occur March 20 bringing much higher tidal levels. The warming trend coupled with rising water levels will bring new life into the bays.

The spring flounder run, or as I like to call it, "the flounder crawl," kicks off early this month. Most of the flounder we catch are small compared to the fall run fish. Many are just at or under the minimum size length. I've been told before that the males come in first followed by the larger females at a later time. We've done our best fishing on an incoming tide with live shrimp. Maybe because that is what we use this time of the year? Channel ledges and up-current of drains, points or hard structure are good places to target.

One man's trash fish can be another man's treasure. That's right, I'm talking about the good old gafftopsail catfish. To the disdain of most anglers they come back into the bays this month in full force. Whatever you call them in vain, be it - slime balls, snot sharks, gas tops, sea cats, slime cats or sailboats - they actually taste good and put up a decent fight. I rarely target and retain them, but on occasion, I have requests, especially during the S.T.A.R tournament.

In the same areas the big drum are caught the gafftop thrive. Just about any terminal tackle rig will work, but circle hooks make unhooking them much easier. Almost any bait will work, but 3-inch long chunks of squid and eel are considered best. I like to employ The Fish Grip tool for ease of handling boat side; remove the hook, clip off their sharp fins with end-cutter pliers, and drop in the cooler. With this method, you don't necessarily need to touch them until the cleaning table. A dedicated cooler with an ice and saltwater slurry works wonders to prepare the catch. Stirring the mix with a net handle occasionally will help strip the slime while chilling the catch.

These "mouths with fins" make for an excellent fish fry, and also a crowd-pleaser, especially if your dinner guests did not see you filleting them. The fillets have a strong flavored skin and red streak down the center that should be removed before cooking. Soaked in buttermilk, then fried extra crispy with a seasoned batter, this catfish makes believers out of most.

Pull your boat out of storage, dust the cobwebs off your tackle, and load up for the coast this month. Don't forget the sunscreen!