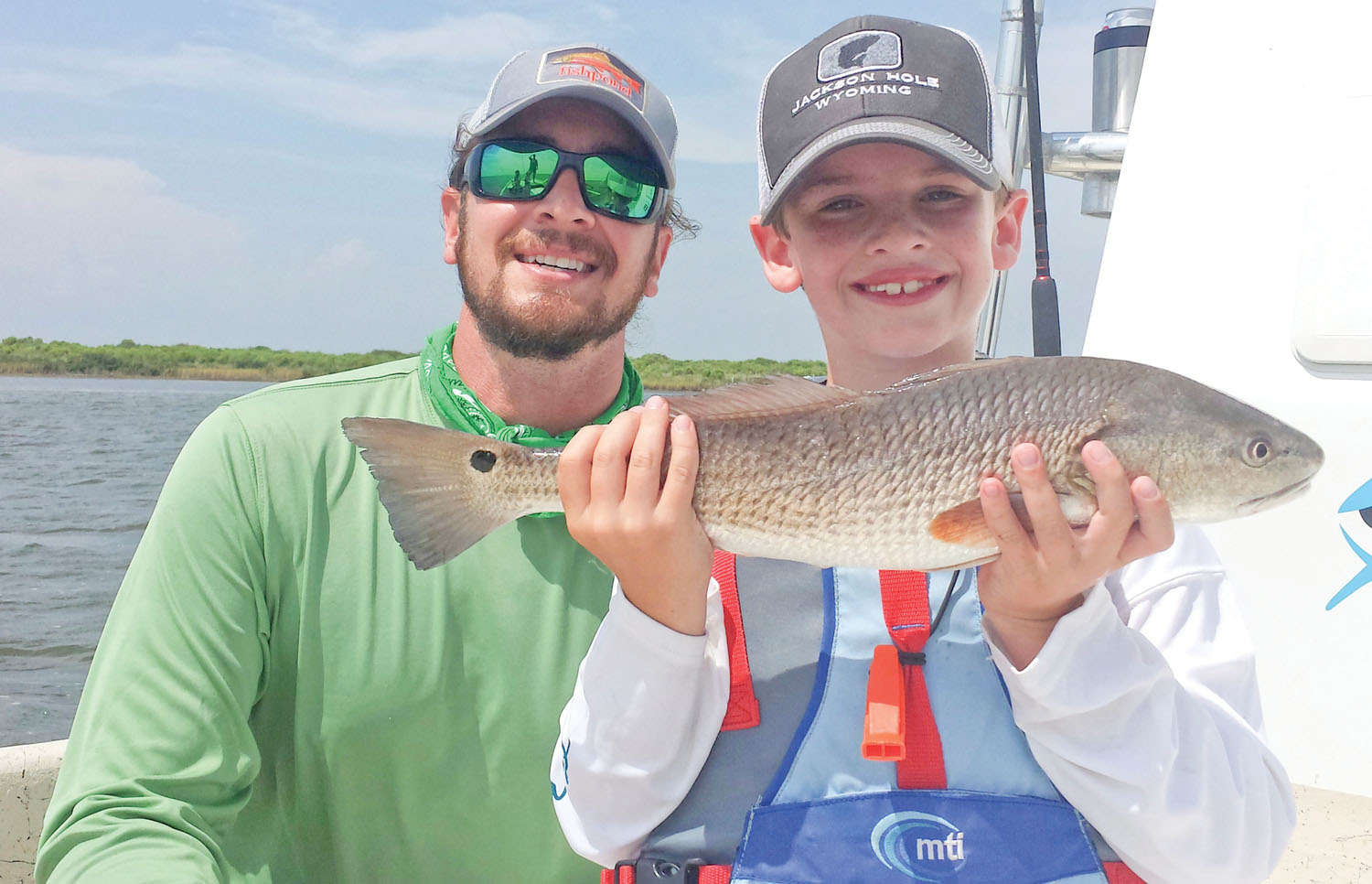 With some great coaching from his father Steven Ward, Dillon caught the best redfish of the day.

Here on the Texas mid-coast, October is my best month to score with schools of redfish. Upper-slot fish head to the deeper water to join the larger "bull reds" during their annual spawn. The "bull red run" as many call it continues all month.

A variety of techniques, baits and gear can be used to catch these reds. Ship channel jetties, natural and man-made passes, the surf and nearshore structure are all good areas to target

Each year many people decide to tag and keep a large redfish because it is the biggest fish they have ever caught. They are indeed a true trophy but many anglers are disappointed at the cleaning table by the coarse meat and tough skin. I regularly encourage my clients to release the mature redfish specimens up to about 33-inches are the largest I suggest for table fare.

Where to Catch Them

Finding them is not very difficult with most mature reds relocating recently toward the Gulf of Mexico. Areas with good current flow bring the fish together, grouping them in large schools as well as funneling forage to them.

Jetties and passes that give way to the gulf are prime locations for congregation. Look to the ship channel ledges and waterway intersections for increased current. I typically fish ship channel jetties by anchoring where the rock piles end and the sand bottom slopes toward the center of the channel. Ends of rock groins, near boat cuts and deep holes on the sides of the channel are most always target rich and good places to fish.

In consideration of the larger sized fish being targeted and the obligation we have to release these spawners, heavier tackle is used. We normally use 50-65lb braided line or 30-40lb monofilament on the reels. The heavy action rods are capable of handling the weight of the fish and force of the current where these fish reside. A long battle on light tackle puts undesirable stress on the fish during this important part of their life cycle. Additional time may be required to revive these big fish caught in deep water. Holding them by their bottom jaw into the current forces water over their gills while recovering.

Monofilament leader material of 60-100 pound test works well and is preferred in this style of fishing. Steel leader material is discouraged due to possibility that the fishes gill plates or bodies may be damaged while the fight is on.

In and around snags and the granite groins, a single drop leader or knocker rig works best. The "knocker" is basically an egg weight riding directly above or very close to the circle hook. By keeping a taught line you can occasionally lift the rig and drop it back down to tap the rocks or bottom. The weight placement, short hook lead and tight line help minimize snags while keeping the bait in the strike zone.

When fishing channel edges or open water without snags we use a Carolina rig 12-36 inches in length with an egg sinker heavy enough to keep the bait on the bottom. Most rigs are constructed with a Mustad 39941 circle hook sizes 6/O - 9/O depending on the size of bait. When using a circle hook don't bury it in the bait. Keep as much of the hook gap exposed to assist the hook in finding the preferred placement, in the corner of the mouth or lip.

Fresh dead or frozen baits like menhaden, Spanish sardines, mullet and large white shrimp are all good choices. With finfish I insert the hook into the bottom jaw and exit between the eyes in the center of the head topside. Both menhaden and sardines have an oval shaped hard plate on top of their skull, hooks hold best here. Cutting off the tail from mullet and menhaden and peeling the shrimp both keeps baits from spinning in the current and releases more scent.

Get some live crab if you really want to catch and release a large quantity of bull reds. Reds will follow the sweet smell and flavor into the current from surprising distances. Remove the carapace and fish the body of the bait directly on the bottom.

Chumming definitely increasing the odds of hooking up or holding a school nearby. I like to toss a handful of chum up current as soon as a fish is hooked up. Most baitfish work well, with mullet, menhaden and sardines all being popular. Chopped shrimp pieces and their heads bring fish in as well.

When using cracked crab for bait I chum with the carapace. The claws are especially productive when cracked to let the juice out. The weight and density of the claws allows these tidbits to drop through the water column settling near the hooked baits below.

With the cooling water temperatures, migratory species will soon began moving on. Some go further offshore while others follow the food source south, but don't give up on them completely. In recent years we've experienced mild weather through most October. Make the most of it by heading outside the jetties when the weather conditions allow. Many times we catch a string of calm days after a light frontal passage blows through.

Kingfish, big Spanish mackerel and schools of cobia roam the state waters until the water temperatures drop into the lower-70s. These fish are normally more concentrated, so trying several spots may be necessary to connect. Live bait tend to bring them in or get them feeding better. I like to drift while free-lining live pinfish near structure like gas platforms, shallow reefs and anchored cargo ships near the ports.

In October, bottom structure in 70-foot depths or less can hold a good quantity and variety of fish. Upper-slot and oversized redfish are common catches alongside black drum, large sheepshead, bluefish and red snapper. Most fish will be down-current and directly on the bottom near structure. Larger fish often stage themselves up-current from structure.

October has the most comfortable fishing conditions of the year, I hope everyone can get out and enjoy themselves on the coast before it the weather becomes too cold.