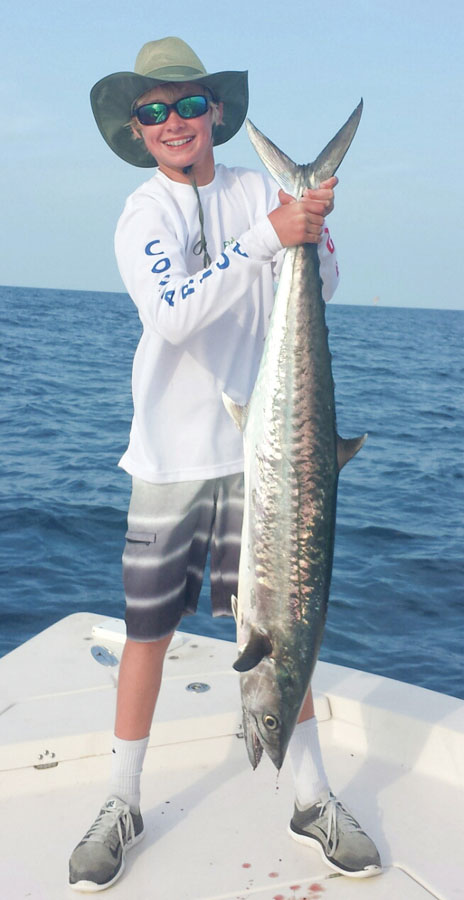 Dryden Taylor is all smiles with his big kingfish.
Dear Readers,

It's been about a year now since I began submitting articles to TSFMag. Everett and the staff have offered much-needed support, guidance and given me plenty of rope to work with. No hangman's noose yet, but there have been plenty of menacing loops formed.


Readers have provided some great feedback, welcomed criticism, and even some of my content was copied by a professional outdoors writer, elsewhere. With all being said I very much appreciate and enjoy the opportunity to share my thoughts, knowledge and experiences each month. Thank you for reading my column and feel free to contact me with questions or suggestions.

The mullet run is kicking off this month as it does every year. The decreasing daylight hours, cooler water temperatures and light frontal passages all signal this. The predator fish know and sense this as well. As the mullet schools congregate you can look to many of the local hotspots to find them. Many mornings I let my nose tell me where to fish, often the smell of big schools are strong in the air. Look to channel edges, rock groins, passes to the Gulf, water bodies intersecting the ICW, windward shorelines and water body drains for mullet schools.

Last September I enjoyed the best trout catching of the whole year. All of my efforts for them were strategized to take advantage of the mullet schools. Most mornings I started off with a chartreuse Heddon One Knocker Spook cast on the fringes of the bait. Bait schooling actions tell you where to place your cast, normally where fish are blowing up the bait or making them nervous moving through an area.

Many times the trout are feeding below the mullet on stragglers and also other bait that joins for protection in numbers. Shrimp and large glass minnows work their way into the group and are regularly pushed below the schools by the more plentiful mullet. Often when a topwater goes unnoticed I would switch to a natural-colored 1/4 ounce DOA Shrimp or a lightly-weighted soft plastic.

The DOA Shrimp is excellent when cast into the middle of the mullet and allowed to settle underneath the bait, to be swept with the current. Spinning tackles helps in the proper presentation of the shrimp, line can be played out "slack" with the current and worked with light twitches. The DOA Shrimp is also very effective rigged Carolina style with a 1/8 or 1/4 ounce slip weight, 24- to 30 inches up the line from the lure.

A 3-inch paddletail soft plastic on a 1/8 ounce jighead gets noticed for sure. I realized the best results while casting to the leading edge of the school and hopping the lure quickly which kicked up spurts of sand. Dark or natural-colored YUM Money Minnows and Hogie's Major Minnows caught the most and don't be surprised if a flounder bites.

It's no secret that this month redfish begin to school and move toward the gulf for their annual spawn. As the water level increases during the month, reds go on a wide-open feed along their chosen path to deep water. I target them where they move and concentrate along channel edges, secondary drops, and windward shorelines with concentrated mullet.

It helps to throw some chum in your area which helps entice the fish or slows them down as they swim nearby. Spanish sardines, menhaden and fresh mullet cut into quarter-sized pieces work great. I like to anchor the boat parallel to a drop-off or cast into shallower water downwind. Finding an area that has the wind, current and a channel edge working in the same direction helps bring the fish to you.

The same fish used for chum makes for great bait and mixing things up on different rods can increase your catches. Frozen Spanish sardines and menhaden are excellent redfish attractants but are very mushy and difficult to keep on the hook. I use small chum pieces on the same hook along with other dead baits to spice things up. Fresh dead shrimp, fresh cut mullet, cut pinfish and any combination live is good. On some tides one bait may out catch the others, so variety is often good.

These tasty, hard-fighting rarities can be targeted effectively in late-summer. The strong tides preceding the new and full moons get them feeding and concentrated. Sandy channels leading to the gulf, nearby areas with thriving grass beds and beach sandbars cater to schools. These fish are feeding on very small crustaceans the size of a pencil eraser, but readily pounce on live shrimp, brightly-colored Fishbites and "pompano" jigs bounced on the sand bottom. Getting the sand to "puff" up when a jig or lightly weighted rig rubs the bottom helps with the success.

Tarpon get a great deal of attention as they began to migrate back south for the winter. Many times the schools number in the hundreds as they travel nearshore. Moving slowly but steadily toward warmer waters, they occasionally make stops along jetties and natural passes.

Tarpon in general and especially when in large schools, can be very shy of loud noises. A running outboard motor can spook them into moving away or in the very least cause them to suffer lockjaw. Outboard motors have through hub exhaust which is very loud underwater, some say like a motorcycle on the highway. The only way to approach these schools successfully are to drift quietly into an area, use an electric trolling motor or a boat with above-water exhaust like an inboard engine.

Once in the area, the best offering is a "coonpop" style lure either cast and retrieved slowly near the bottom or slow trolled. Again, trolling should only be done with an electric motor or on a boat with inboard propulsion. A trolling speed of less than 2-knots is best, which allows for multiple rods to be fished from the stern and blind-casted from the bow simultaneously. Live bait is very effective, but the jacks, bull reds and especially the sharks normally get to it first.

Serious tarpon anglers very much appreciate other boaters and anglers keeping a distance of at least 1/2 mile while they are motoring. Each season we have bites ruined by boaters running up on us, being curious and not understanding the effect of these actions. There have been multiple books written on tarpon angling and more information online to help new anglers get into the sport. Please be courteous and respectful of other anglers.

The end of summer and beginning of fall make for some of the best times to get on the water. Each September the crowds begin to thin on the coast while many outdoorsmen concentrate on hunting and family activities that center around school-sports events. Now is the time for excellent catching opportunities, comfortable weather, and decreased pressure. Come join us on the coast if you can, I think you'll like what's going on down here.