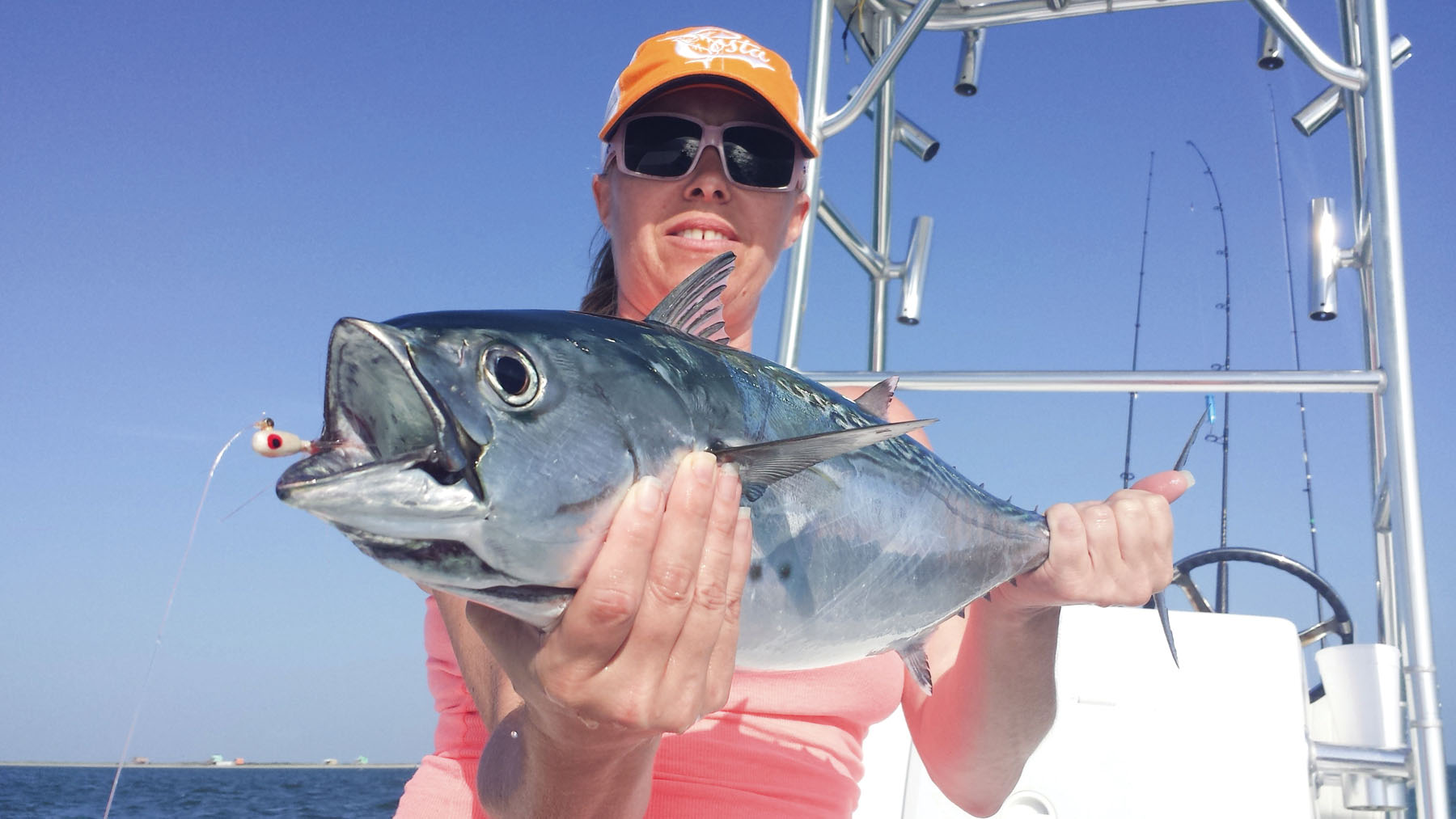 Meredith Cash with a double handful of little tunny- aka bonito. This brute was boated after a 10-minute battle on trout-sized tackle.
Each September we anticipate the arrival of the Autumnal Equinox with its cooler temps and decreasing daylight. A coastal transformation begins while these changes kickoff a time of transition for many fish. Some species move shallower, some deeper, some stage near passages to the gulf while others set a southerly course chasing warmer water temps.

With fall arriving you can expect finger- to hand-sized mullet starting to leave bays as early as the first days of the month. Many ride the daily tides while occasionally being swept into the surf where game fish are eagerly waiting. The mass exodus of this migration normally follows later in the month. My friend Mark Mohr refers to these mullet as "candy bars" because everyone likes them. I can't think of a more delectably inviting description of these game fish favorites.

Dusky anchovies are hitting their peak numbers in our nearshore waters and the size of the bait shoals increase dramatically this month. As much as bay and inshore game fish enjoy candy bars, most other nearshore fish adore these tiny "Red Hots" even more.

I've seen very large sharks, kingfish, Spanish mackerel, bonito, bull reds, cobia, jack crevalle and tarpon gorging simultaneously in the same shoal of anchovies. I would have previously thought the apex predators were there targeting smaller game fish attending the feast. Not quite correct though; when the cloud of little red fish were all vacuumed up, they all left together, peacefully heading to the next bunch nearby.

When the current pulls these bait clouds near oil and gas platforms they get absolutely clobbered. Red and mangrove snapper come up top to join the blitz of bluefish and Spanish mackerel although the snapper rarely oblige an artificial offering when this is going on. Terns and bonito birds hopping across the surface are a dead giveaway for the anchovies' location. Smaller fish like Spanish mackerel and bonito can be caught readily on 1/8 ounce speck rigs, with pink and bright orange colors getting most bites. Might be a good idea to offer a "candy bar" to the bigger fish, considering the general liking they display for mullet.

Slot-sized redfish start coming off the flats and sandy shorelines to gather and move toward the gulf. Look for increased numbers of redfish to situate themselves near deeper transition zones than normally found. It is not uncommon for large schools to congregate around grass beds and shell reefs in water with five foot depths or more. Many times there will be patches of muddied water on the open shorelines in the bays where they are feeding. Often they join schools of black drum making double the fun once found. In the deeper water, dark-colored soft plastics or dead shrimp threaded onto a 1/4 ounce jighead or a 1/2 ounce silver spoon slow-rolled through the school gets bit. Look for the schools to become concentrated nearer the gulf later in the month.

Nearshore Submerged Structure
September is an excellent month to fish shallow wrecks, reefs and submerged wellhead obstructions. These types of structure really come to life with the fish in transition.

With the majority of state water depths running 70 feet or less, most bottom structure will host a variety of species. Red snapper, mangrove snapper, kingfish, Spanish mackerel, shark, cobia and bonito are all available. Worthy of note; larger red snapper start migrating into state waters and mangrove snappers will congregate in the 40 foot depth range, peaking around the full moon.

There are many commonly known structures found in Texas state waters. Most Texas offshore fishing maps as well as some books published on Texas waters can provide plenty of numbers to input into your GPS.

One of the best methods of finding fish in these areas is by drifting. This method is similar to targeting trout on a deep bay reef by casting jigs downwind and also by dredging natural baits behind the boat.

For casting I like throwing a 2 or 3 ounce white bucktail jig or similar-sized leadhead rigged with a soft plastic on a 36 inch leader of 60-lb mono. These jigs work equally well cast and retrieved with an exaggerated hop along the bottom or jigged vertically directly below the boat. Tipping the jigs with peeled shrimp, a squid head or a fresh baitfish strip always helps.

When drifting baited rigs, I normally deploy two or more upwind in the boat's driftsome with and some without weights. Rods are secured in rod holders and reels are set on a light drag with clickers engaged. The light drag helps to keep hooks from pulling during a quick bite from a fast-running fish. One rod has a Carolina rig with 36 inches of 60-lb mono leader, a 5/O-9/O Mustad 39941 circle hook (depending on bait size) and an egg weight of size chosen for the wind and current. Weights need to be heavy enough to allow for occasional bottom contact, but not so heavy that the bait constantly drags bottom. The non-weighted rigs will have wire leader with a live or dead finfish attached. If the non-weighted rig contacts the bottom, either reel it up a bit shorter or attach an inflated balloon the size of a grapefruit. Attach the balloon to the main line with two stacked square knots at a distance from the bait of approximately one half water depth.

Many different baits can be used, ribbonfish are deadly as well as live baits such as croaker, pinfish or mullet. Whole bay squid 3- to 6 inches long work very well on the Carolina rig due to the toughness of the bait keeping smaller fish and the occasional bottom bounce from knocking it off.

The use of a drift marker and fresh chum of frozen sardines can really increase your odds of boxing fish. I make drift markers using empty 16 ounce soda bottles, 70 feet of 30-lb mono and a 16 ounce bank sinker. Make several markers to use in the area, sometimes you can bounce from marker to marker to keep the bite going. Always pick up your markers before exiting the area. To keep from tangling slack marker lines in the propeller, casting and snagging the line with a jig simplifies the retrieval process.

Nearshore shallow wrecks and wellhead debris many times are strewn about being broken and scattered due to wave or storm action. These smaller almost undetectable pieces sometimes hold the larger fish and the best way to find them is while drifting. When a good bite is felt or a fish is hooked a marker is tossed over along with a couple handfuls of 1-inch chum chunks. The marker allows for returning to the chummed spot. Casting a jig back toward the marker often results in multiple hookups. Continuing to drift in the main vicinity of the main structure can result in multiple species caught. Being that the water depth is relatively shallow, anchoring within casting distance, up-current and/or up-wind of a marker is recommended. Light chumming can only increase your odds of success.

Get out there this month and look for candy bars, Red Hots and schooling fish. High fives and big smiles are sure to be shared among your crew.