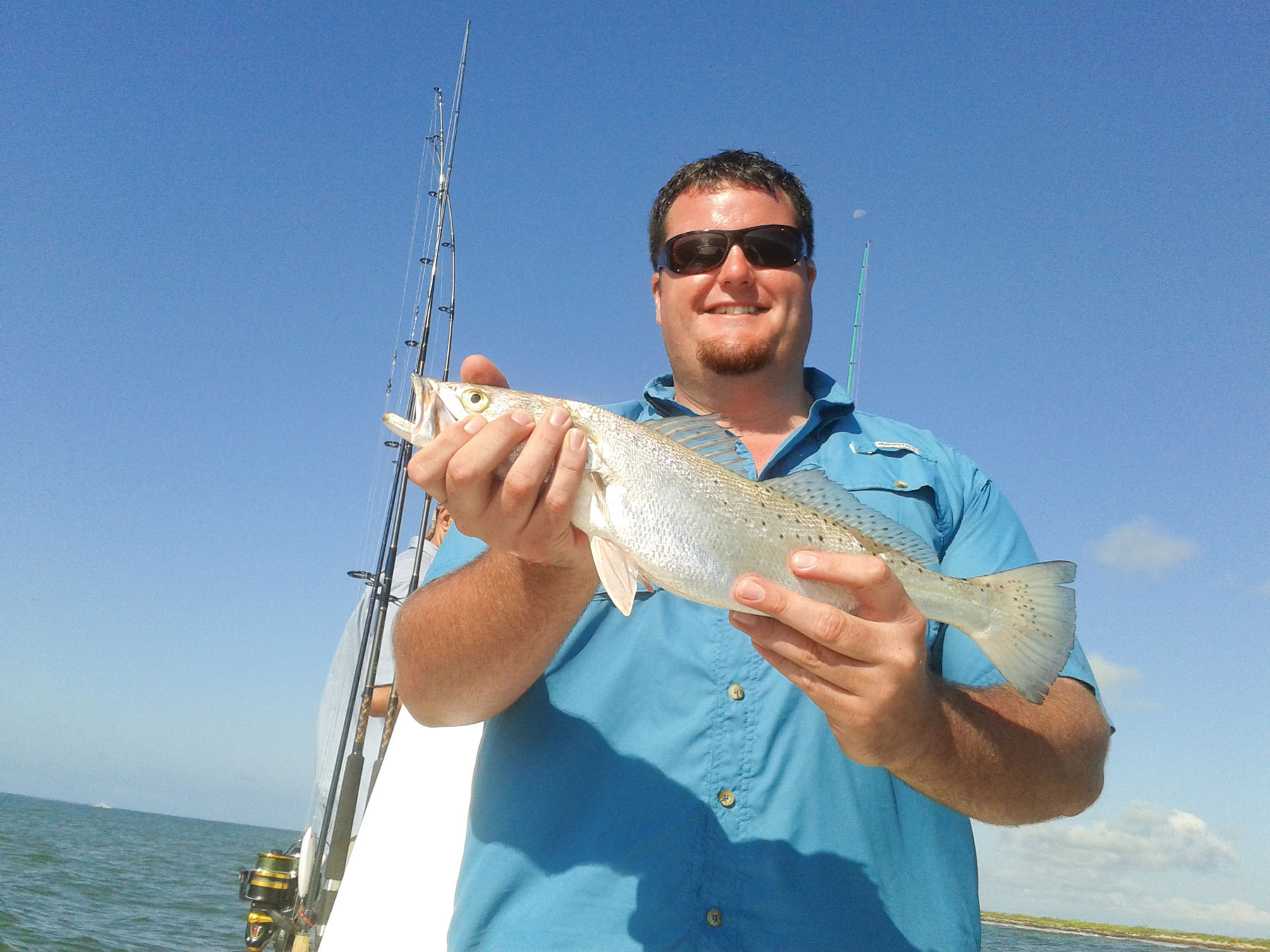 Towering over this 23
JETTY KINGS

June typically offers reliable inshore kingfish action. These fish can often be found near the line of demarcation at ship channel jetties and gulf passes. Nearshore currents and tidal forces align kingfish and their prey along current seams and tide lines. Current seams are the defined lines of flow near deeper channel edges or other major changes of depth. To locate seams, look for notable changes of color and clarity and also lines of floating sargassum, man-o-wars and schools of bait.

Swift currents overwhelm smaller finfishes, pushing and pulling them along the seams where they commonly school. Congregations of bait make easy prey for slash-and-dash feeders. Mackerel knife through forage at high speed, snapping at all in the path. They often slice prey in half only consuming part, leftover pieces sink quickly, consumed by school mates or other opportunistic feeders.

To key in on peak feeding periods look for days with good current flow. The new and full moon phases always produce the strongest and longest duration of tides. Choose a couple of days prior, the day of and soon after each phase for prime times.

When favorable weather conditions occur in conjunction with strong water flow the odds of scoring increase. I typically watch the weather forecasts and look for a string of days with light wind. I prefer incoming tide that peaks in velocity around mid-morning. Fresh green gulf water is normally clearer on a flood tide where the kings feed in the strong current. Many ship channels will have a shoal between the main center channel and the bordering rocks. These shoals have high spots that impede the current flow and cause upwellings. Hapless bait is pushed to the surface and kings can be seen skyrocketing through them.

Topwaters catch lots of surface feeding kings and I like the 5" Heddon Chug'n Spook rigged on a 10 inch trace of 58 pound wire. Imitate a spooked ribbon fish skipping across the water with trout-class tackle by ripping it about five feet and then resting it five seconds. Most strikes come on the pause but can happen any time, use caution as the lure nears the boat.

Many times I move toward the bay as the current increases following the feeding fish. With favorable weather, kings will often swim into the bay on the stronger incoming flows.

Sensing the slackening of flow after the peak, kings will turn back toward the gulf. Being out of full feeding mode, they now seek the easiest route. The tide is still coming in, but on the channel edges there will be backflow eddies, kings like to snack on the edges of these eddies while riding the current.

You can catch fish on an outgoing tide, but the schools tend to scatter as they move back into the gulf. One benefit from the ebbing tide is that the seam has a very defined color line to follow. This color line forms excellent structure to be used as camouflage for bait as they are swept from the bay. Instead of fishing in the heavy current with turbid water, move to the calmer clearer areas.

Along the seam look for sharp turns or bends in the flow, these areas could be upwellings similar to those found inside the jetties. If slow trolling natural bait I like to shift into neutral to drift or bump troll slowly to keep the lures away from the propeller. This is a good time to blind cast some lures, if fish are nearby either method will prove it. If you have a strike or hookup, turn back around and make another pass.

On either tide direction I use similar techniques. I normally start out fast trolling a couple of lures, one deep like and a surface runner. To get deep I use a Bomber CD25 or similar to get down 15 feet or more. To tempt fish nearer the surface a chrome Cotton Cordell Red-Fin or a chrome #18 Pet spoon are excellent. Each of these lures flash, wiggle and gyrate on or near the surface. The bites on the Red-Fin are explosive and the kings may blast up into the air 8-10 feet.

A pass down a current seam near the center of the channel will let us know where to start. Many times trolling at 5-mph or faster, fish can barely miss the hooks, a quick buzz of line off the reel or a bounce in the rod will tip us off. If you troll through a large school or if they are on a blitz a solid hookup is almost guaranteed.

I start bump trolling natural bait if the current is running light and still ramping up. Ribbonfish are the Texas favorite, I believe, and very hard to beat. Hand-sized menhaden are a very good choice as well as croaker. Dead baits can be trolled or drifted but live baits on the drift can be deadly. My favorite rigs are one live menhaden or two live croakers hooked individually near their tails. The croakers put out bright flashes and vibration fighting against each other. Each of these baits are especially good cast into upwellings and on the edges of backflows.

Personally, I like to use two hooks only on my bait rigs. A pair of #4 Mustad 3592HD Kingfish trebles rigged 7 inches apart keeps toothy fish attached. Adding a couple of feet of 40-60 pound single strand wire ahead of the hooks gets the most bites. Egg weights from 1-3 ounces can be slid in front of the #7 black barrel swivel for additional depth. Three hooks work almost too good at snagging, especially anything within its reach if not embedded in the fish.

The federal-water red snapper season (beyond nine miles) opens at 12:01 AM June 1st and runs for ten consecutive days. Not much time for the recreational angler to get out there. With only two days falling on a weekend please try to go for a thinning of the herd before it closes.

Catching a limit pair of "keeper" snapper is pretty much a slam dunk. They are bountiful in just about any area you choose near structure deeper than 80 feet. For fun each year, friends and family go with me during this special season. Last year and as many as I can remember, limits were incredibly simple to obtain. In fact, last fall while targeting grouper, the red snapper were so thick on most structure that the grouper never got to the bait. We were releasing red snapper over 30 inches on 15 inch live blue runners.

June usually kicks off the surf run each year with periods of calm wind. I run the beach looking for an area with abundant brown pelicans and gulls grouped at the water's edge. This normally means bait is in the first couple of guts where trout and reds are running them up on the sand.

Washouts between sandbars perpendicular to the beach and areas with obvious rip currents make good ambush points to target. A live croaker hooked through the roof of the mouth and out the bridge of the nose works like magic. Carolina rigged with an egg weight heavy enough to barely hold bottom and a 5/0 Mustad 37160 "Croaker Hook" puts them in the boat. If it's redfish you're after, go heavier with the egg weight and toss a live pinfish into the first gut and hang on.

Grab a bag of ribbonfish and a few dozen live croakers and head to the rocks, surf or deep structure. The strategies outlined here should make catching a slam dunk in June!