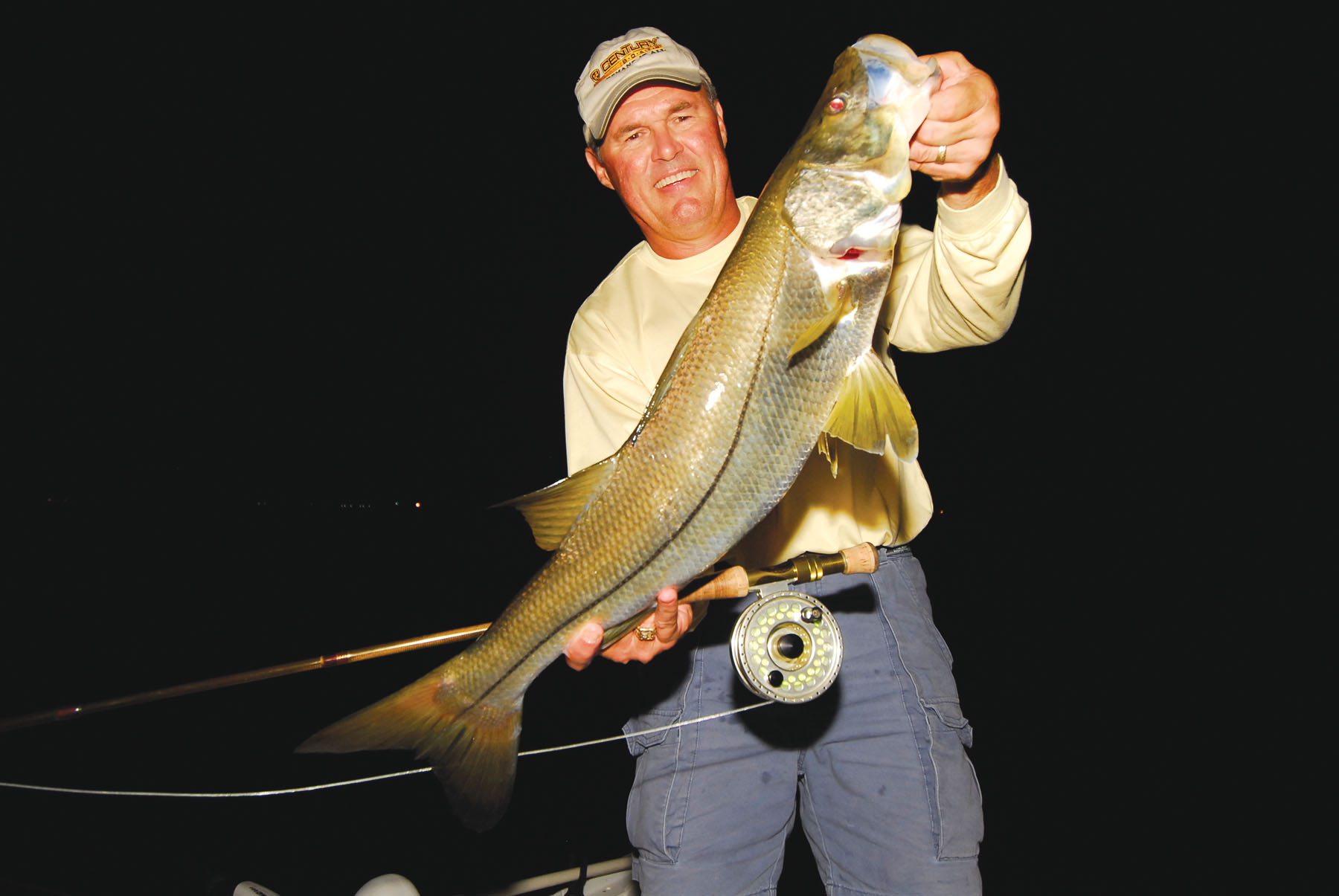 Last summer I had the chance to hook up with my good friend and fellow guide, Mike Conner, for an evening of tossing flies against the bridge pilings and piers near Stuart, Florida for monster snook. It had been something that I wanted to do for a long time and I was quite excited that it was finally happening.

Incidentally, it was by the good graces of the illustrious editor of this publication, that it even happened at all. He had asked me to go, on his behalf, to the D.O.A. Outdoor Writers Festival and come back with a good story to tell and boy, did I ever come back with a story. But what you all read (hopefully) in the issue last August was only half the story. You see, there was no way that I was going over to Florida to only throw plastic baits at fish- I needed to chunk some hair and feathers. So, I called up Conner and we compared schedules and luckily for me, it all worked out.

The late afternoon before the event, I pulled up in Conner's driveway to find him hard at work loading the boat for our excursion. After a few pleasantries, I uncased and assembled my fly rods. For this trip I decided to travel with what I consider to be one of my "lucky" rod and reel outfits- a G Loomis Crosscurrent 10-weight with a Tibor Riptide reel. I figured I only had one evening to catch my biggest snook ever, so I needed all the help I could get. This particular rod and reel combo had served me very well over the last few years on tarpon. I put on one of Conner's hand-tied little-white Mid-Nite Mullet flies and loaded the rods into the boat and we pulled out of the driveway just as the sun was setting. Within a short time I heard the click of the switch that ignited the running lights and the hum of the starter. We were underway and making way. I was jacked to say the least.

After a short run Conner brought the skiff off plane and dropped the trolling motor and began casting to the pilings. I followed his lead and before long my fly line stretched tight. Now I have to honestly say, I was not prepared for what happened next. Sure, I had caught some pretty good snook in my time but, they all came from the shallow shorelines of the Everglades where the fish do not have the opportunity to head for deeper water and into the unseen pilings below. And, my idea of what constitutes a good snook was about to change dramatically.

Once hooked, my first fish immediately headed for the depths and towards the bridge pilings. Needless to say I was not ready for the pull and I pretty much spazzed out. Seconds later the intense bend of the rod relaxed and the line went limp. After letting loose a few colorful comments and taking a good ribbing from Conner, I regained my composure , rebuilt my leader and raided Conner's fly box. But, before I could get up and cast again, Conner was fighting a fish so I set my rod down and landed his fish for him. As I lifted the 36" snook from the water I knew the evening was only going to get better. And, did it everIn just over an hour we landed several 34"-36" snook, all of which I considered good fish. Then, later that night, it happened!

I felt the take and made a decisive strip-strike and then rotated my body to drive the hook home. Then, after what can only be described as chaos, I did everything I could to gain control of myself and then the fish. I had no idea that a snook could pull so danged hard. Let me tell you, there was not a single molecule of graphite in that Loomis rod that did not feel the strain of me pulling against that fish. The rod was flexed from the tip all the way to the butt cap and I had the reel drag as tight as I dared. It was all I could do stop it, but eventually, I won out and the fish came up to the surface thrashing wildly.

I still can remember the joy that I experienced when Conner lifted the 39" snook from the water- by far my largest. And, if that is not enough, I got the chance to land a 42" fish for my friend and we both hooked into a couple of brutes that we could not turn. It was truly an amazing night of fishing.

After that remarkable experience, I would almost be willing to bet that whoever came up with the idea to scare little kids with the legend of a troll that lives under a bridge was a south Florida snook fisherman. Big, green and mean is the only way to describe them. I would recommend the experience to anyone.