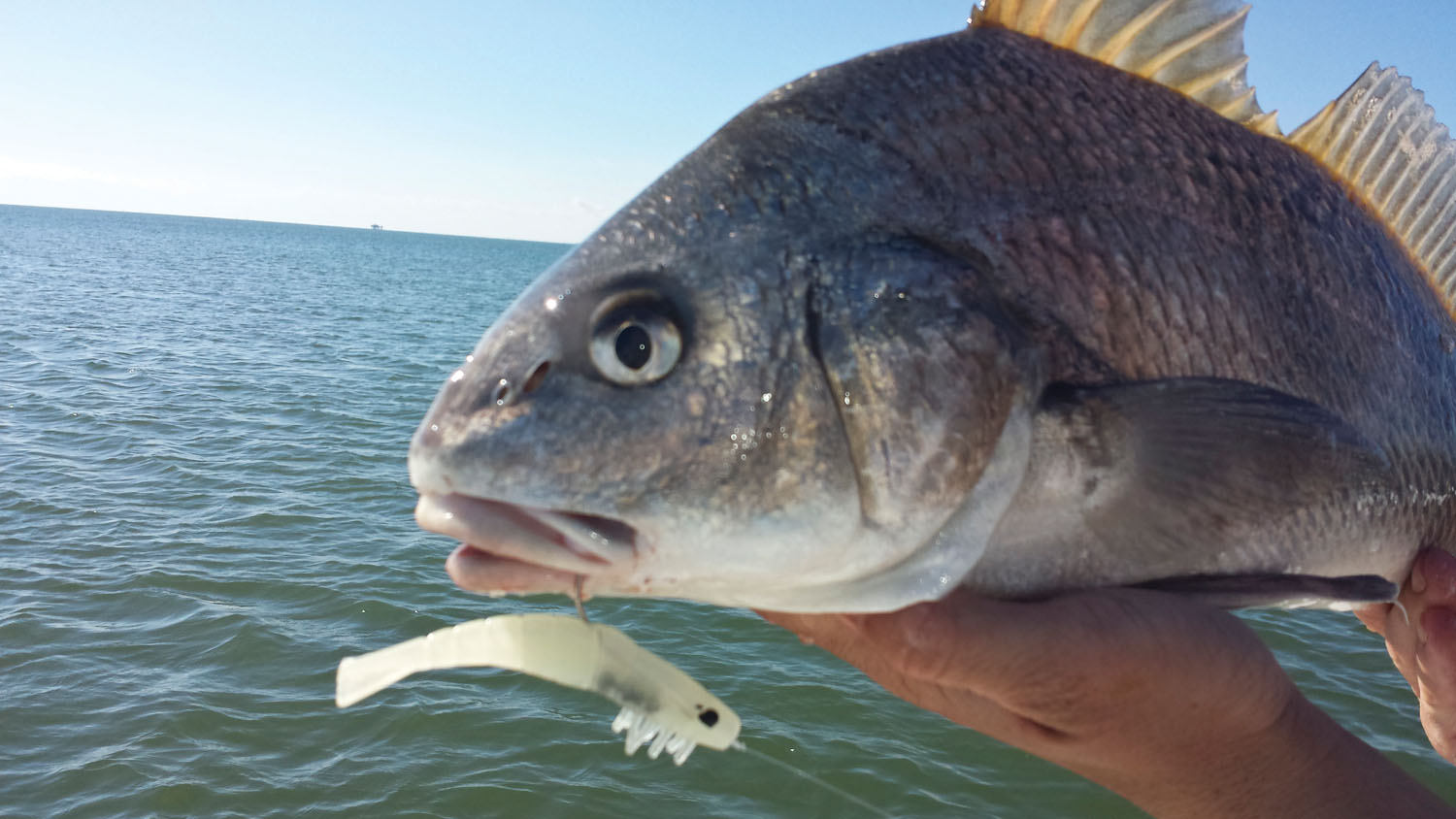 Every coastal fisherman in the Lone Star State has no doubt heard of the "Big Three," or maybe by its other popular name, the "Texas Bay Slam." These names refer to the accomplishment of landing a collection of at least one legal-size specimen of three inshore species: speckled trout, red drum and flounder during a single outing.

But what about the one I call, Number Four? Texas's other salt water drum. Why has this species historically been given the Rodney Daingerfield treatment?

Until recent years the black drum has been bringing up the rear in Texas coastal sport fishing, inevitably in a dead heat for fourth place with all other bay species. Ask any hook-and-line commercial fisherman and they'll tell you that's fine with them, for sure. They've been keeping this fishery hush-hush, and for more or less good reason.

I started fishing for them on a regular basis about six years ago to supplement an often lighter box of fish. Boat fishing for trout was becoming more difficult with ever-increasing angling pressure and an already stressed biomass. It didn't take long for me to notice that the commercial guys were targeting black drum. They were catching loads of them on trotlines baited with wooden discs soaked in WD-40 lubricant impaled on an 11/O circle hook.

The black drum is a crowd pleaser, though. Excellent table fare, fun to catch and found in schooling masses. What more could an angler ask for from a hearty fish like this? Only partial willingness to take an artificial lure or fly is what you'll hear from the A-Team, most likely. In some ways, depending on the situation, this makes them even more interesting to me.

The black drum becomes sexually mature at approximately 12 inches and two years of age. My friend Shannon Tompkins says, "They are like the feral hogs of the bays, the more you stress them, the more often and better they reproduce." You can find them in all Texas bay systems, from the fresh water deltas out past the confines of the Texas state waters offshore, and everywhere in-between.

Slot sized black drum have flaky white meat fillets and their diets consist mostly of mollusks and crustaceans. I personally think they taste much better than any redfish, no matter how you cook them.

Last year, late-February and through March, I was able to target large schools of spawning drum on San Antonio and Matagorda Bays. On the calm, post frontal days we found groups that numbered in the thousands on shallow open bay oyster reefs and spoil islands.

The reefs held clear water due to the mollusks' fine filtering capabilities, and the typically light winds experienced on bluebird days. The clarity was perfect for locating and targeting these 28-44 inch long fish. They could be easily seen in meandering schools measuring hundreds of yards in length and with a breadth and depth of 4- to 8 fish.

On days when the water was more turbid I looked for freshly mudded spots or boils. Often the schools would be found on the lee side of the windblown structure. On the spoil islands, I would concentrate on the lee areas closest to the ship channel drop-off. Many times this area is muddy from barge traffic. Target the calm areas directly adjacent to the tugboat generated current. Large fresh-dead peeled shrimp, whole sea lice, and cracked crab seemed to work best in these areas.

As impressive as these schools were to see, the catching was even more phenomenal. A lightly-weighted piece of shrimp or crab tossed near a school guaranteed an immediate hook up!

Catching black drum on artificial baits is difficult, but these fish educated me how they wanted to be fed. This was especially beneficial when using light-tackle and soft plastic lures or flies.

With the clear water offering ideal sight-casting conditions we were able to fine tune an effective strategy for using various artificial lures. The key to hooking up consistently was to cast alongside the group of fish with a natural-colored DOA Shrimp and reeling it slowly near the surface intersecting the swimming school. Once a fish takes notice by turning its head toward the lure, the angler needs to pause. These normally docile fish won't chase a bait very far, so immediately quit reeling to decrease pressure, or free spool the line.

Medium-heavy spinning tackle works extremely well as you can cast light lures and then quickly offer slack line with a flip of the bail. In addition to the reel benefits, the heavier rod blank has the backbone to help control heavy fish boatside.

As the 3" or 4" DOA shrimp slowly descended it would rarely make it more than a couple of feet before the line would come tight. Please note that it may be best to set the hook with a slow sweeping action to help pull the fish away from the school. This will allow for multiple hookups by not spooking the rest of them. Once the fish gets away from the group, a sharp pull will get the fish to fighting, helping to wear it down in preparation for an effective release.

What a fun tactic and a great change of pace targeting these big fish. I imagine these same tactics can be used in most other Texas estuaries, bays, jetties or passes.