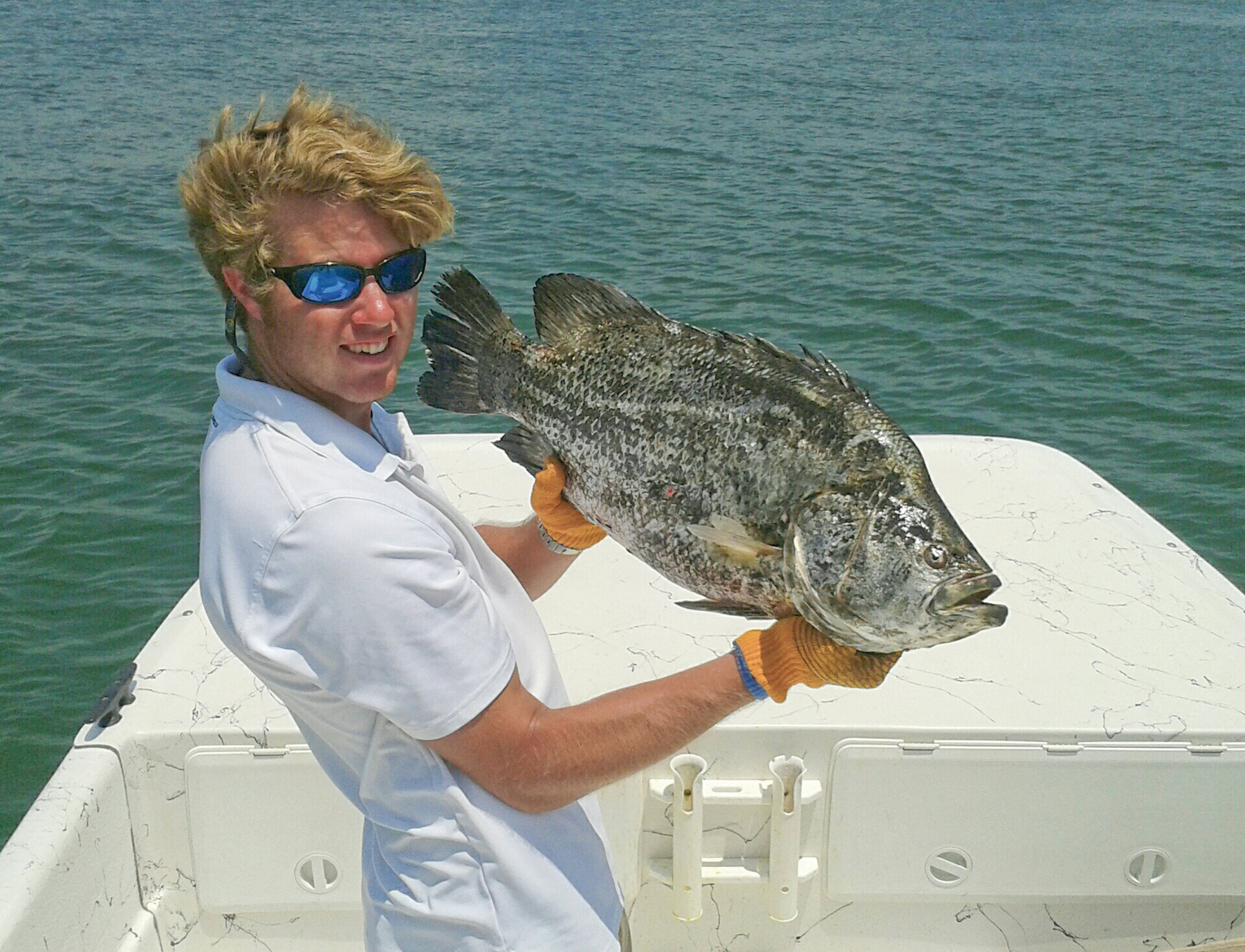 Several years back my wife, Meredith, decided she would like to catch a tarpon on Mother's Day. Over the years she has hooked, jumped and battled many tarpon without success. Trying to accommodate, I prepared to do my best to make that happen.

The next morning could not have offered better conditions to target them off the beach. We soon found ourselves in 25 foot depths of clear-green water and huge schools of menhaden. Other than the occasional surface explosion from feeding predators the water looked like a mirror.

She was blind-casting lures and standing vigilant for the rolling fish that never showed. We had both willed them to be there but, they were being tarpon and not cooperating.

To save the day I pulled out the big cast net and filled the live well with 8-inch pogies. Action was now fast and furious but an hour of repeated tug-of-war with jacks, sharks and bull reds took its toll. Meredith was exhausted, needing a cold beverage and a rest from the hot sun.

She urged me to fish while she recuperated but I did not want to take away from her day. After a few minutes I agreed to one cast. As I stepped up on the bow the strangest thing happened. Up from the depths a large tarpon emerged and swam to the boat like a dog expecting a treat. I turned back to tell her, but thinking it was a joke, she chuckled while telling me to catch it!

After multiple jumps the six footer was alongside within twenty-minutes due to expert boat handling by my bride. Meredith snapped photos while I revived the first tarpon of the year. Once released, I ran to the front deck to dance about while singing "Happy Mother's Day to Me!"

Meredith enjoys telling this story, but due to my end zone antics I'll never live this one down. Maybe this year she'll seal the deal on Sunday, May 10.

For me, May is the month I start getting back into my fishing groove. Catching slot-sized trout, reds and drum during the cooler months is a hoot, but the big fish and variety really get me going.

As the water temperatures and levels rise, the quantity of forage and predators increase. Many seasonal fish make a showing in larger numbers this month. Tarpon, ladyfish, shark and trout began to work the shorelines littered with fresh forage.

In the open bay and near areas with gulf water exchange, the jack crevalle, bull reds and tripletail ride the tide lines and currents. I always say, "Find the current, find the bait, find the fish!"

Gulls and terns will be working shoals of shrimp pushing out of the bays on ebbing tides. New forage of juvenile ribbonfish, menhaden and anchovies will be riding on flood tides getting the birds attention. Trout, redfish, ladyfish, gafftop and jacks will be nipping at the tails of the baitfish schools.

To successfully target multiple species my daily operation and techniques change up quickly. I realized long ago that being prepared and geared appropriately enables me take advantage of each situation. To support this effort my arsenal is increased with another half-dozen rods and reels and thirty pounds of lures, weights and terminal tackle. All this gear is not needed daily, but depending on fishing conditions and species available it all has its time and place.

My go-to tackle consists of what I call light spinners, casters, medium-heavy spinners and heavy conventional.

Casters are 250 or 6000 series round baitcasting reels, lined with 20-30 pound mono and mounted on 7-foot parabolic medium-action rods. These combos work well fishing vertically at the jetties, fishing heavy structure (docks, platforms and artificial reefs) and "tight lining" for redfish. When fished in a stationary position the slow-action rod actually increases the circle hook's effectiveness. With the outfit placed in a rod holder with a taught line, this hook is allowed to slide through the mouth to penetrate the corner of the jaw. Hook-setting success rate at 90+% is common with this method.

The heavy conventional combos consist of lever drag reels. I prefer the Shimano TLD 20, lined with 40-pound hi-vis monofilament on 7-foot 20-40 pound standup-style rods. These combos are used while drifting for sharks and tarpon in the bay, jetty and near shore. Heavier tackle like this is used often at the short rigs and reefs nearshore when the size and species of fish may vary considerably.

LADYFISH- Easily one of my top five to catch. They put up a great fight, feed in schools and make some of the best cut bait. You'll find them on the edges of current flows and in open water feeding on schools of shrimp. Any kind of lightweight lure will catch them, speck-rigs work great.

Once caught, use them in "steaked" chunks one inch wide for reds on the flats and three inches wide for bull reds. With the tail removed, a ten inch section with the head for shark. Filleted, cut and trimmed to one inch wide, one half inch thick and two inches long strips for trout and flounder.

TROUT- Bay shorelines with significant secondary drop-offs are the areas to target. Finfish will be a more important food source now with the influx of finger mullet, shad, glass minnows and croaker.

REDFISH & JACK CREVALLE- These totally unrelated species will be situated in and around direct access to strong current areas. Jetties have a significant water flow that transfers and concentrates food sources. Incoming tides pull baitfish near the bottom, with ship channel ledges producing upwellings concentrating bait on the surface. Look for bird action near current for jacks on top and reds underneath.

TRIPLETAIL- Slowly moving into our bay systems this month, individual fish may be seen. They can be found coming through jetties and passes from the gulf, as well as open water near ship channels.

NEARSHORE- Kingfish should be moving into shallower water this month. Depths of 50 feet seem to be the minimum unless there is clear-green water pushed in closer toward the beach. Cobia will be lurking in small groups near sargassum weed and petroleum platforms. Bonito and Spanish mackerel will be in the same areas as kingfish, look for diving birds for schooling fish.

May is a great time to enjoy the coast before it gets scorching hot and the summer crowds arrive. While you are here try a new area or tactic each trip to broaden and enhance your experience. Always remember that a change in the lineup can give a player a new perspective on the game.