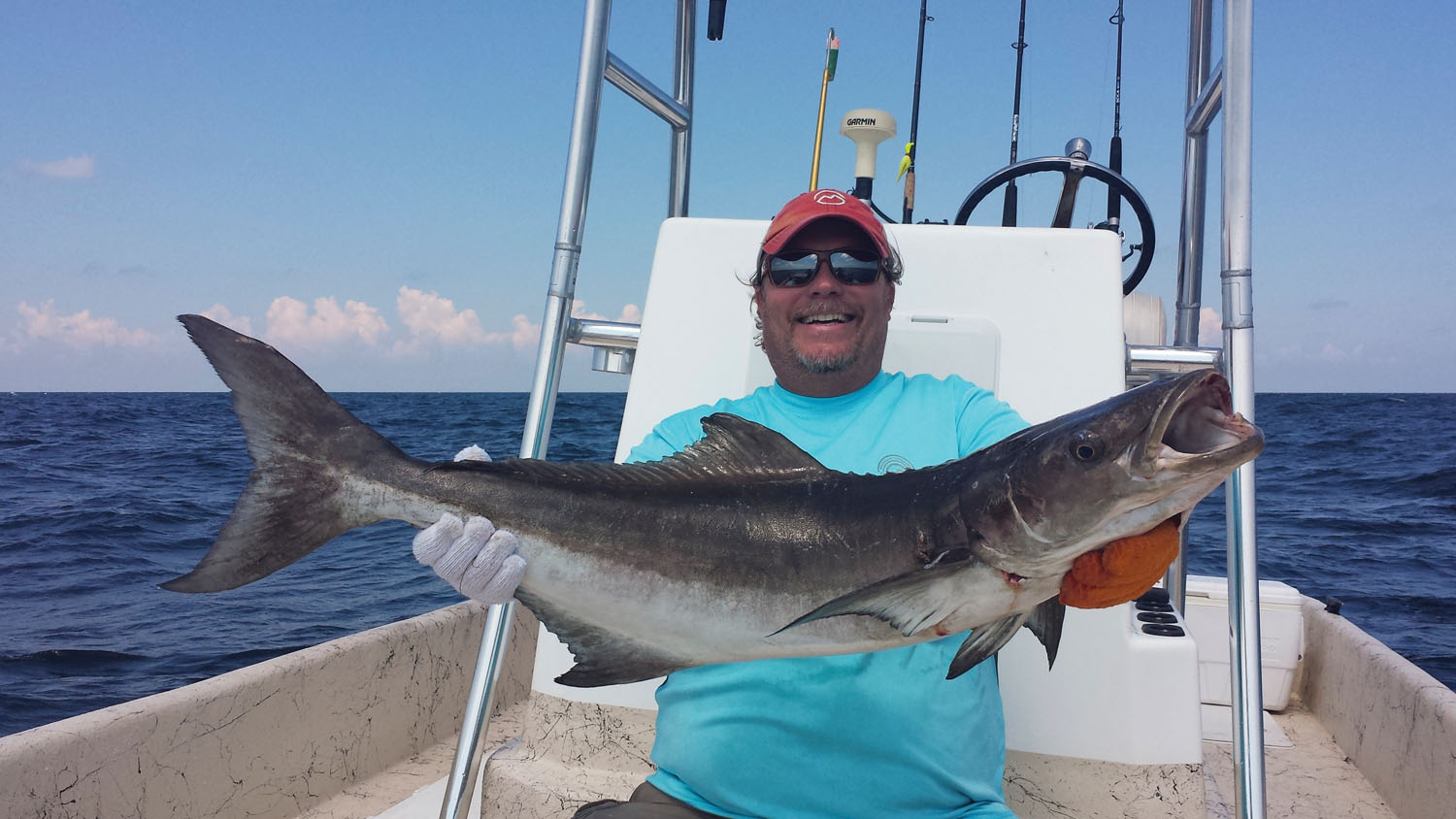 James Shands is all smiles with his first-ever nearshore cobia. James had to apply maximum pressure to keep this fish out of the nearby structure.

I've heard my whole life that eventually everyone turns into their parents, looking, acting, and even thinking like them. Yes, I'm turning into my dad in many ways, just ask my patient wife, Meredith.

On the other hand, I also find myself identifying with that grouchy old man at the end of the street that I grew up on. He'd scream at me, the Konarik brothers or other kids anytime we got near his yard. What a jerk!

I now realize that he was only protecting what he held dear his hundreds of square feet of perfectly manicured St. Augustine grass. We never intended on tearing up his yard, we just didn't know any better, or sometimes in too much of a hurry to care. We'd race our bikes across to shortcut the corner and loved to play Frisbee on that cushy lawn when he wasn't home.

Mr. What's-his-name never took the time to stop and explain to us what we were doing wrong and why we should be more considerate. Apparently it took him many years to get his lush lawn in such lush condition, and a short time for us kids to mess it up. Finally, he put up a fence to keep us out. Problem solved.

I'd like to say we would have all understood his message and voluntarily respected the grass, but then there were the McDonald twins. They lived on the block over and did not respect, give a care, or have the ability to understand any wrongdoings. Let's all hope that fences will not be going up any time soon restricting us from areas that we all hold dear.

July typically kicks off the mosquito fleet's nearshore fishing season. The wind typically calms down this month, barring any unwanted tropical disturbances. These welcomed conditions will allow many inshore boaters opportunities to break out to the other side.

In Texas state water (inside nine nautical miles) it is common to target and find kingfish, Spanish mackerel, little tunny, cobia, red snapper and a variety of sharks. Most major ports along the Texas coast have nearby structure such as oil and gas platforms, shipwrecks, artificial reefs or a ship anchorage.

Often overlooked are the large ships anchored offshore from the ports. These lie in wait sometimes many days to be shuttled inshore to port. They offer significant structure in the forms of the wave and current breaks as well as long shadows cast from these huge vessels.

I like to approach the ships from the down-current side. This gives me the chance to observe the crew in case they are conducting maintenance, drifting fishing lines or ropes off the sides or stern. Most of these boats are from foreign countries with occupants of many nationalities and you never know how hospitable they may be.

Mostly they are friendly and glad to see people other than their shipmates. Kind waving and words toward them may have them willing to point out schools of fish from their high vantage points. Offering some of your catch or a bag full of snacks or sodas is a nice gesture in return. These guys normally have a small diameter rope nearby to drop down to you. The leeward side of the ship is the best approach for any handoffs or communications near the gangplanks.

Extra sabiki rigs, smaller hooks and old spools of 20- to 30-pound monofilament line is especially appreciated by the crewmen. At night, many of the shipmates lower droplights with incandescent bulbs attached to extension cords toward the surface. These lights really attract the bait around the boat, I assume they keep what they catch for food.

Sometimes these folks are not so nice. I've had them fling stuff off the ships and yell at us in broken English to leave. Almost every time they yell at us, "No feesh, no feesh," there are actually cobia, dolphin or shark lingering nearby that the crew have been targeting.

Within hours of anchoring, baitfish congregate near the ships seeking reprieve from currents. Baitfish schools tend to be on the down-current side or near the anchor chain. Fresh live bait can be had by jigging Mustad Piscator #6 sabiki rigs in these areas. You'll catch various small jack species, cigar minnows, Atlantic bumper or threadfin herring. Immediately upon catching them, hook one on a light steel leader and free-line them near the ship. And then hold on!

I like to slowly cruise around the ship on first approach looking for occupants and signs of fish before starting a slow troll. Cobia like to linger near the stern, suspending around the drive gear on the underside. Being curious, they will normally ease out to look you over and often you'll only have one shot to hook up. Ready yourself with a stout hook baited with small crab, live croaker, large shrimp or a ribbonfish. Make sure your tackle is heavy enough to muscle these strong-willed fish away from their refuge. If they swim off uninterested, toss a couple handfuls of chum or thrash the water's surface with a gaff handle, whipping up a froth to imitate feeding fish. This usually gets you a second shot so be prepared.

Once I've checked out the situation on and around the ship, we'll start a slow troll. Ribbonfish work especially well in this situation, rigged weightless as well as lightly-weighted with a couple of ounces lead to keep it running a few feet below the surface. I prefer to troll at 3-5 knots with unweighted bait farthest from the boat, approximately 120 feet back, to keep it under the surface and not spinning. The weighted bait should set about three-fourths the distance of the weightless rig to lessen the possibility of lines tangling during turns. Run the weightless bait out first to minimize tangles on the drop.

Occasionally I'll bump-troll by shifting the engine in and out of gear to allow the baits to sink. On the up-current side I let out 50 or 60 more feet to allow the baits to sweep under the hull. After a minute or two of this it's back to steady trolling speed while rapidly reeling the unweighted bait back to the normal fishing position. This is when many of the strikes from kings will occur, while the bait is escaping at a faster rate.

Two or three circles of the ship should let you know what might be lingering there. Before leaving I like to make one final drift down-current from the ship by approaching with the current at my stern. Putting the engine in neutral about the time the baits are nearing the end of the ship is a good technique. This is also a good time to toss out a handful of shiny chum like cut ribbonfish, sardines, dead croakers or whatever you may have on hand. Doing this every 100 yards or so for the next quarter mile may get the attention of the kings schooled down-current of the ship.

Don't be surprised if a variety of fish hang with these ships, especially if large bait schools are nearby. I've hooked and lost sailfish and caught decent dolphin near ships within sight of the condos dotting the Port Aransas beachfront. Lots of cobia and hammerhead sharks frequent them also. I almost omitted the mention of them, thinking to reserve more for me and my charters. LOL!

I hope everyone interested in fishing outside the bay gets their shot this summer. Please keep in mind that the grass can appear greener on the other side, especially when you cannot get to it.