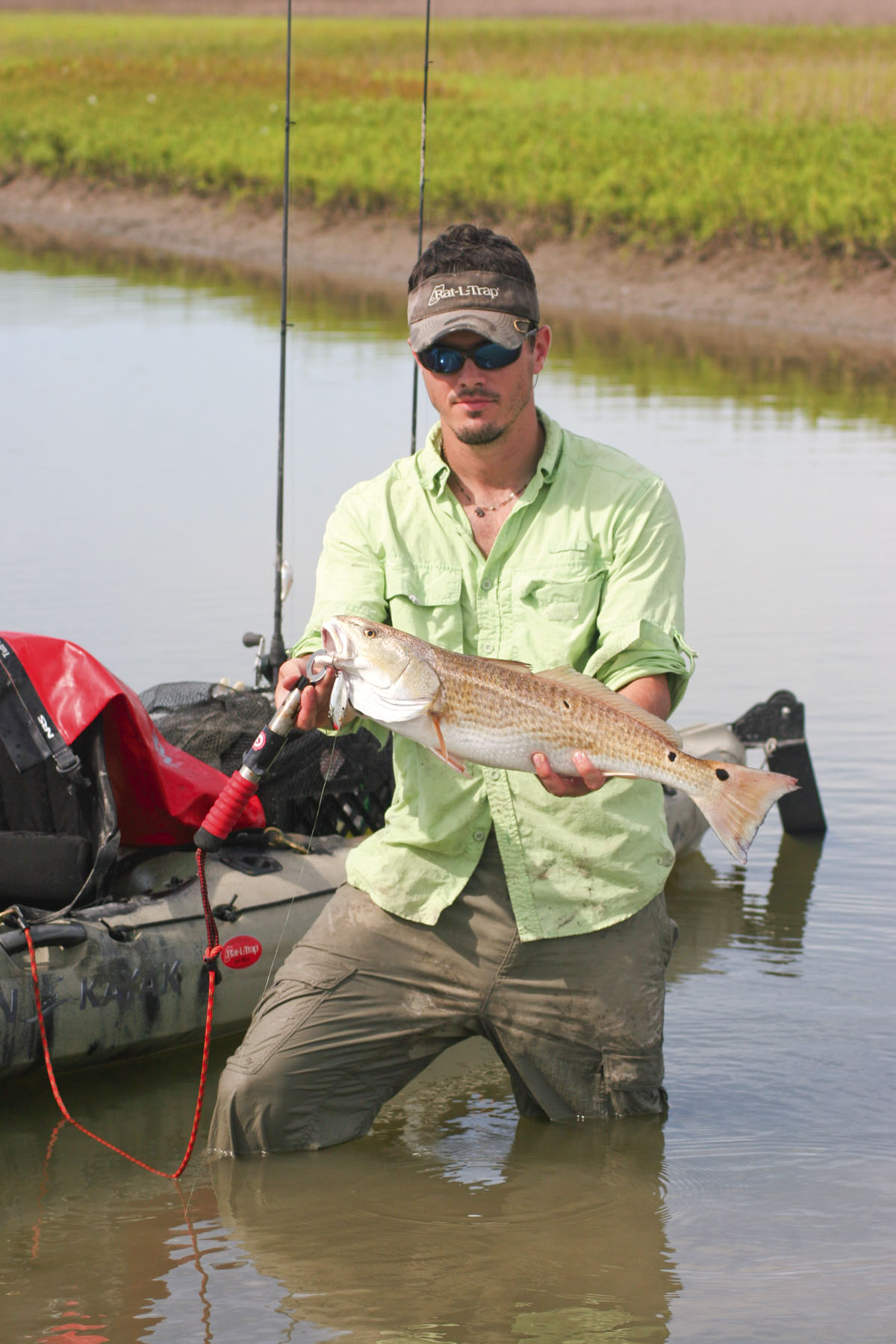 I've said it before but I will say it again, there isn't much in the angling world that is more fun for me than chasing reds in skinny water. Well another non-secret is that kayaks are tailor-made for fishing super-shallow water. What would you say then if I said my most recent trip involved fishing water that was too shallow for kayaks?

As usual, seeking a fishing adventure, Cliff and I headed to the coast with our kayaks in tow. The launch and main leg of our paddle was relatively normal. However, we knew we were going to be met with super-shallow water once we reached our spot. Sure enough, it's as if almost instantly, we went from easy paddling to dragging bottom. A look out in front of us brought smiles to our faces though as we were greeted with the backs of numerous redfish breaking the surface as they roamed the shallow flat. Before I even grabbed a fishing rod, I grabbed my video camera to log a bit of the action. A few minutes of film and then it was game on.

Cliff quickly abandoned his kayak, only carrying his favorite rod, and trudged across the flat chasing a wake. Cliff landed the first fish that he targeted with a soft plastic lure. What a scene watching it thrash around in what was probably only four or five inches of water.

Wanting to keep my still-photo and video cameras handy, I actually drug my kayak with me. I wasn't as mobile as Cliff but I remained effective nonetheless. I had decided that I wanted to try the floating version of the Rat-L-Trap and had it tied on for my first attempt at sight-casting the shallow water. It worked. Perhaps by the time you are reading this article I will have the GoPro video of me landing this specific fish loaded to Youtube.

After landing a few fish with pretty much replays of the first I made the decision to shift into more intense photography mode. Chasing fish through the shallows landed me in a large pocket, back in the corner of the marsh flat. Approaching the area was a similar to the start of the day, where I could see numerous backs of reds breaking the surface. I slowly eased up one of the grasslines and noticed a couple of reds headed right toward me. Wanting the best angle I got down on my knees in the mud and inched forward. I was clicking off photos left and right as the pair approached. They just crawled along and probably got within six feet of me at one point. Never spooking, I observed them continue on in their prowl. I photographed a few more fish in this same manner before Cliff caught back up with me.

Then it was time to shoot some images of Cliff stalking and hopefully landing a couple of fish. Got a few great shots out of the scene.

All in all it was an action packed morning. Heck, we decided to call it a day not too long after 9:00 AM, yet I felt like we had been out there much longer. I will say this about wading/trudging around the marshes, you have to be cautious about oyster shell. There is virtually no shell present in the area Cliff and I were fishing so we were able to efficiently walk around the area without fear of stumbling and being cut by shell. If you find yourself needing to exit your kayak in order to get after some super-shallow fish, be sure to use good judgment. Loosing your footing and ending up on your knees or worse in heavy oyster clumps could be very dangerous!

This month I got a call from a fellow Texas kayak angler, Mr. Frank, from down south. He asked me about my thoughts of the use of his particular kayak in the surf. He has a 12 foot model and had said that some others had questioned its abilities BTB.

My viewpoint on the matter goes something like thisWhatever kayak you have to fish the surf is better than having no kayak. Sure, maybe there are more ideal models but who is to say that any one model is wrong?

Think of it this way, regardless of the style of kayak fishing you are doing, if you are able to go out and enjoy yourself and accomplish what you wanted, then you have the perfect kayak. It is only the wrong kayak if you are truly not able to do what you want to do with it - safely. And I stress that safety consideration very strongly. In the case of the surf before you commit a whole first day to fishing from any kayak in the surf and BTB It would be a good idea to get some surf kayaking under your belt and then go fishing.

Furthermore, I encouraged that he get a VHF radio, and tether EVERYTHING to the kayak.

I hope these thoughts and suggestions help you out, Frank. Best of luck on the water. -Cade