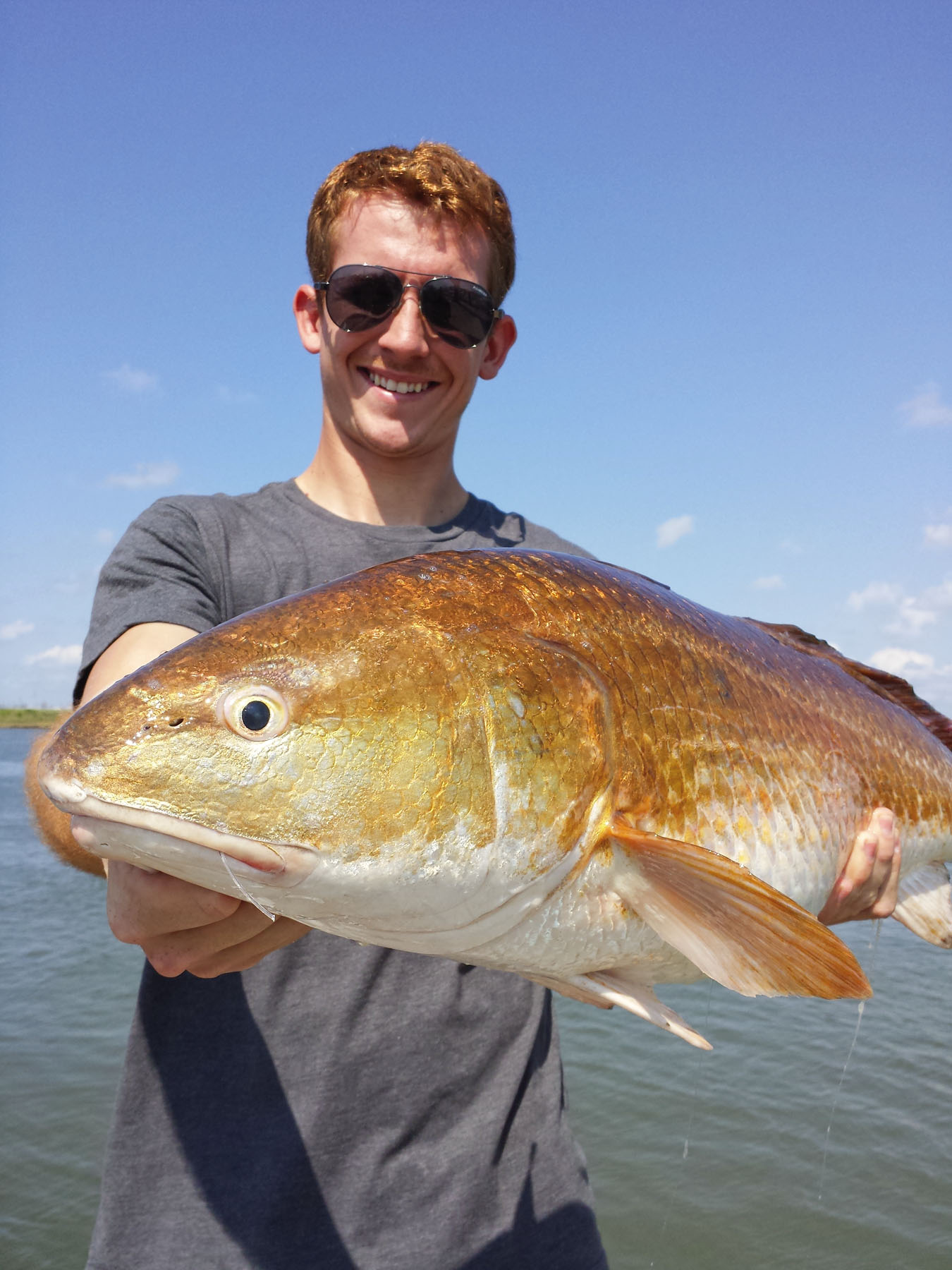 A yak carrier build; first-ever marsh red from a yak story and giant bull reds off the beach of Surfside...

I got a new truck a couple of months ago. Until then I was using my trusty old Jeep to haul the yaks around. I had crossbars on the roof of the Jeep and would strap the yaks to the top. With the truck and the wish to not have to lift kayaks over my head anymore, I took to the drawing board and came up with a design to build my own bed extender for transporting the kayaks in the bed of the truck.

Using 2-inch square steel tubing I ended up with a rack that extends my bed a full six feet, with the tailgate down. I have a shortbed pickup and a toolbox in it. However, with the tailgate down I have a tad bit over 12ft of "base". My long kayak being about 15.5ft, the rack gives it good support. I trimmed a swimming pool noodle to create a saddle of sorts for extra support. I also used the rack to haul some lumber sixteen feet in length a couple of weeks ago handy.

Two months ago Cliff brought an old fishing buddy of his along on a kayak trip we had planned. Todd had never kayaked before but handled the day quite well. Fishing was a bit slow for all three of us on that trip but it was a pleasant day and it is always nice to be out on the water. Just last week Cliff got Todd back out in the marsh in the kayaks and Todd was able to land his first-ever kayak marsh redfish. Todd is unaware that I had Cliff send me the photo of him and his fish so Todd if you are reading this, congrats.

On the topic of first ever reds I also want to give congratulations to my Buccee Nugget eating cousin Will, his cousin Brenton, and Will's soon to be brother in law, Matt. I was able to join them on a nearshore trip out of Surfside a few weeks back. We had a good guide who put those three young men on all the bull reds they could handle. It was a great day with family and friends. That's what it is all about in the end.

I've said it before and I will say it again, I truly appreciate those who shoot me an email with kayaking questions or just to say "Hi."

I recently received a great email from Jose in Round Rock, TX. He tells me that he and his buddies have really gotten into fishing the gulf in the past year or so and they plan to commit themselves even further in the coming year and they intend to make kayak fishing their priority. Jose had a couple of questions as it relates to kayak fishing. They are as follows:

Q: What would you recommend to three guys who live in central Texas and want to start kayak fishing?

A: Jose, I think kayak fishing is a great idea for you and your buddies. Kayak fishing is very manageable in that you don't need boat storage or an extra garage to house your boat, not to mention the lower maintenance costs. Its relaxing, good exercise, and you really become in-tune with nature.

Q: Also, what is your opinion of our choice? In particular, the brand of kayak, the size, and probably the most important, the trolling motor option.

A: I will be honest Jose; I am a bit of a purist when it comes to kayaks. I prefer kayaks that don't have trolling motors. Paddling to and from is part of the work/fun. With a trolling motor on a kayak you can't draft nearly as deep either. Good brands would be ones such as Ocean, Hobie, Jackson, and Wilderness Systems. The Hobie's are interesting in that they do have a foot-propel option but it can be removed when you go shallow. I like longer kayaks. My main kayak is 16ft long. It is stable, comfortable, speedy, and tracks straight. Get a rudder on your kayak, single best add-on you can have. A close second is a good seat. Good luck on your fishing endeavors.