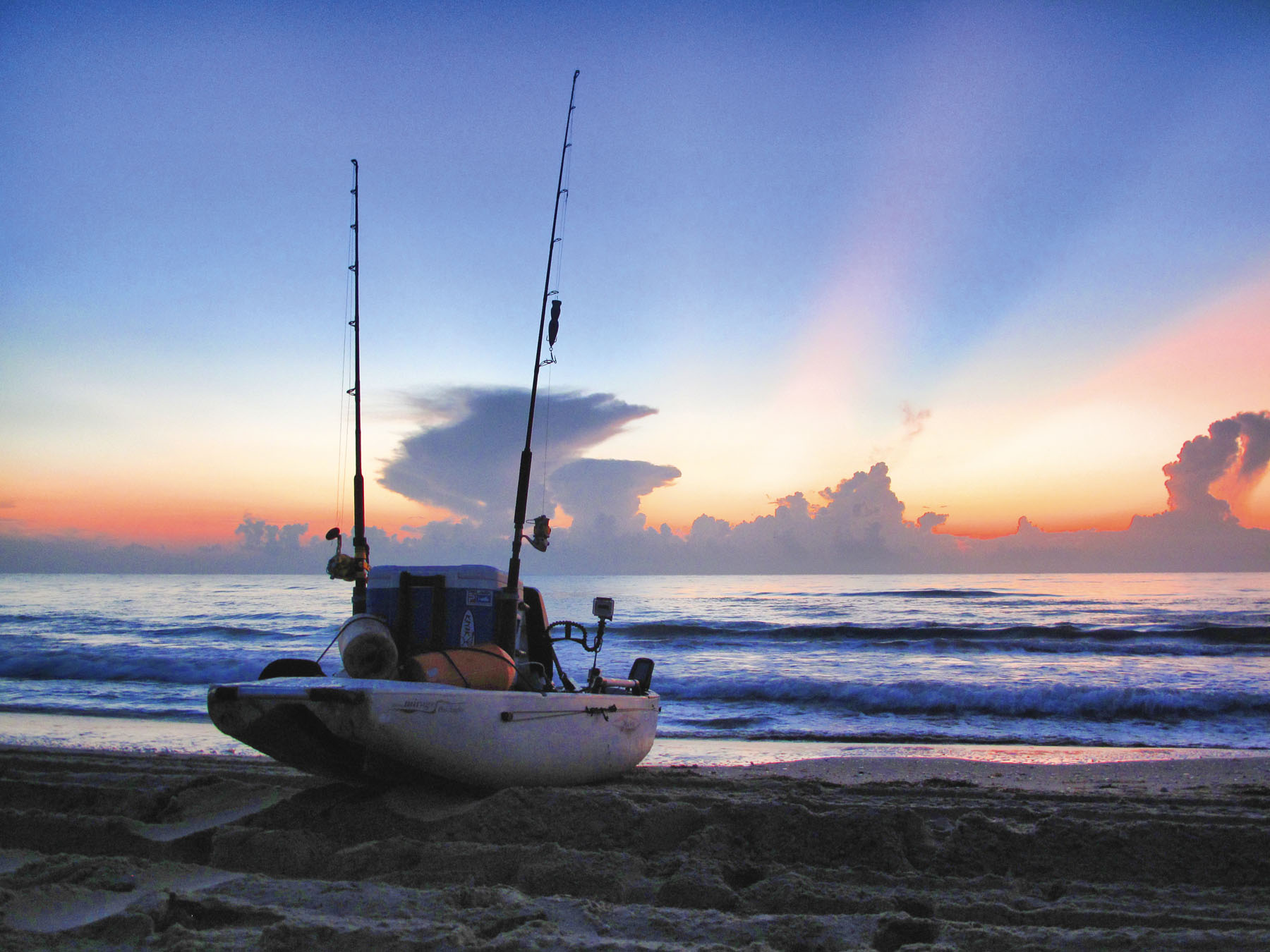 Sunrise weather opportunity.
Sudden squalls, high seas, and lurking sharks are some of the hazards that "beyond the breakers" kayaking can mischievously throw at us. And serious as these can be, they are but a fraction of the dangers that kayakers venturing offshore will likely encounter during their career. With the number of people exploring the world of kayak fishing growing daily, the number of accidents and dangerous events encountered has also skyrocketed. Make no mistake, with the exception of perhaps spearfishing, offshore kayaking is potentially one of the most dangerous methods in all of fishing. Offshore on a relatively small piece of plastic, danger can come without warning. However, being properly prepared, keeping your wits about you, and remaining constantly alert, can very well save your life and certainly make the experience more enjoyable.

This past summer Mother Nature gave us an extremely tough season. It started off great but in late June a rather strong and unusual frontal boundary came blasting through. At the time it arrived I was coming in from a billfish trip aboard a large sportfisher, getting annihilated by 35 knot north wind. This particular storm had reportedly blown a kayaker far offshore, requiring a Coast Guard rescue. When July came, winds blew relentlessly from the south and southwest offering the Texas coast only a handful of windows. Fortunately, dust coming off Africa has greatly inhibited the development of any tropical systems in the Atlantic, even through early August. But overall, the conditions have just not allowed many to venture out during much of this summer. With all this being said, September is here and things are about to get ridiculously good out beyond the breakers!

As fall approaches, the nearshore activity blossoms into welcomed chaos. Beginning at the beach and stretching several miles offshore, the entire food chain that supports the Gulf's gamefish species is present in full force. If Mother Nature will allow, our fall season could shape up to be nothing short of spectacular.

King mackerel, jacks, tarpon, and cobia will own the September shallows, while out in waters of 7 to 10 fathoms the opportunity to encounter a sailfish or dorado becomes very real. And believe it or not, over the past decade, migrating whale sharks have been sighted by kayakers on more than one occasion in South Texas. Inevitably, with all this opportunity at hand, kayaking anglers will arrive in droves to participate in the madness. Despite the enthusiasm of the anxious anglers, the dangers associated with this sport remain very real and safety must be addressed seriously.

The cardinal rule of beyond the breakers kayak fishing is to always go with at least one other fishing buddy. It may be very tempting to deny the necessity of this rule when the action looks too good to pass up, but be advised that several lone kayakers have lost their lives over the years and this could have been prevented had they been accompanied by another kayaker. Even with a young and generally fit individual unexpected situations could compromise your health and your safety. With our intensely hot summer temperatures heat stroke is a major contributor to kayaking accidents. Keeping thoroughly hydrated is essential. Another factor is sea sickness. I have seen people who have never been prone to sickness aboard any vessel get sick in a kayak during moderately rough seas. In the event one turns green, immediately head back to shore and make sure to keep hydrated.

Inclement weather is the single-most dangerous force facing the offshore kayaker. When fishing a mile or two from the beach even a squall of modest strength can be life threatening. NEVER venture offshore when a cold front is approaching the coast. You will be blown out to sea and not likely to win a battle with oncoming wind and waves. Summer and early fall will have squalls that will randomly pop up out of nowhere and often produce heavy rain, gusty wind, and deadly lightning. I heartily encourage that all offshore kayaks carry a VHF marine radio and monitor the marine weather forecasts. Heeding weather warnings can save your life!

A very important note here: Anytime lightning is seen or even distant thunder is heard, immediately lay all your rods down in the boat. Standing in rod holders or held in your hands, fishing rods are a virtual antennae for disaster.

Not all dangers can be foreseen or prevented. It is the law that you have a whistle for signaling and a PFD on your kayak which by the way I highly suggest you should be wearing at all times offshore. There are times when the seas can be relatively calm, yet offshore currents could be raging like a river. Tying up to a rig or anchoring in large seas and strong current could pose stability problems, and falling out of the kayak poses an even bigger problem. If things get hairy, don't risk it get back to the beach. You may lose your chance at the action for that day, but you won't lose your life.

Another point I need to mention; mechanical devices of any kind on your kayak are susceptible to normal wear and failure. This includes pedal-drive systems, rudders and paddles. Hopefully, in a peddle-drive boat, if a paddle is lost or broken you could pedal back to shore. If the rudder system fails you could steer with a paddle. If the pedal-drive fails, start paddling back toward shore immediately but slowly to conserve your energy. It is times like these when a fishing partner is extremely valuable.

Sharks! Some fear them, some pursue them, and ALL must respect them. With the coming of fall along the Texas coast, sharks congregate in and near the surf zone for easy prey. While the chance of a shark randomly attacking the kayak is about as likely as getting struck by lightning; that is not the most probable danger. Fighting a fish that suddenly becomes the target of a shark attack alongside the kayak can be very frightening. The immediate and drastic reaction of the angler might be enough to turn the boat over. The most important thing to do is to maintain your composure. Most shark encounters involve three to five footers, though I have seen some over ten feet. Sharks are curious creatures, not prone to attack you or the boat for no reason. If you encounter them, do not entice them with live fish or fresh bait if you are trying to avoid them. If people only knew how many sharks innocently escort anglers under their kayaks, a good portion of them would never go offshore again.

Safety in the kayak will always remain a very serious matter. No matter how far technology advances, a well built kayak can only do so much to keep you safe and trouble free it is up to you to do the rest in assuring the safest trip possible. Be sure to obey your local and state laws, many of them are put in place for your safety. With the explosion of kayak angling it should not be too difficult to find a fishing partner if you do not already have one. Researching your target destination and being keen on the current weather is imperative. And once again, during any signs of uncertainty or trouble, get back to shore immediately.

Beyond the breakers kayak fishing has been dubbed "extreme" for good reason. Being prepared and continuously safety conscious can provide a rewarding offshore adventure that will live in your memory forever.