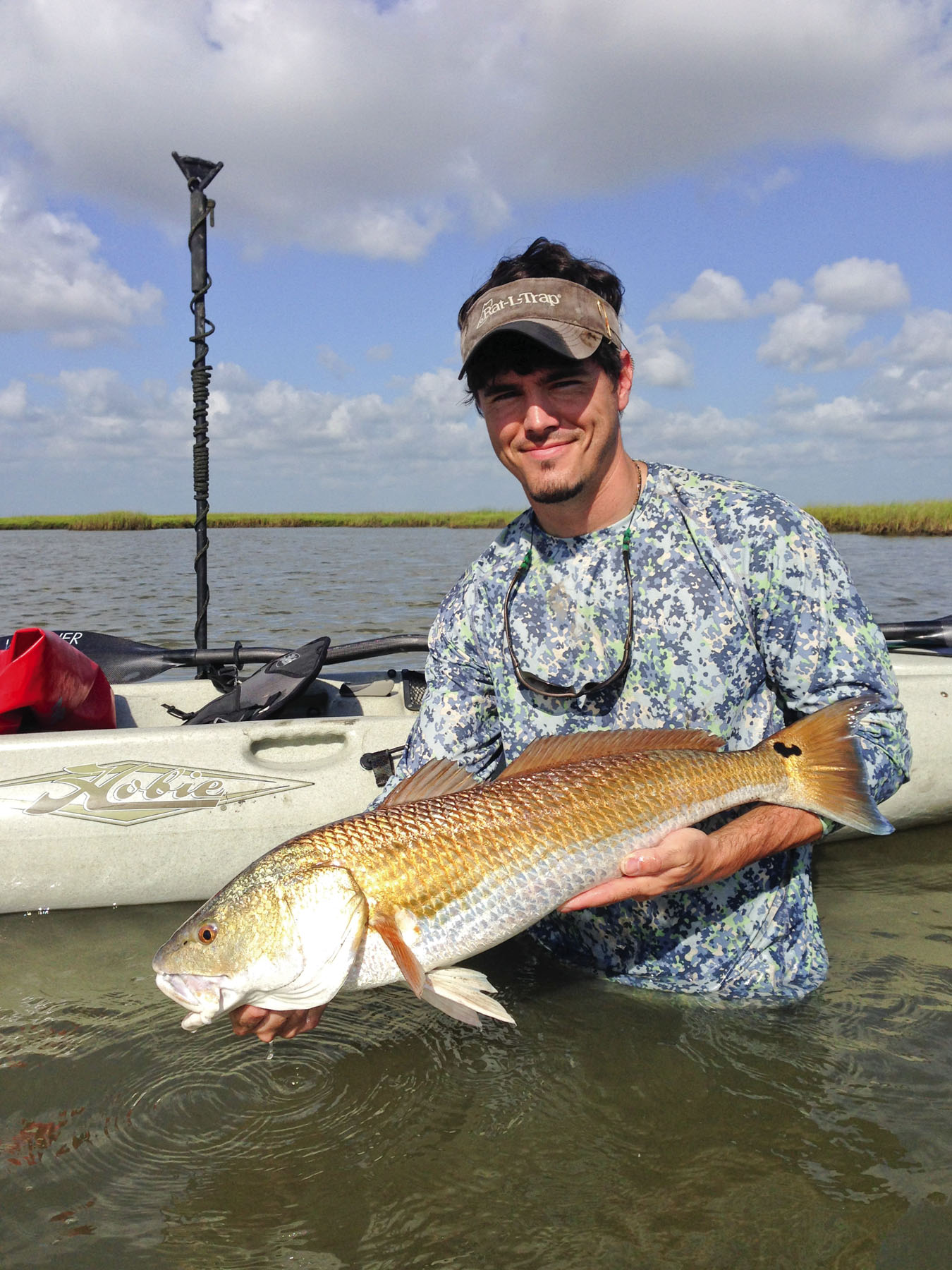 Backcountry reds like this one always make the work to locate them worthwhile.
I greatly enjoy hosting friends on fishing and hunting trips. Being that I am originally from Baton Rouge I have many friends from that area that I keep in touch with, many of whom make a trip or two to Texas each year to join in my outdoor adventures. Recently my good buddy Jonathan made the trek over to Texas for just such a weekend. Jon thought he was in for a peaceful paddle around the marsh. He didn't quite realize (and I didn't exactly clue him in) that there might be a little bit of work to be done to find our fish.

The tide was out, way out. The morning started with us dragging the kayaks through the marsh about 100 yards to a small ditch that would lead us to our main travel canal. Not only was the dragging of the yaks a fair workout, given the muddy conditions and all, but we were being simultaneously attacked by hordes of bloodthirsty marsh mosquitoes.

Once in the water, it wasn't quite so bad, at least for a while. We paddled a couple of miles towards the back of the marsh where we were hoping to find pods of redfish. Probably three quarters of the way there the water began to get really shallow again. More and more frequently, we were having to get out and drag the kayaks where the water was too shallow for them to draft. Eventually this lead to not being able to paddle at all. At this point we were about 10 yards from being in the back pond I wanted to fish.

I left Jon and the kayaks and made my way through the mud up to the marsh grass that blocked my view of the desired area. Once standing in the grass I was overlooking the pond. I slowly gazed across the shallow water. To my right I noticed a group of birds standing in the water and a familiar object breaching the surface that wasn't a bird or a rock. It was a redfish's back. The fish was right amongst the birds, slowly crawling along. I had a rod in my hand, so naturally, I decided to go after it.

Creeping up slowly and quietly I intercepted its line of travel. I placed my Egret soft plastic right in its path, a few yards ahead. When the fish got up to it I twitched the rod slightly and WHAM the fish slammed it. It took off, rooster tailing through the ridiculously shallow water and I set the hook, well tried anyway. Upon my attempt to set the hook, the lure flew from its mouth.

The fish didn't go too far before returning to its slow crawl. Again I went after it. In my pursuit this time, I spooked about a half dozen other fish and began to see many more. I turned back to get Jon. It was serious work trudging through the mud but there were fish everywhere and it just had to be done. I got to Jon and we grabbed a couple of extra Egret baits, a few extra hooks and a pair of pliers, leaving the kayaks beached in the middle of the mud pit.

The next hour and a half was spent creeping as best as we could through the shallow, shallow pond chasing these crawling reds. It was laughable how many there were. They would just about cruise right into us as they searched for prey. The breeze kept what water was there a bit murky so lure placement was key. We honed our casts as time went on and finally we began to get hook-ups. After landing a few we decided to call it a job well done. The walk back to the kayaks was long but we survived.
I was proud for Jon. He caught his first-ever marsh redfish and boy did he work for it. We had a good morning and another adventure and memory for the books.

Until next time, good luck on the water. And always feel free to send me your kayak fishing photos and stories.