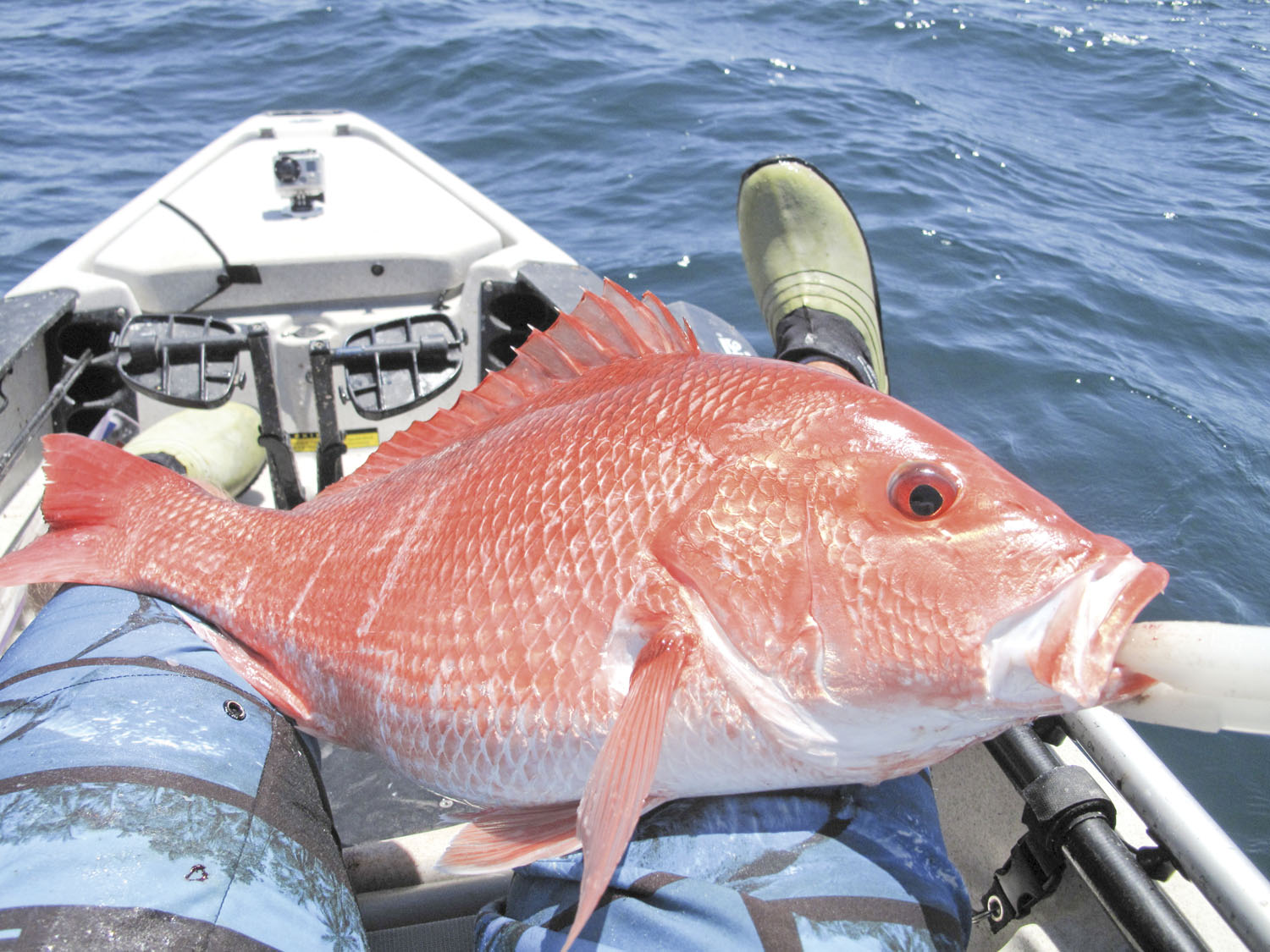 There is perhaps no better month than September for offshore kayak fishing. The early days of fall kick-start migrations of fish large and small. Massive schools of menhaden, shad, mullet, and anchovies will be abundant within paddling range of the beach as endless flocks of screaming gulls and crash-diving pelicans partake from above while a variety of hungry game fish slice in from below. Outstanding angling opportunities abound for smoker kings and tarpon, to mention but two species.

In recent years I have gained greater notoriety as a shark fishermen but it wasn't always this way. More than a decade ago I helped pioneer the style of fishing we call beyond the breakers, my fishing time divided about equally between surf-sharking and offshore kayaking in those days. I have not totally abandoned the adventures of chasing birds and gamefish in the kayak, but certainly not spending nearly as much time in molded plastic as I once did. My passion for this type of fishing still burns as little can compare to the dangerous thrill of being among voraciously feeding predators, including sharks, with minimal protection or safety. This is perhaps the rawest form in which to encounter nature on the water. Adrenaline courses through your veins faster than your brain can process the action surrounding you and this more than anything is why I fell in love with it.

To break down the action we expect to see in September and October, we must first understand what puts it all in motion. Many of our saltwater baitfish species follow migratory patterns. It traditionally gets underway first on the upper-coast as mullet and menhaden make their way out and along the surf zone. Menhaden is perhaps the most attractive food for tarpon of all sizes. Waters off Matagorda Island have been known to fill with feasting tarpon for days. Last year I witnessed silver kings numbering in the hundreds rolling and chasing bait for nearly a week straight in front of my shark camp. If I hadn't seen it firsthand I probably wouldn't have believed it. The same spectacle often occurs further south in the clear water off Padre Island. Jack crevalle are another species that wreak havoc on the menhaden schools and their competitive feeding habit means they will angrily crash practically any lure you choose to toss at them notorious for aggression toward topwaters.

Menhaden are probably the biggest attraction in creating frenzies but the speed at which the schools move can make it hard to keep up in the kayak. Fortunately, they are not the only bait species receiving attention. Here along the Coastal Bend huge baitballs of dusky anchovies begin to form and maneuver southward just past the breakers. This is the kayak angler's green light to pursue a variety of hefty gamefish. The chaos that erupts is nothing short of something you might see on National Geographic programming. When viewed from the kayak amid acres of bait you gain a greater appreciation for the mechanics of the food chain. One of the greatest thrills is a monster king mackerel rocketing airborne with his jaws clamped tightly on your topwater. One must be careful within the proximity of so many predators though for sharks are usually around, whether or not you can see them.

The Holy Grail for Texas kayak anglers is a billfish and as you might guess only a handful have been landed in our waters between August and October when the anchovy baitballs are present. I have been lucky only a few times to see sailfish from the kayak and these occurred during feeding frenzies. Your best shot at a sail is to "dreadfully" troll ribbonfish or skirted ballyhoo behind the kayak. I reiterate dreadfully because the number of other predators is so great that it is almost impossible to get a bait past the Spanish mackerel and kingfish. In addition, the same as in spring, cobia reappear in full-force during fall. No surprise, their arrival coincides perfectly with the bait movements. Many times I have chummed cobia to the kayak with cut mullet or menhaden. If you get and hook one, be very careful if you decide to gaff a cobia from the kayak for they are very energetic and go berserk. Kayak anglers have been known to fall off or flip the kayak when gaffing a cobia. Gaffing is a one-way deal so be sure that your cobia is unquestionably of legal size before you do stick it.

Structures such as jetties and nearshore oil platforms can have equally impressive action this time of year. Oil rigs just a couple miles out will tend to hold massive schools of bait. Cobia, king mackerel, and red snapper can become very plentiful. I have seen and videoed schools of red snapper on the surface devouring anchovies. Take note that these baitballs will often use your kayak as shelter. If and when this happens, despite how "cool" it may appear, you need to immediately paddle away from them. Sharks cruising the baitballs often slice through with explosive power to stun prey and I have had sharks accidentally ram the kayak during these speed bursts. While I have not been thrown out during these episodes, this is certainly not the place you want to fall into the water. Large species such as tarpon, jacks, and sharks could all be around and feeding at the same time. Sometimes you will be able to specifically target the species or even individual fish you want. The possibilities with the autumn run beyond the breakers run are virtually endless.

Before we all get too happily carried away, know that beyond the breakers kayak fishing is dangerous and accidents have happened. The need for safety cannot be expressed strongly enough, especially with the growth of kayak fishing in general and the inexperienced newbies so eager to get out on the water. This unique genre of kayak fishing pushes personal boundaries and yet always seems to pay off with incredible results. With game fish activity about to reach its peak for the year, dreams of trophy fish from the kayak may just come true for anglers willing, capable and prepared to go for it. While my personal schedule is quite full with surf and shark charters, rest assured I will get out in the kayak every chance I can in the coming months. If you practice safe and responsible kayak fishing, you too may be in for the time of your life!