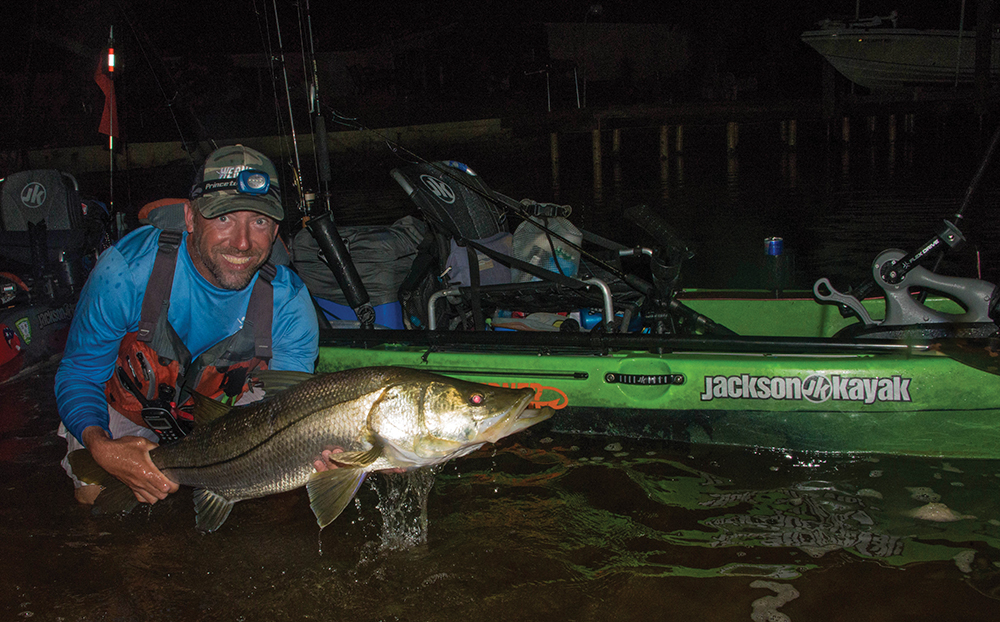 If you are a regular reader the past couple of years you likely remember that I make an annual trip to South Florida each summer for snook fishing. Back in January, when I picked up my new 2019 calendar, one of the weeks I blocked off immediately was in mid-August for Snooktopia. This is the third year my buddy Bart has put the event together in his old stomping grounds and I was sure hoping not to miss it.

With this being my third Snooktopia I had a much better feel of what to expect. I made a run to our local tackle shop and decided I was going to try my best and keep it simple like I always do. I grabbed a few packs of Magnum Zoom Flukes, Keitech swimbaits and a Super Spook figuring that would be a good start. I also grabbed a supply of AFTCO fluorocarbon and 6/0 circle hooks for live bait fishing. So, with all my gear loaded I put on some good tunes in preparation for my 15-hour drive.

Lots of pavement to stare at but I finally made it to Jonathan Dickenson State Park and could not wait to get on the water. I unloaded all my gear and started to rig rods. I figured 20 lb. fluorocarbon would suffice for throwing along the edge of the mangroves. I rigged that rod with a weightless Magnum Fluke and the other with a Super Spook. I quickly headed to the water, launched, and was filled equally with excitement and relief to be back on the Loxahatchee River.

I began making my way down the river to refamiliarize myself and everything came back to me immediately. Fortunately, it was mid-week and I practically had the place to myself. I eased around the first major bend, made a cast and almost instantly felt my line get heavy. The fight was on and I landed the first snook of the trip. After a quick picture I released her back into the river to make someone else’s day.

I continued around and came to an area that had a deeper cut feeding into a back pond. I could see water flowing through the cut and it had mangroves hanging around the edges. This is a perfect spot for a snook to be sitting. I fished it for 5-10 minutes and as I was thinking about moving on, a familiar thump came. This time I knew it was a bigger snook and that I needed to get it out of the mangroves quickly. I tightened my drag and began paddling backwards to pull her away. She gave me a few good headshakes but never could shake the hook. By far, she was the biggest snook I have landed on artificial and was probably around 30-inches. I fished the rest of the evening but those were the only fish I caught.

Later that night Bart and his buddy James made their way into camp and we made plans to hit the water early. We ended up meeting Bart’s brother and his son at the launch a little after daylight. We paddled around the corner and began the most important task of the day – catching bait. In past years, catching enough bait proved difficult but fortunately it came much easier on this day. We then decided upon a plan to split up; Bart and I cutting across the channel and the rest of the group paddling north.

We paddled along and were pitching free-lined mullet along bulkheads and under docks. I ended up getting a few docks ahead before I noticed him just sitting in one spot. I figured he must have been onto something since he hadn’t moved in a while. It wasn’t long until I heard him yell and saw him getting dragged around for a few seconds. I got closer to him and he told me that he just had a monster break the line. He said that he could see her back in the mangroves and he pitched his mullet to her when he had a clear shot. She came out, followed the mullet, and inhaled it. Guesstimated  every bit of forty inches.

Excited now, knowing that they are eating, we continued on and kept the same approach. A few docks further up we both saw a snook blowup a mullet on a bulkhead. I ease up to the dock that was closest to it and quickly realized that a mid-thirties snook was swimming toward me. She was so close that I didn’t even have to pitch my mullet – only let a little slack out and drop it. She quickly picked up on the bait and attacked it right beside my kayak! She took off like a rocket and didn’t take long for her to drag my line through the dock pilings and break me off. I was completely okay not landing that fish, given that I got to watch her eat right beside the kayak. One of the coolest sights I have ever witnessed.

As the day went on we caught a few jack crevalle – another species to cross off the list. I had hooked several but never accomplished the landing. We met up with the rest of the group on a sand flat, recounted the fish that had been caught, and stocked up on bait for the evening ahead. We anchored kayaks as the sun was setting and settled in for a long night of fishing. Between us we landed a few low- to mid-30s snook and took that as a good sign of things to come once the tide was in our favor.

Just as it switched we noticed Bart floating around with some splashing beside his kayak. He began making his way over toward us shouting, “Come check this out if you want to see what a real snook looks like.” Bart hefted the behemoth and we snapped photos and made quick measurements before sending her back on her way. Bart’s snook touched the coveted 40-inch mark and is a prime example of the opportunities that await in the river.

We were lucky to land some really great fish during the first two days on Snooktopia 2019 and, on top of that, bait was easy to come by. We had more people scheduled to join the group the next day and we were content in the knowledge of knowing where willing fish were holding. Three more days of fishing, we retired for the night hoping it would only get better.